Top Democratic Senate leaders are attempting to block the passage of the bill.

WASHINGTON (AP) - A Republican policing bill hit a roadblock Wednesday as Senate Democrats voted against it as inadequate, leaving the parties to decide whether to negotiate a compromise or walk away despite public outcry over the killings of Black Americans.

The impasse threatens to turn the nationwide protests over the deaths of George Floyd, Breonna Taylor and others into another moment that galvanizes the nation but leaves lawmakers unable to act. Common ground is not out of reach.

But the legislation is stalled, for now, with Democrats refusing to agree to open debate as they push for greater changes in police tactics and accountability.

“If you don't think we're right, make it better, don't walk away,” implored Sen. Tim Scott of South Carolina, the only Black Republican senator, and the author of the GOP bill.

Yet the outlook is deeply uncertain with Congress unable to swiftly respond even as the public demands policing changes. Much as lawmakers have failed to act during times of crisis on gun control or immigration changes there's a familiar standoff despite broad support. An Associated Press-NORC Center for Public Affairs Research poll shows almost all Americans support some degree of criminal justice changes.

Ahead of the vote, Senate Democratic leader Chuck Schumer said, “My hope, my prayer, is that after this bill fails today... we can start on the path of bipartisanship.”

The GOP's Justice Act is seen by Republicans and Democrats as a starting point in the broader debate over how best to change policing practices as demonstrations in cities large and small focus on law enforcement and racial injustice. It would create a national database of police use-of-force incidents, restrict police chokeholds and set up new training procedures and commissions to study race and law enforcement.

The package from Republicans is not as sweeping as a Democratic proposal, which mandates many of the changes and would hold police liable to damages in lawsuits. There are similarities on some issues, lawmakers say, but also vast differences. 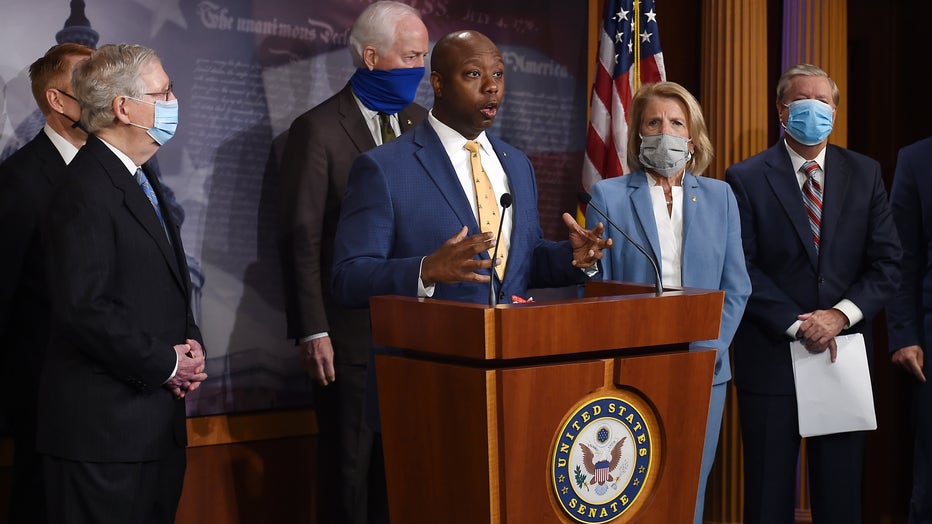 Senate Majority Leader Mitch McConnell (L) listens to Sen. Tim Scott (R-SC) speak during a news conference with other Republicans to announce that the Senate will consider police reform legislation, at the US Capitol on June 17, 2020 in Washington, D

With the Democratic bill headed for a House vote Thursday, support is growing from high-profile backers. Hundreds of celebrities, actors, musicians and industry leaders including Rihanna, RZA, Elon Musk and mayors from cities nationwide signed on to a support letter obtained by The Associated Press and being released Wednesday.

Civil rights leaders and the Congressional Black Caucus urged a no vote on the GOP bill. Law enforcement and business groups including the U.S. Chamber of Commerce have urged both parties to find common ground.

Ahead of Wednesday’s vote, Trump tweeted his support for the GOP bill. He said it would be “great for both people of color and police.” Trump tweeted, “Hope to sign it into law ASAP!”

During a GOP lunch Tuesday, Scott played for colleagues the racist voice mail messages he has recently received, according to a Republican granted anonymity to discuss the private meeting. Senators were shocked, and some suggested Scott needs security protection because some of the calls were threatening, said a Scott aide. The senator is considering options, his aide said.

As talks potentially continue, Democrats are trying to force Republicans to the negotiating table to strengthen Democrats' hand. The House is set to approve the Democrats' bill later this week. The two bills, the House and Senate versions, would ultimately need to be the same to become law.

Neither bill goes as far as some activists want with calls to defund the police and shift resources to other community services.

House Speaker Nancy Pelosi has indicated she is eager to enter talks with the Senate, a signal the door is not closed to compromise.

But in a CBS News Radio interview Tuesday, Pelosi said Republicans need to step up with a better bill. “They were trying to get away with murder, actually — the murder of George Floyd.”

The comment drew sharp rebuke and calls from Republicans for her to apologize.

“We’re ready to make a law, not just make a point,” McConnell said as he opened the Senate on Tuesday. He said Americans “deserve better than a partisan stalemate.”

Political risks of inaction are high, as the public wants to see policing changes after nearly a month of constant demonstrations nationwide, in cities large and small, forcing a worldwide reckoning over law enforcement and racial injustice.