Early voting is underway in Texas for runoff races that were supposed to happen in May. The pandemic pushed it back.

COVID-19 was one of the first topics discussed by the two Democrats hoping to take on Republican U.S. Senator John Cornyn for his senate seat.

Royce West and M.J. Hegar started the debate peaceful. But it ended with the two arguing over Hegar, a Democrat, donating to Republican Senator John Cornyn years ago.

As Texas reported another record day of coronavirus hospitalizations and more than 4,000 new cases, the two Democrats vying to take on Sen. Cornyn faced off in a virtual debate hosted by KVUE in Austin Monday.

West and Hegar differ on experience but agree when it comes to the state's and country's handling of the crisis.

“We should never ever put profit above public health. We know what the issues have done,” West said.  “We know what other countries have done to flatten the curve."

“I’m seeing a lack of crisis management,” Hegar said. “Maybe that is because I spent 12 years in the military, and I am used to watching how true leaders lead through a crisis. I would like to see us listen to nurses and front line workers.” 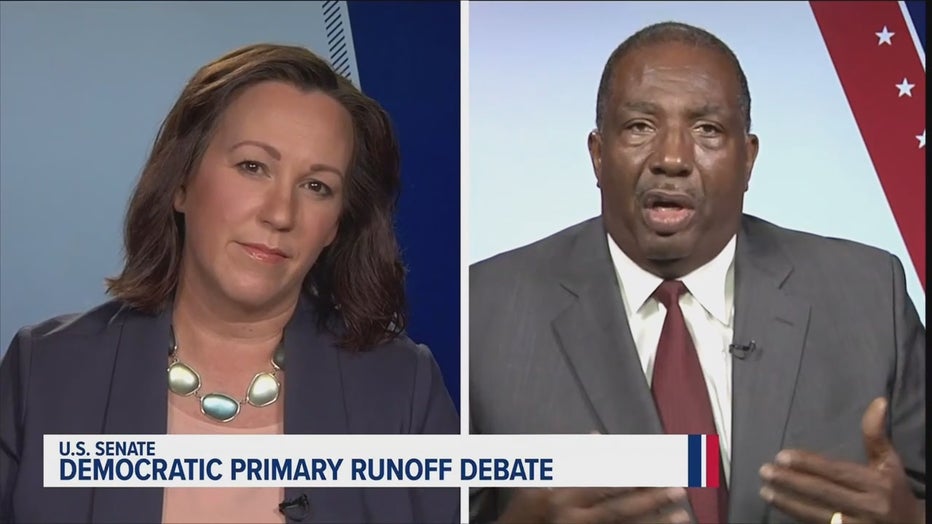 In March, Hegar came in first during the 12-person Democratic primary. West got second place about eight points behind Hegar.

Looking for a way to stand out in a race where they agree on many topics, West went after Hegar asking her directly about a donation she made to Senator Cornyn. He also asked her if she ever voted in a Republican primary.

“I’m disappointed because this is why people tune out. I donated $25 to John Cornyn because I couldn't get a meeting with him if I wasn't on his donor list,” Hegar said. “That is when I made the commitment to run for office. Because it’s disgusting that you have to write a check for $25 to get a meeting with your representatives.”

“People have a right to know,” West said. “In terms of you taking a shot at me, I am from the projects of Dallas. If you are taking a shot at me because I have been a successful lawyer basically providing job opportunities for people in my community, then take that shot.”

“Unfortunately, I think John Cornyn is the person who won tonight,” Hegar said.