A roundtable discussion in Fort Worth on the health threats of e-cigarettes featured politicians, doctors and young people.

FORT WORTH, Texas - A roundtable discussion in Fort Worth on the health threats of e-cigarettes featured politicians, doctors and young people.

The event was hosted by U.S. Sen. John Cornyn (R-Texas) as a bill that would prevent online sales of e-cigarettes to teens and kids is being considered in Washington.

The bill would apply regulations already in place for online sales of cigarettes and tobacco products to cover e-cigarettes also. It would require an ID for delivery and require online retailers to verify a customer’s age.

“This is a full blown public health crisis,” Cornyn said on Friday.

“We’re not talking about informed choices made by consenting adults, we’re talking about a campaign to addict children to nicotine,” Cornyn said. 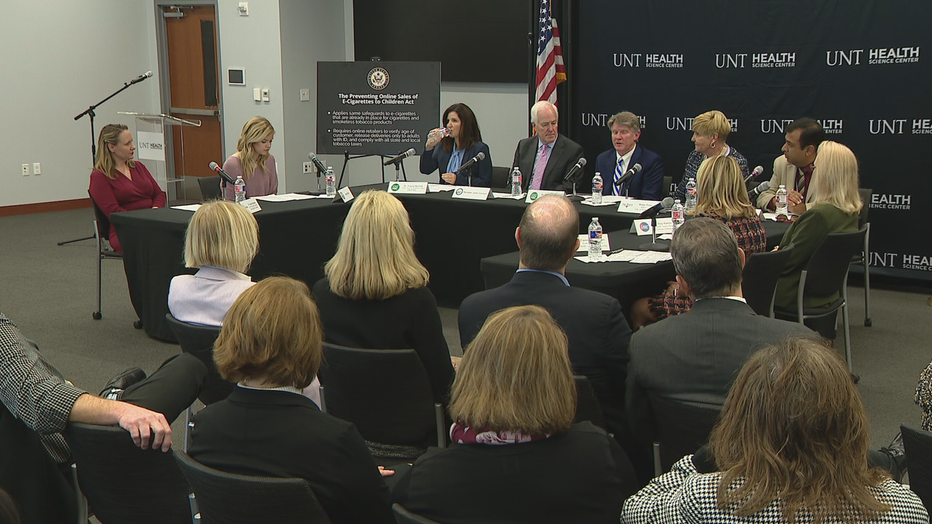 Anna Carey, 16, said she started using e-cigarettes when she was a freshman in high school to the point where she became addicted.

“My siblings would buy it for me, because I had withdrawals and you get really angry when you stop vaping,” Carey said.

“It was the worst pain I’ve ever felt in my entire life. You don’t realize how much you need to breathe until you can’t anymore, and I couldn’t move without a shoot of pain going straight into my chest,” Carey said.

Experts say the legislation is a start, but more needs to be done. Some suggested a possible ban on flavors in e-cigs.

“We don’t know still what’s in these and we don’t have legislation and regulations in place to manage the product itself,” said Dr. Tracey Barnett, UNTHSC associate professor and associate dean.

Cornyn said the bill has support from Republicans and Democrats. Even though there has been some pushback from companies that market the products, Cornyn said the hope is to get the bill passed through the senate as early as next week.