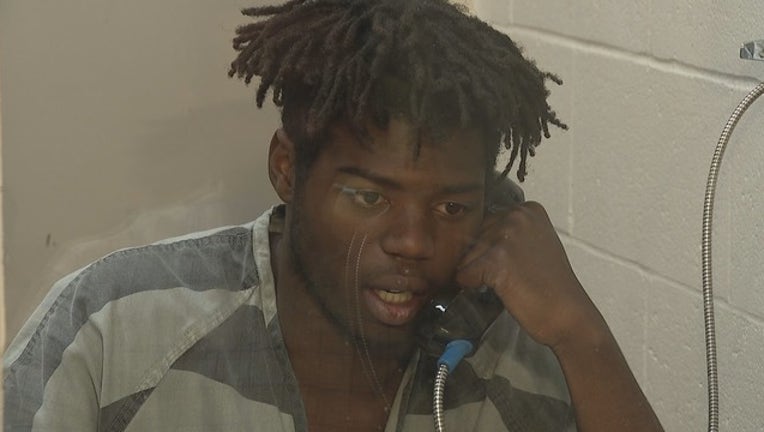 A Dallas man accused of capital murder in the death of a nine-year-old girl said he was innocent in an exclusive interview with FOX 4.

Davonte Benton is one of two capital murder suspects arrested in the Brandoniya Bennett case. He was taken into custody last week, nearly a month after the girl’s death.

“They was like, they have evidence against me. There was people that say I was there,” Benton said in an interview at the Dallas County Jail on Tuesday.

Bennett was inside her family's apartment when she was struck by gunfire that came from outside. Investigators have yet to release details about his alleged involvement in the dispute that led to shots being fired. Police previously said the shooting was a part of a feud between aspiring rappers and the wrong apartment was targeted.

“I mean it's pretty sad, because I know if it were my sister I'd feel the same way that they do,” Benton said.

Benton talked to FOX 4 the day after the mayor's Task Force on Safer Communities held its first meeting at Saint Luke Community United Methodist Church. The 16 members from different backgrounds held their first meeting behind closed doors to come up with a plan of action to address the city's spike in violent crime.

“We believe we all have a common goal and vision and solve this problem,” said Mike Bowie, co-chair, Mayor's Task Force for Safer Communities.

That problem includes 140-plus murders in Dallas so far in 2019, with Bennett's death among the most notable.

“It's a big undertaking but I believe we have the team to do it,” Bowie said.

UTD Criminology Professor Alex Piquero is on the task force and said members have been divided into three subcommittees -- data and community outreach among them.

The subcommittees will do a deep dive into their respective topics and try to come up with non-police led solutions to curb violent crime.

“There's a lot of time investment being put in by the citizens of Dallas for the betterment of the City of Dallas,” Piquero said.