The Jan. 6 committee on June 13, 2022, shared a video of witnesses discussing 2020 election night when FOX News called that President Joe Biden won Arizona – a moment that prompted "anger and disappointment" in Trump’s inner sanctum at the White House.

WASHINGTON - Top government officials and close campaign advisors of former President Donald Trump testified at the Jan. 6 House committee’s second hearing that they believed the defeated president was becoming "detached from reality," clinging to outlandish theories to stay in power.

Trump’s former campaign manager Bill Stepien testified Monday before the House Jan. 6 committee that Trump was "growing increasingly unhappy" at the election results as the night wore on.

Stepien, a key witness, abruptly pulled out of the Monday hearing after his wife went into labor, leading to a delay in its start. The panel showed Stepien’s previously recorded testimony, as well as the testimony from others close to Trump, including daughter Ivanka Trump.

"My belief, my recommendation was to say that votes were still being counted, it’s too early to tell, too early to call the race," Stepien said in the recorded testimony.

Asked if anyone disagreed with him, Stepien replied that Trump "thought I was wrong. He told me so." 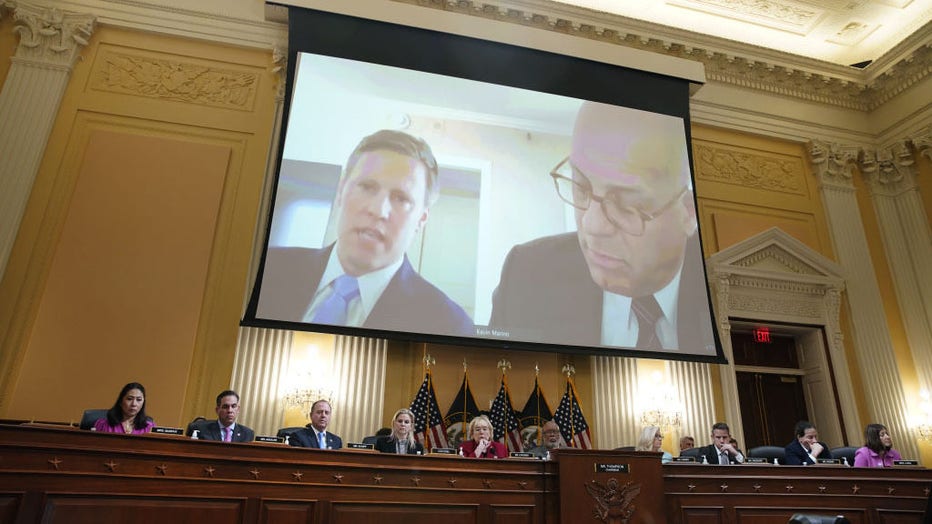 Bill Stepien, former campaign manager for Donald Trump's 2020 campaign, left, and Kevin Marino, attorney for Stepien, displayed on a screen during a hearing of the Select Committee to Investigate the January 6th Attack on the US Capitol in Washington

Son-in-law Jared Kushner tried to steer Trump away from attorney Rudy Giuliani and his far-flung theories of voter fraud that advisers believed were not true.

Former Justice Department official Richard Donoghue recalls breaking down one claim after another — from a truckload of ballots in Pennsylvania to a missing suitcase of ballots in Georgia —- and telling Trump "much of the info you’re getting is false."

"He was becoming detached from reality," said former Attorney General William Barr, who resigned. "I didn’t want to be a part of it."

The witnesses appeared before the House committee investigating the Jan. 6 Capitol attack as the panel focused on the "big lie," Trump's false claims of voter fraud that fueled the defeated Republican president’s efforts to overturn the 2020 election and provoked a mob of his supporters to lay siege to the U.S. Capitol.

For the past year, the House committee has been investigating the most violent attack on the Capitol since the War of 1812 to ensure such an assault never happens again. Lawmakers hope to show that Trump's effort to overturn Joe Biden's election victory posed a grave threat to democracy.

Most of those appearing did so in previously recorded testimony from closed-door interviews over the course of the panel's yearlong investigation. The committee has interviewed some 1,000 witnesses and compiled 140,000 documents, and some members say they have uncovered enough evidence for the Justice Department to consider an unprecedented criminal indictment against the former president. 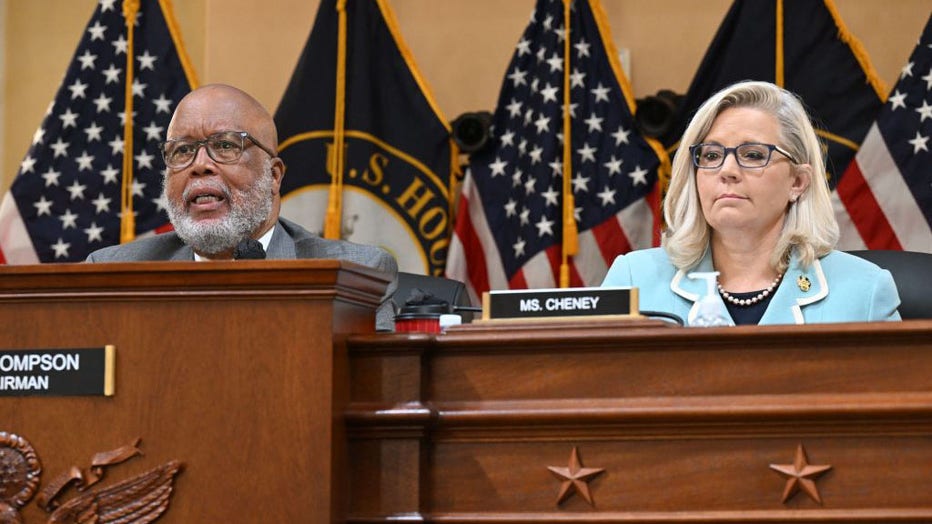 Chairman Rep. Bennie Thompson, D-Miss., opened Monday's hearing by saying Trump "betrayed the trust of the American people" and "tried to remain in office when people had voted him out."

Who are the witnesses?

Stepien, a longtime Trump adviser, has kept a relatively low profile compared with many others in the former president's orbit. He previously served as White House political director and also national field director for Trump’s 2016 campaign.

Instead of his live testimony, the panel relied on Stepien’s previously recorded interview with the panel, given behind closed doors, about what the campaign team was telling Trump as he lost the election.

A longtime Trump ally, Stepien had been subpoenaed to appear at the open hearing.

Stepien and senior adviser Jason Miller testified that the festive mood at the White House on election night turned as FOX News announced Trump had lost the state of Arizona to Biden, and aides worked to counsel Trump on what to do next.

They pushed back against Rudy Giuliani who was encouraging Trump to declare himself the winner. 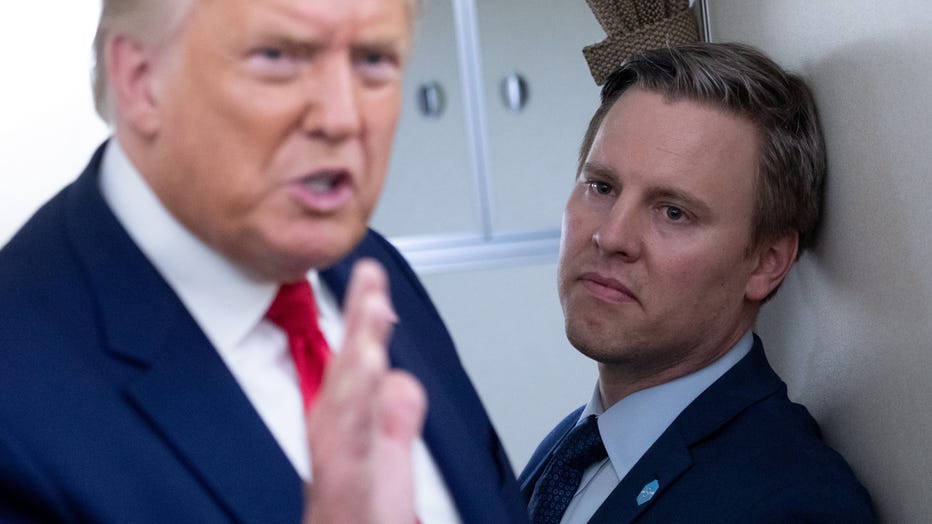 FILE - Campaign manager Bill Stepien stands alongside US President Donald Trump as he speaks with reporters aboard Air Force One as he flies from Manchester, New Hampshire to Joint Base Andrews in Maryland, Aug. 28, 2020, following a campaign rally.

Stepien, who remains close to Trump, oversaw the "conversion" of Trump’s presidential campaign to a "Stop the Steal" effort, according to a subpoena issued by the committee last fall. He was to face questions about what those in Trump's inner circle were telling the president about the election results.

Stepien is now a top campaign adviser to the Trump-endorsed House candidate, Harriet Hageman, who is challenging Cheney in the Wyoming Republican primary election. Before aligning himself with Trump, Stepien had worked in New Jersey for former Gov. Chris Christie, a longtime Trump friend turned critic.

Kushner testified that he told Trump the approach Giuliani was taking was not one he would take. But the president pushed back and said he had confidence in the attorney.

And Barr, who had previously testified in last week's blockbuster hearing that he told Trump the allegations being raised were bull——, revealed in gripping detail how was "as mad as I'd ever seen him" when the attorney general explained that the Justice Department would not take sides in the election.

Monday's hearing also featured other live witnesses, including Chris Stirewalt, a former Fox News Channel political editor who declared on Election Night that Arizona was being won by Biden.

Stirewalt testified in person at the hearing and discussed making the Arizona call — a moment that prompted "anger and disappointment" in Trump’s inner sanctum at the White House, according to campaign aide Jason Miller.

Stirewalt explained that the network, along with others, had expected that there would be a so-called "red mirage" at the beginning of the evening as in-person Republican votes came in, and many of the mail-in votes that would be counted later on would lean Democratic. He noted it happens every election.

Chris Stirewalt, a former political editor for FOX News Channel, made the election night call that President Joe Biden won Arizona – a moment that prompted "anger and disappointment" at the White House.

Trump had not only exploited that pattern to make false claims of fraud but contributed to it in his campaign to call mail-in voting into question.

"We had gone to pains, and I’m proud of the pains, we went to, to make sure that we were informing viewers that this was going to happen because the Trump campaign and the president had made it clear that they were going to try to exploit this anomaly," Stirewalt said.

During the first hearing last week, the House panel probing the attack showed violent video of the siege and showed clips of testimony examining the weeks beforehand in which Trump pushed falsehoods about widespread fraud in the election he lost.

New video of the Capitol Riot, including alleged crimes by the Proud Boys and others, shown at the congressional hearing on June 9. This version includes some censored profanity.

Committee members said Sunday that they’ve uncovered enough evidence for the Justice Department to consider an unprecedented criminal indictment against the former president.

The hearing featured never-before-seen video testimony from Trump’s family and close aides, many of whom were interviewed by the committee remotely.

There was a gasp in the hearing room when Rep. Liz Cheney, the Republican vice-chair of the committee, read an account from inside the White House. When Trump was told the Capitol mob was chanting for Pence to be hanged for refusing to block the election results, Trump responded that maybe the mob was right, that he "deserves it," Cheney said.

Vice chair Rep. Liz Cheney, R-Wyo., outlined what the committee has learned about the events leading up to the Jan. 6 riot putting blame on former president Donald Trump for riling up insurrectionists.

How many January 6 hearings are scheduled?

Monday’s hearing was the second of seven hearings scheduled to examine what happened on Jan. 6 and the events that led up to it. While the basics of the attack on the Capitol are well known, the committee is trying to tell the story of how it happened, and how to prevent it from ever happening again, for history.

The committee has conducted more than a thousand interviews with people connected to the siege and collected more than 140,000 documents.

Cheney said the third hearing on Wednesday will focus on how Trump pushed for the Justice Department to "spread his false stolen election claims in the days before January 6." Senior Justice Department officials refused, telling him his claims were not true.

The fourth hearing, Cheney said, will focus on Trump’s efforts to pressure Pence to stop Congress from certifying some electoral votes for President Biden on Jan. 6 — something he had no power to do in his ceremonial role.

Cheney said the fifth hearing, expected the following week, will focus on the president’s efforts to pressure state legislators and state election officials to change the election results, including additional details about Trump’s call to Georgia officials urging them to "find" 11,780 votes.

She also is promising new details about efforts to instruct Republican officials in multiple states to create false electoral slates and transmit those slates to Congress, Pence and the National Archives, falsely certifying that Trump won states he had actually lost. 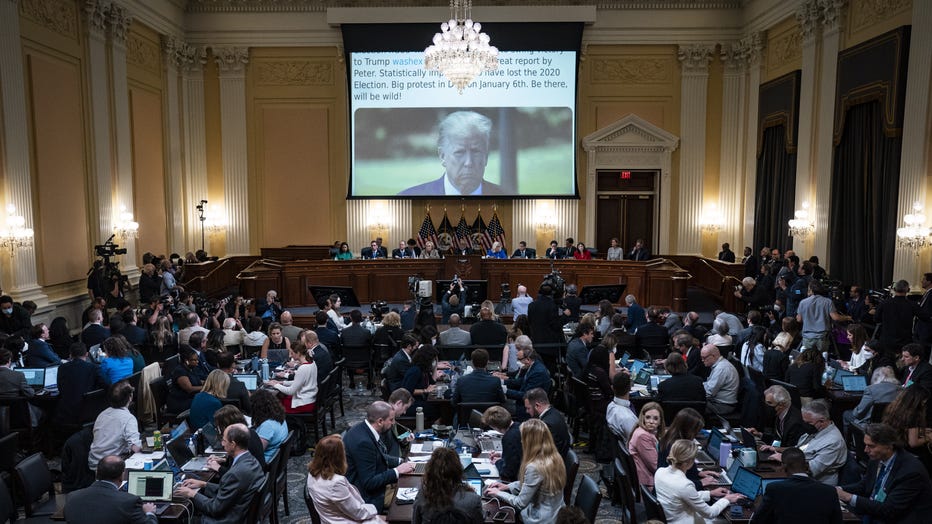 A tweet with former US President Donald Trump displayed on a screen during a hearing of the Select Committee to Investigate the January 6th Attack on the US Capitol in Washington, D.C., US, on Thursday, June 9, 2022. Photographer: Jabin Botsford/The

The final two hearings will focus on how Trump summoned supporters to march on the Capitol, and when the violence was underway, failed to take immediate action to stop them, Cheney said.

The last hearing will have a moment-by-moment account of Trump’s response to the attack from former White House staff, both through live testimony in the hearing room and via videotape.

"There is no doubt that President Trump was well aware of the violence as it developed," Cheney said. "White House staff urged President Trump to intervene and call off the mob."

Can Trump be charged with a crime?

Lawmakers indicated that perhaps their most important audience member over the course of the hearings may be Attorney General Merrick Garland, who must decide whether his department can and should prosecute Trump. They left no doubt as to their own view of whether the evidence is sufficient to proceed.

Garland has not specified how he might proceed, which would be unprecedented and may be complicated in a political election season in which Trump has openly flirted with the idea of running for president again.

No president or former president has ever been indicted.

Richard Nixon resigned from office in 1974 as he faced impeachment and a likely grand jury indictment on charges of bribery, conspiracy and obstruction of justice. President Gerald Ford later pardoned his predecessor before any criminal charges related to Watergate could be filed.

Legal experts have said a Justice Department prosecution of Trump over the riot could set an uneasy precedent in which an administration of one party could more routinely go after the former president of another.

"We will follow the facts wherever they lead," Garland said in his speech at Harvard University’s commencement ceremony last month.

A federal judge in California said in a March ruling in a civil case that Trump "more likely than not" committed federal crimes in seeking to obstruct the congressional count of the Electoral College ballots on Jan. 6, 2021. The judge cited two statutes: obstruction of an official proceeding, and conspiracy to defraud the United States. Trump has denied all wrongdoing.