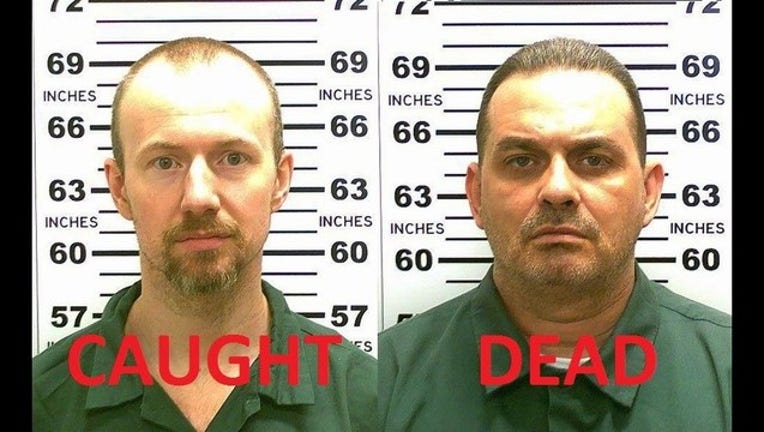 Sweat, 35, had been on the run since he and another inmate Richard Matt broke out of the maximum security prison in Dannemora June 6.

Sweat was shot in the town of Constable, just a couple of miles from Canada, Fox News reported.

On Friday, Matt was killed by a border patrol agent near the town of Malone in northern New York, about 30 miles from the prison.

An autopsy showed Matt had been shot three times in the head, state police said Sunday.

Matt smelled of alcohol after a border patrol agent killed him Friday, the Buffalo News has reported.

A strong odor of alcohol emanated from his body after he was gunned down in the woods in northern New York, the paper said late Saturday, citing a law enforcement source. Matt, 49, was also sick, possibly after consuming spoiled food or bad water, the source told the paper.

The search for Sweat, 35, entered its 23rd day Sunday, hampered by heavy rain.

The indication Matt was ill came after searchers found soiled underwear at a burglarized cabin Wednesday, the News said.

A DNA test showed the underwear belonged to Matt, the paper said.

The paper also reported that based on his clothes and appearance, it looked like Matt had not bathed in a long time and had spent a great deal of time on the lam in the outdoors.

Police hunting Sweat believed the convict was fatigued and likely to make a mistake now that he is on his own.

Hundreds of law enforcement officers have converged on a wooded area 30 miles from the Clinton Correctional Facility with helicopters and search dogs, where Sweat is believed to be hiding.

Sweat and Matt cut their way out of the maximum-security prison in Dannemora June 6.

The search is focused on a 22-square mile area encompassing thick forests and heavy brush.

Franklin County Sheriff Kevin Mulverhill told Fox News Saturday that police are very motivated after Friday's events, while Sweat is likely fatigued, increasing the chances he will slip up.

"If he's in this perimeter, we're pushing him we're moving him around," Mulverhill said. He's tired, he's going to make a mistake."

Sweat also could have an even tougher time now without someone to take turns resting with and watch his back, Clinton County Sheriff David Favro said Saturday.

"Now it's a one-man show and it makes it more difficult for him," Favro said. "And I'm sure fatigue is setting in for him as well, knowing the guy he was with has already been shot."

Authorities said Matt was shot by a border patrol agent when he failed to comply with orders to show his hands. A 20-gauge shotgun was found on Matt, though he didn't fire it at officers, authorities said.

"They verbally challenged him, told him to put up his hands. And at that time, he was shot when he didn't comply," New York State Police Superintendent Joseph D'Amico said at a news conference late Friday.

The breakthrough came Friday shortly before 2 p.m., when a person towing a camper head a loud sound and thought a tire had blown out. Finding the tire intact, the driver drove another eight miles before discovering a bullet hole.

Authorities converged on the location where the sound was heard and discovered the smell of gunfire inside a cabin. D'Amico said there was also evidence someone had fled out the back door.

A noise -- perhaps a cough -- ultimately did Matt in. A border patrol team discovered Matt, who was shot after failing to heed a command to raise his hands.

"As we were doing the ground search in the area, there was movement detected by officers on the ground, what they believed to be coughs. So they knew that they were dealing with humans as opposed to wildlife," he said.

"We have a lot of people in the area. We have canines and we have a decent perimeter set up and we're searching for Sweat at this time," he said.

Mitch Johnson said one of his best friends checked on his hunting cabin in Malone Friday afternoon and called police after noticing the scent of grape flavored gin as soon as he stepped into his cabin and spotting the bottle that had gone untouched for years resting on a kitchen table.

Johnson said his friend, correction officer Bob Willett, told him he summoned police about an hour before Matt was fatally shot and then heard a flurry of gun blasts.

Sweat was serving a sentence of life without parole in the killing of a sheriff's deputy in Broome County in 2002. Matt was serving 25 years to life for the killing and dismembering of his former boss.

A civilian worker at the prison Joyce Mitchell has been charged with helping the killers flee by giving them hacksaw blades, chisels and other tools. She has pleaded not guilty.

On June 24, authorities charged Clinton correction officer Gene Palmer with promoting prison contraband, tampering with physical evidence and official misconduct. Officials said he gave the two prisoners the frozen hamburger meat Joyce Mitchell had used to hide the tools she smuggled to Sweat and Matt. Palmer's attorney said he had no knowledge that the meat contained hacksaw blades, a bit and a screwdriver.

The Associated Press and Fox News' Rick Leventhal contributed to this report.