Will any changes be made in wake of another mass shooting in Texas?

In the wake of Tuesday’s deadly school shooting in Uvalde, the state’s Republican leaders are already facing questions about whether enough was done after past mass shootings.

UVALDE, Texas - In the wake of Tuesday’s deadly school shooting in Uvalde, the state’s Republican leaders are already facing questions about whether enough was done after past mass shootings.

Texas has been here before with mass shootings.

A mass shooting leads to calls for change. Some changes happen, while some lose support, but then another tragedy happens.

Less than 24 hours after news broke of another mass shooting in Texas, tensions erupted as Republican Governor Greg Abbott held a news conference.

It was interrupted by his Democratic challenger Beto O’Rourke.

"The time to stop the next shooting is right now, and you’re doing nothing," O’Rourke stood up shouting, moments after Abbott finished speaking.

O’Rourke called Abbott’s response to the tragedy "predictable." He was escorted out while members of the crowd yelled at him, with Uvalde Mayor Don McLaughlin calling him a "sick son of a b----."

O’Rourke was quickly escorted out of the room.

Once outside, O’Rourke fumed.

"Why is this happening in this state, year after year, city after city," he said. "This is on all of us if we do not do something, and I am going to do something and I’m not alone."

Beto O'Rourke, the Democratic candidate for Texas governor, confronted lawmakers Wednesday during a news conference about the mass school shooting in Uvalde, Texas. 'You are doing nothing," O'Rourke accused. He was escorted out of the building.

Meanwhile, back inside, state lawmakers were already facing questions about whether more should have been done in the wake of past mass shootings in Texas.

In the wake of the Santa Fe High School shooting in 2018, in which a shooter killed 10, the governor convened roundtables, coming up with three dozen strategies, ranging from hardening school security, to allowing more armed teachers, to mental health, to firearm safety.

It resulted in legislative action, including funding for better security, which state leaders touted Wednesday.

"The consensus arose around those 17 bills that I did sign, that they hardened schools, they made schools safer, they addressed mental health," Gov. Abbott said.

"No matter what you do, there’s going to be someone to find another area that’s vulnerable, but the legislature did act. The governor did sign those bills, but we can and do need to do more in the area of mental health," Lt. Governor Dan Patrick said. 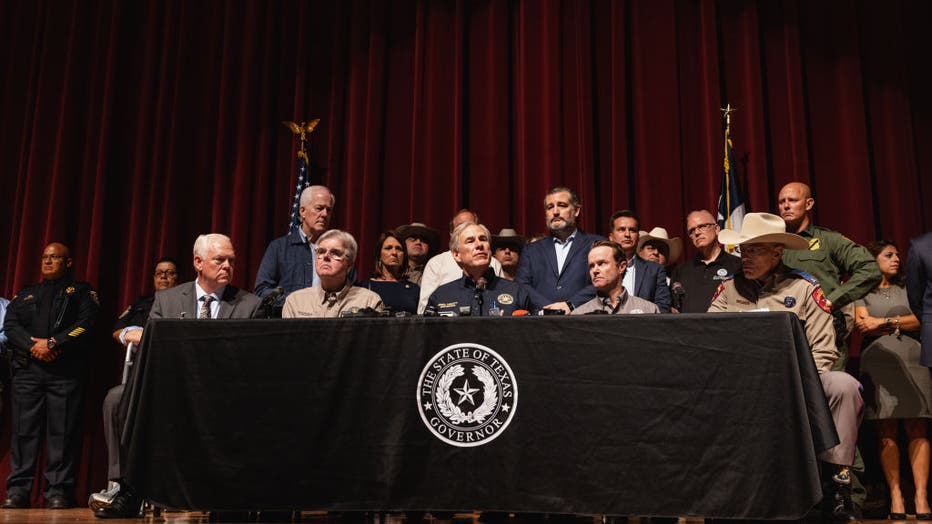 UVALDE, TX - MAY 25: Texas Gov. Greg Abbott speaks during a press conference at Uvalde High School on May 25, 2022 in Uvalde, Texas. On May 24, 21 people were killed, including 19 children, during a mass shooting at Robb Elementary School. The shoote

Gov. Abbott also brought up mental health, while acknowledging the shooter in Uvalde had no known mental health issues.

In the wake of Santa Fe, the governor did recommended the legislature consider a "red flag law" that could allow judges to temporarily remove guns from a potential dangerous person.

But months later, legislators did not push it forward.

"The political climate in this state for the foreseeable future just really will not permit any significant tightening of gun laws," Wilson said.

"So many Republicans are facing significant problems on their right. And we see that people who have long been known as having solidly conservative voting records still face right-wing populist insurgencies in the primary," he explained. "And showing any sort of willingness to compromise on gun control issues puts them very much at risk of a kind of right-wing primary challenge."

The Texas Legislature doesn't convene until early next year. That would be the first shot at legislative changes unless the governor acts through executive action.