NEWTOWN, Conn. - Sandy Hook Promise, a nonprofit aimed at preventing shootings and other harmful acts of violence in schools, released a chilling new PSA on Wednesday that depicts students in a cheery, familiar way showing off their new backpacks, jackets and binders — before taking a dark and sobering turn.

The 66-second ad, called “Back-to-School Essentials,” shows kids dealing with the threat of gun violence in their everyday lives and using their school gear to survive a shooting. One boy shows off his new backpack, while another flaunts his new headphones in a school library.

Then, a student is seen running down a hallway with gunshots heard in the background.

"These new sneakers are just what I needed for the new year," a boy says while running from a shooter.

“This jacket is a real must-have,” a girl says while attempting to lock a gymnasium door with her new article of clothing.

The clip ends with another girl hiding in a bathroom stall, crying, while texting “I love you mom” on her cell phone.

“I finally got my own phone to stay in touch with my mom,'' she says through tears.

Sandy Hook Promise said it produced the video to bring awareness to the "horrific new normal" and the stress and anxiety that students face on a daily basis at school.

The nonpofit was formed after the 2012 mass shooting at Sandy Hook Elementary School in Newtown, Connecticut in which 26 people were killed, including 20 children. Sandy Hook Promise is led by several family members of victims.

“Since the tragic shooting at Sandy Hook School almost seven years ago, reactive measures to gun violence such as active shooter drills and bulletproof backpacks have increased,” the nonprofit said in a release. “Many students fear that it’s only a matter of when, not if, a shooting will erupt on their school campus.” 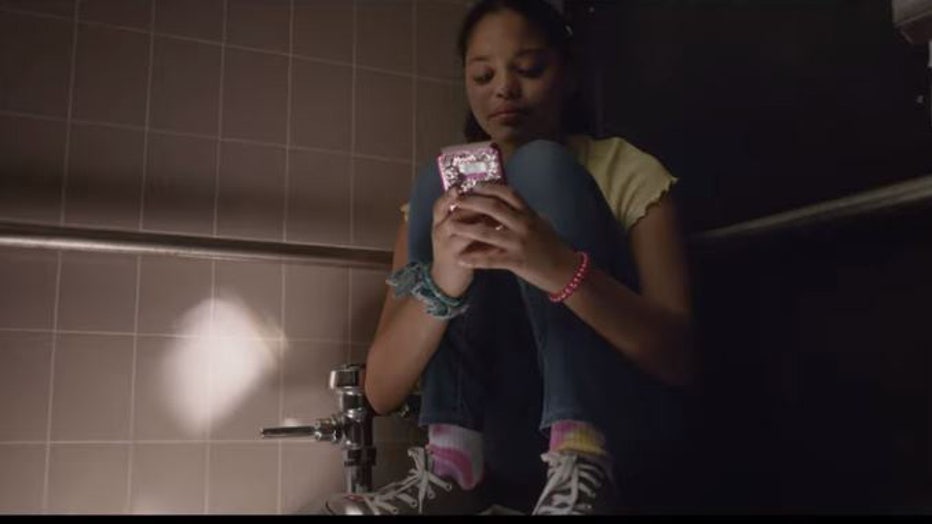 The nonprofit said accepting shootings as regular occurrences has become the "new normal" at schools and public spaces across the country.

RELATED: Nearly half of US adults fear being victim of mass shooting, poll finds

By releasing the new PSA, the organization said it also hopes to reinforce the “proven preventative solutions,” including programs to teach students and adults the warning signs that often precede a school shooting — along with steps to intervene and get help before violence occurs.

Approximately 80 percent of school shooters told someone of their plans prior to taking action, yet no interventions were made due to being overlooked, misunderstood or not being taken seriously, according to Sandy Hook Promise.

“By focusing on early identification, action and intervention it is possible to prevent tragedies,” Sandy Hook Promise said.