Amid new talks between Ukraine and Russia in Turkey, Russia's military will "fundamentally" cut back operations near the Ukraine capital of Kyiv and the northern city of Chernihiv as an attempt to "increase trust" during talks to end the fighting. A large portion of Russia's military has remained on the outskirts of Kyiv, unable to make further advances as Ukrainian forces continue to fight back.

KYIV, Ukraine - Russian forces bombarded areas around Kyiv and another city just hours after pledging to scale back operations in those zones to promote trust between the two sides, Ukrainian authorities said Wednesday.

The shelling — and intensified Russian attacks on other parts of the country — tempered optimism about any progress in the talks aimed at ending the punishing war.

Ukrainian President Volodymyr Zelenskyy said he stressed in a conversation with U.S. President Joe Biden that the war is at a "turning point" and renewed his longstanding request for more help to resist the Russian invasion.

"If we really are fighting for freedom and in defense of democracy together, then we have a right to demand help in this difficult turning point. Tanks, aircraft, artillery systems. Freedom should be armed no worse than tyranny," Zelenskyy said in his nightly video address to the nation, which he delivered standing in the dark outside the dimly lit presidential offices in Kyiv. He thanked the U.S. for an additional $500 million in aid that was announced Wednesday.

Meanwhile, talks between Ukraine and Russia were set to resume Friday by video, according to the head of the Ukrainian delegation, David Arakhamia. But there seemed to be little faith that a resolution would emerge anytime soon. The Russian military reneged on its pledge Tuesday to de-escalate near the capital and the northern city of Chernihiv in order to "increase mutual trust and create conditions for further negotiations."

The announcement was met with deep suspicion from Zelenskyy and the West. And soon after, Ukrainian officials reported that Russian shelling hit homes, stores, libraries and other civilian sites in and around Chernihiv and on the outskirts of Kyiv. Russian troops also stepped up their attacks on the Donbas region in the east and around the city of Izyum, which lies on a key route to the Donbas, after redeploying units from other areas, the Ukrainian side said. 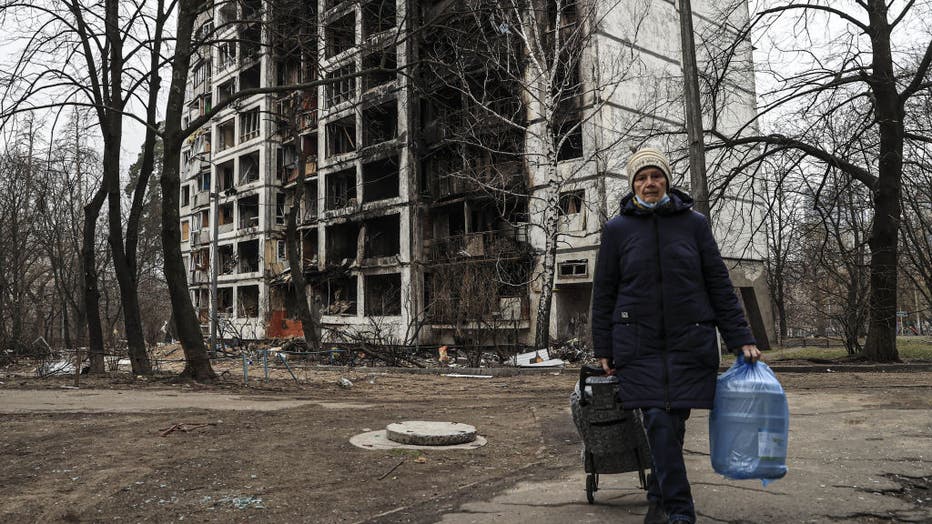 KYIV, UKRAINE - MARCH 30: A woman with belongings walks past a completely destroyed building after Russian shelling in Sviatoshinsky district of Kyiv, Ukraine on March 30, 2022. (Photo by Metin Aktas/Anadolu Agency via Getty Images)

Olexander Lomako, secretary of the Chernihiv city council, said the Russian announcement turned out to be "a complete lie."

"At night they didn’t decrease, but vice versa increased the intensity of military action," Lomako said.

Five weeks into the invasion that has left thousands dead on both sides, the number of Ukrainians fleeing the country topped a staggering 4 million, half of them children, according to the United Nations.

"I do not know if we can still believe the Russians," Nikolay Nazarov, a refugee from Ukraine, said as he pushed his father’s wheelchair at a border crossing into Poland. "I think more escalation will occur in eastern Ukraine. That is why we cannot go back to Kharkiv."

Zelenskyy said the continuing negotiations with Russia were only "words without specifics."

"We know that this is not a withdrawal but the consequences of being driven out," Zelenskyy said of Russia's pledge. "But we also are seeing that Russia is now concentrating its forces for new strikes on Donbas, and we are preparing for this."

Zelenskyy also said he had recalled Ukraine’s ambassadors to Georgia and Morocco, suggesting they had not done enough to persuade those countries to support Ukraine and punish Russia for the invasion.

"With all due respect, if there won’t be weapons, won’t be sanctions, won’t be restrictions for Russian business, then please look for other work," he said.

—U.S. intelligence officials have concluded that Russian President Vladimir Putin is being misinformed by his advisers about the poor performance of his military in Ukraine because they are too afraid to tell him the truth.

—The German government said it received assurances from Russia that European companies won’t have to pay for Russian gas in rubles. That prospect had raised fears that Russia could cut them off. Also, Poland announced steps to end all Russian oil imports by the end of the year.

— The U.N. is looking into allegations that some residents of the besieged and shattered southern city of Mariupol have been forcibly taken to areas controlled by Russian forces or to Russia itself.

At a round of talks held Tuesday in Istanbul, the faint outlines of a possible peace agreement seemed to emerge when the Ukrainian delegation offered a framework under which the country would declare itself neutral — dropping its bid to join NATO, as Moscow has long demanded — in return for security guarantees from a group of other nations.

But skepticism of statements from Russia by Zelenskyy and others seemed well-founded.

The U.S. said that over the last 24 hours, Russia had begun to reposition less than 20% of its troops that had been arrayed around Kyiv.

Pentagon press secretary John Kirby said that troops from there and some other zones have begun moving largely to the north, and some have gone into Belarus. Kirby said it appears Russia intends to resupply them and send them back into Ukraine, but it is not clear where.

The Ukrainian military said some Russian airborne units were recorded in neighboring Belarus and were believed to have withdrawn from Ukraine.

In northern Ukraine, Russian forces took no offensive actions Wednesday, focusing on reconnaissance and logistics, the general staff said in a statement. But Russia is expected to increase attacks soon on Ukrainian forces to protect its own troops as they are repositioned, it said.

The Russians also are expected to try to blockade Chernihiv.

President Joe Biden delivered remarks on Saturday to Ukrainian refugees in Warsaw Poland in the aftermath of Russia’s deadly invasion.

Top Russian military officials have said in recent days that their main goal now is the "liberation" of Donbas, the predominantly Russian-speaking industrial heartland where Moscow-backed separatists have been battling Ukrainian forces since 2014. Western officials say Moscow is reinforcing its troops in the Donbas.

Some analysts have suggested that the focus on the Donbas and the pledge to de-escalate may merely be an effort to put a positive spin on reality: Moscow's ground forces have been thwarted — and have taken heavy losses — in their bid to seize the capital and other cities.

Meanwhile, a missile destroyed part of an apartment block in the rebel-controlled city of Donetsk early Wednesday, and two people were reported killed. Separatists blamed Ukrainian forces for the attack.

"I was just sitting on the couch and — bang! — the window glass popped, the frames came off. I didn’t even understand what happened," said resident Anna Gorda.

The U.N. food aid agency said it is providing emergency assistance to 1 million people in Ukraine. It said the food includes 330,000 freshly baked loaves of bread for families in the heavily bombarded eastern city of Kharkiv.

"Children are suffering, and our city, and everything," Tetyana Parmynska, a 28-year-old from the Chernihiv region now at a refugee center in Poland, said as man played songs on a battered piano decorated with a peace emblem. "We have no strength anymore."

Karmanau reported from Lviv, Ukraine. Associated Press journalists around the world contributed to this report.