LOS ANGELES - Thirty years ago today, plumber George Holliday was asleep in his Lake View Terrace apartment when he was awakened by a commotion outside so loud it prompted him to grab his video camera and walk to his balcony to see what was amiss. 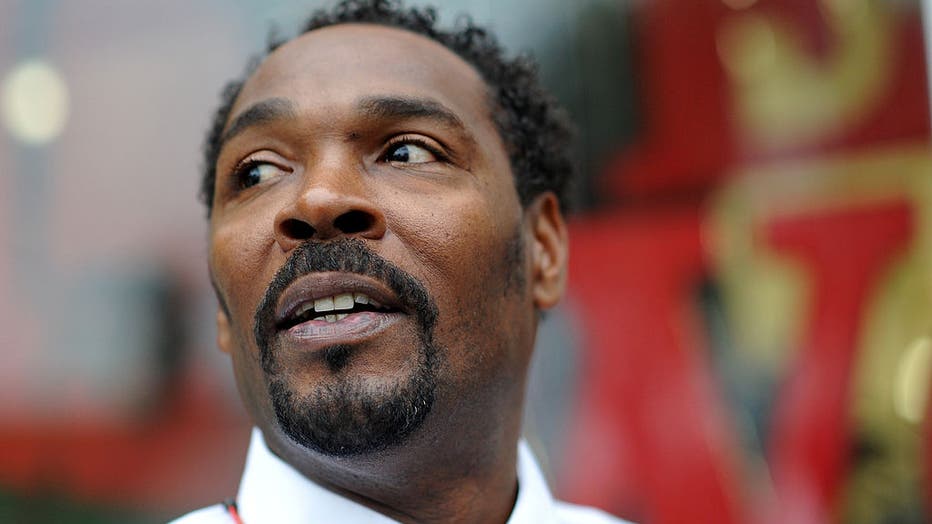 Rodney King speaks with fans before presenting his autobiographical book 'The Riot Within...My Journey from Rebellion to Redemption' at the Eso Won Book Store in Los Angeles, California, on April 30, 2012. The 1992 police beating of Rodney King spark

It was March 3, 1991, and through the lens of his camera, Holliday recorded four white Los Angeles police officers using batons, Tasers, feet and fists to beat a Black man later identified as Rodney King, whose name quickly became globally synonymous with police brutality.

King, an unemployed construction worker who had been drinking and was on probation for a robbery conviction, was instructed to pull over for speeding on a Los Angeles freeway. He eventually stopped his car in front of Holliday's apartment building, where Los Angeles police took charge of the traffic stop
that devolved into a violent confrontation as officers trying to subdue King pounded on him repeatedly, as others looked on.

Catching a wave on an overcast LA afternoon. That is the unlikely and personal memory I will always have of Rodney Glen King.

The video Holiday recorded was soon seen all over TV. It led to upheaval within the Los Angeles Police Department, sparking calls for the ouster of then-Chief Daryl Gates and prompting the appointment of the Christopher Commission to examine the inner workings of the LAPD and allegations of excessive force and institutional racism.

In an interview with FOX 11’s Christine Devine, Rodney King admitted to her "I shouldn't have been drinking and driving, but the rest was on them."

When the four officers involved in the King beating were acquitted a year later of excessive use of force by a jury in Ventura County, five days of rioting ensued in Los Angeles, resulting in 54 deaths, some 2,400 injuries, scores of destroyed buildings and other property damage, and more than 12,000 arrests. The acquitted police officers were later convicted of violating Rodney King's civil rights in a federal court trial.

King, a Sacramento native, died in Rialto on June 17, 2012, of what was described as an accidental drowning. He was 47. Before his death, he wrote the book "The Riot Within: My Journey from Rebellion to Redemption.''

The grainy footage Holliday shot that night made the then-31-year-old plumber a pioneer of citizen journalism. The Sony video camera used to record the episode went up for auction last July, with bidding starting at $225,000 but it was unclear if it was ever sold.

In April 2019, King's daughter, Lora King -- who was 7 years old when
her father was beaten -- began the "I Am A King'' scholarship to celebrate black fathers.

Lora King reflects on her dad

It wasn't easy to be the child of Rodney King. Looking back on her childhood, 36-year-old Lora King says it was hard to get an intimate moment with her very public father.

In 2016, she created an organization in his honor, The Rodney  King Foundation. She gives out scholarships to fathers so they can spend time with their children. It was something she started when Rodney was still alive

Lora King and other King family members will commemorate the 30th anniversary of his beating by feeding over 500 low-income families in Watts on
Wednesday. The event is sponsored by The Rodney King Foundation.

RELATED: Rodney King's daughter Lora reflects on his words 'can we all get along'

Holliday told The New York Times last year that he still works as a plumber, never profiting from the video, which was still in the possession of federal authorities.

He told the paper he had purchased the video camera about a month before the King beating, and he grabbed it instinctively when he and his wife were awakened by the police ruckus outside his window.

"You know how it is when you have a new piece of technology,'' he told the paper. "You film anything and everything.''