The true cost of a business during COVID-19 pandemic

Owning a business as the coronavirus pandemic continues on can come at a price, how much is it worth to keep it alive?

LOS ANGELES - Low pay, rude customers, long hours, no benefits — just a few of the reasons why restaurant and hospitality workers have been quitting their positions at record rates during the COVID-19 pandemic.

Over the last 10 years, there has been a steady incline in quit rates within the food service and hospitality industries, but within the last year alone, the rates have noticeably surged, according to the U.S. Bureau of Labor Statistics. 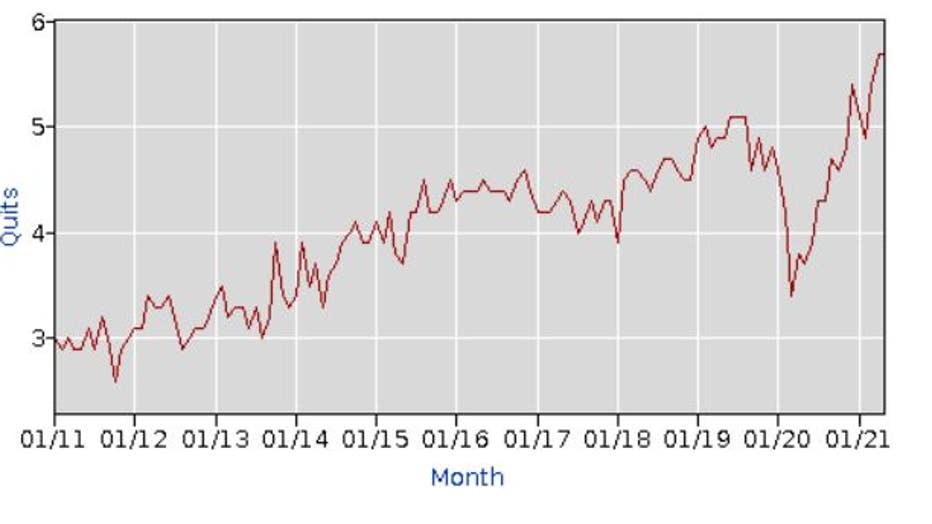 Quit rate in food services industry over past decade (Credit: US Bureau of Labor Statistics)

According to data released by the bureau, workers have been leaving their jobs at restaurants and hotels at the highest rate in decades. In fact, around 5% of the workforce in leisure, hospitality and food services have called it quits every month so far in 2021.

And according to a new survey by One Fair Wage, even more workers are considering leaving.

In May 2021, 535 of the remaining restaurant workers surveyed reported that they considered leaving the industry. Meanwhile, 76% who said they were leaving indicated that their decision was due to low wages and tips, and 78% of individuals reported that they would only stay if their job provided a full, stable and livable wage with tips on top.

Yet, this year is shaping up to be one of higher pay years for employees in some industries, including restaurants.

In the past three months, employees have seen some of the fastest wage growth since the early 1980s, indicated by June’s jobs report, which showed that the U.S. economy added 850,000 jobs in the month. Meanwhile, average pay in the restaurant industry is now above $15 per hour for the first time ever.

But the data comes as employers clamor to find workers and face difficulty in filling open positions.

Employers posted a record 9.2 million job openings in May, advertising vacancies faster than applicants can fill them.

In response, half of the states in the U.S. have cut or will soon end federally-funded unemployment insurance benefits prematurely in an apparent bid to force workers to return to lower-wage jobs.

Still, not everyone is 100% comfortable with shifting back to pre-pandemic times, especially as the highly contagious delta variant continues to fuel COVID-19 infection surges.

Citing new information about the variant’s ability to spread, the U.S. Centers for Disease Control and Prevention changed course Tuesday on masking guidelines, recommending that even vaccinated people return to wearing masks indoors in parts of U.S. where infection rates are high.

To date, nearly nine in 10 employees, about 89%, are concerned about going back to the office, and about 35% are worried about contracting the virus, according to Glassdoor's return-to-office survey released Thursday.