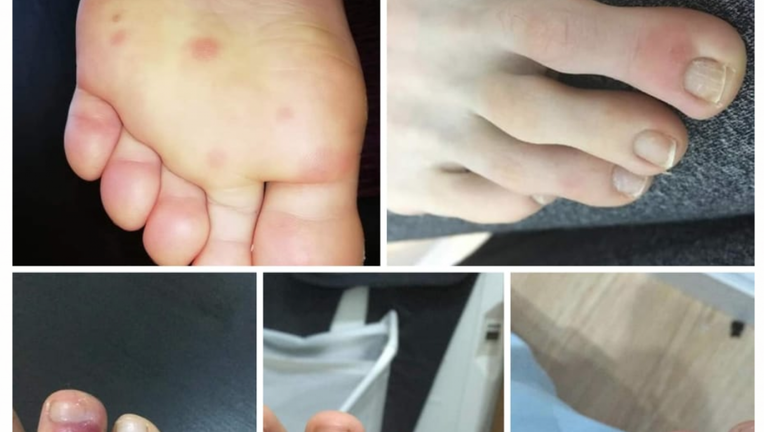 COVID-19, the disease that has caused the coronavirus pandemic, is a respiratory illness that has symptoms that can include fatigue, a persistent cough and fevers. However, researchers in Spain believe they have discovered another symptom —lesions on feet.

According to a statement from the Spanish General Council of Official Podiatrist Colleges, the lesions are described as similar to those seen with chickenpox and can largely be seen on the feet of children and adolescents. They have also been spotted on some adults.

"It is a curious finding that began yesterday to spread in the healthcare field, among dermatologists and podiatrists, fundamentally: the same symptoms are increasingly being detected in patients with COVID -19, especially children and adolescents, although some cases have also been detected in adults," the statement reads. "These are purple-colored lesions (very similar to those of chickenpox, measles or chilblains) that usually appear around the toes and that usually heal without leaving marks on the skin."

The lesions have been found in Italy, France and Spain, the researchers added.

Spain is the second-most affected country in the world, with nearly 185,000 cases. Italy and France have the third and fourth-most confirmed cases at 168,941 and 147,101 cases, respectively.

The statement added a link to a research paper from the International Federation of Podiatrists, specifically citing a case of a 13-year-old boy with lesions and no other symptoms of the virus.

As such, it's possible the lesions could be a warning sign of the virus, with the council urging its members to be "very vigilant" in detecting what could be "a sign of COVID-19 detection that can help to avoid the spread."

As of Friday morning, more than 2.1 million coronavirus cases have been diagnosed worldwide, more than 671,000 of which are in the U.S., the most impacted country on the planet.