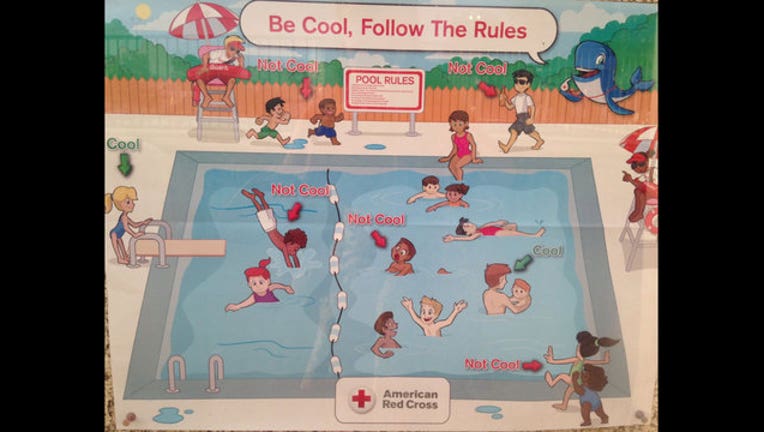 A poster about pool safety that was up outside a Colorado swimming pool is being called racist.

NEW YORK (FOX 5 NY) - A poster about pool safety that was up outside a Colorado swimming pool is being called racist.

A man shared a photo he apparently took of the poster at the Salida community pool. On Twitter, John Sawyer asked the American Red Cross about the "super racist" poster.

"Hey Red Cross. Send a new pool poster to @SalidaRec bc the current one they have with your name on it is super racist."

The Red Cross responded to Sawyer via Twitter saying "Thank you for bringing this to our attention. We’re removing this from our site immediately & are creating new materials."

The poster shows four arrows pointing at black children who are "not cool" for not following the rules while the majority of the white children depicted in the poster appear to be in compliance.

The organization that helps people in distress around the world issued an apology reported by a local TV station.

"We deeply apologize for any misunderstanding, as it was absolutely not our intent to offend anyone," said the ARC.

Not everyone reacting on social media finds the poster offensive.

One Twitter user said: "@datnofact "Honestly, I'm baffled. Are people seeing racism where none at all exists?"