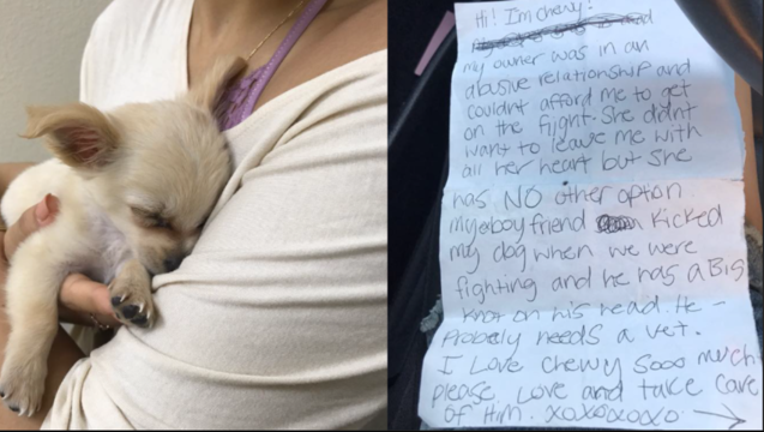 LAS VEGAS, NV (FOX 11) - A puppy that was abandoned in an airport bathroom along with a note has received tons of offers for adoption.

Chewy the Chihuahua was found in a bathroom at the McCarran Airport in Las Vegas along with a note from his former owner. The note said Chewy's former owner was in an abusive relationship and couldn't afford to bring the pup with her on her flight even though she really didn't want to leave the puppy behind.

The note went on to say, "My ex-boyfriend kicked my dog when we were fighting and he has a big knot on his head. He probably needs a vet. I love Chewy sooo much - please love and take care of him."

Chewy eventually was handed over to Connie and Millie's Dog Rescue in Las Vegas.

The rescue group posted a photo on Facebook of the dog along with the handwritten note from his old owner and Chewy's story quickly went viral.

The rescue group wrote in the post, "Please share in hopes that his mom sees this, that she was brave to leave and that he will have a great life."

An update on the group's Facebook page says there was 'tremendous interest' in Chewy and the group is compiling all of the interest forms and will go through them all before finding Chewy his new forever home.