Activists were out in Dallas and Fort Worth Saturday voicing their opinions on the Supreme Court's decision to overturn Roe v. Wade. FOX 4's Peyton Yager has reactions from those who attended the rallies.

DALLAS - Abortion rights activists were out in Dallas and Fort Worth voicing their opinions on the Supreme Court’s decision. The rallies started Saturday morning across the metroplex.

A couple hundred people gathered in Dallas were joined by hundreds more in Fort Worth to protest the reversal of Roe v. Wade, the landmark 1973 case that had given women the right to have abortions.

Those in the crowd said they are feeling scared, disappointed, and angry about Friday’s decision. But they want to take their anger to action.

"I am really disappointed and not proud to be an American anymore," said Lialah Putman – Harper. 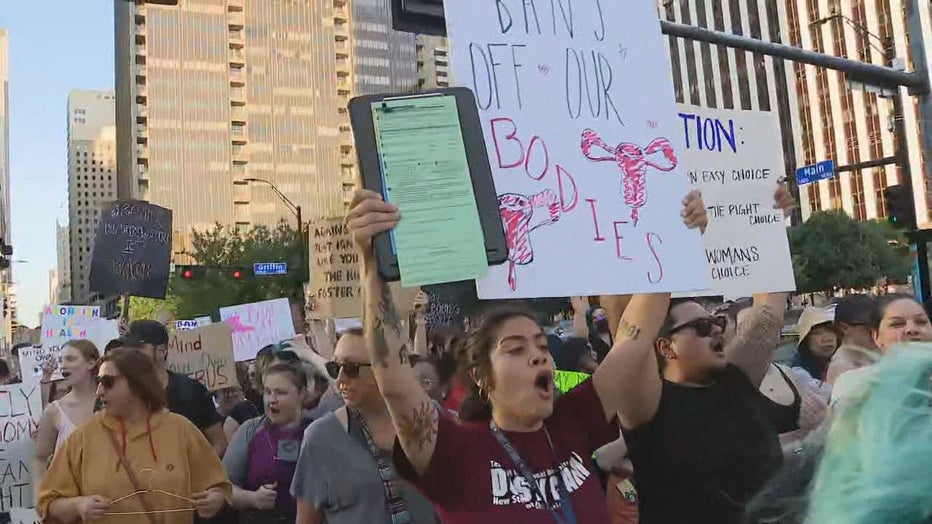 "Let’s change this and restore the rights," said Allison Liu, who is in school for social work. "We’ve learned about all the people who fought for our rights, so we did have rights. And to have it all taken away after all that hardworking is heartbreaking."

Activists and politicians took the stage during the march in Downtown Dallas.

"If we can get those votes up in Dallas County," State Sen. Royce West said.

"Just pure shock that it actually did happen," she said. "Not only are we fighting for us today. We are fighting for her as well."

Immediately after the decision Friday, Texas abortion clinics like Whole Woman’s Health in Fort Worth halted all abortion services. A sign was posted on the clinic door apologizing for the devastating news.

Abortions in Texas have stopped after AG Ken Paxton said pre-Roe bans could be in effect, clinics say

"Yesterday was actually a really good day," said Mary Castle, a senior policy advisor for Texas Values, the state’s largest anti-abortion group. "I know there will be some legalities that they are trying to figure out, but we are happy. They are complying with where we are moving towards which is an abortion-free America."

The demonstrations in North Texas Saturday all remained peaceful. More are planned for next week.