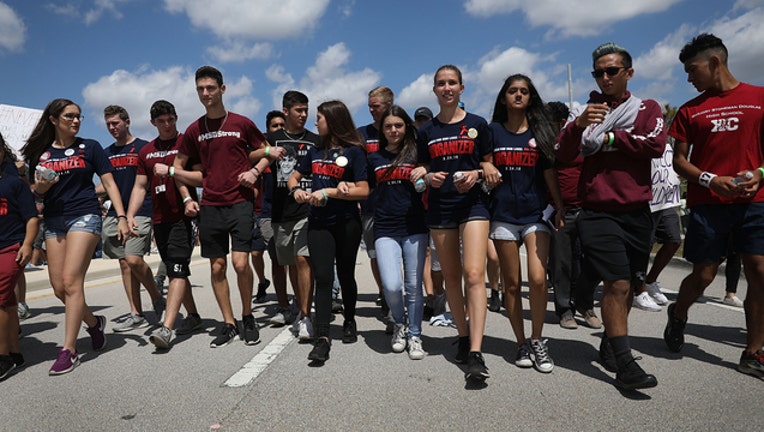 Marjory Stoneman Douglas High School students participate in the March For Our Lives event at Pine Trails Park as they walk to the high school on March 24, 2018 in Parkland, Florida. (Photo by Joe Raedle/Getty Images)

PARKLAND, Fla. - As hundreds of students from Marjory Stoneman Douglas High School traveled to the nation’s capital for the huge March For Our Lives event, more than 20,000 demonstrators held a rally and march of their own in Parkland, Florida.

The protesters gathered at at Pine Trails Park for Saturday’s rally before walking about two miles to the high school, the site of February’s massacre where 17 students and staff members were killed.

Stoneman Douglas students wore maroon shirts, the school’s color, while chanting "Enough is enough." Shirts were being passed out to protesters at a shuttle bus stop that said, "Let's finally break their hold!" and "Keep our kids safe, common sense gun laws" while some had signs that read, "Why do your guns matter more than our lives?" and "Our ballots will stop bullets."

As they reached Stoneman Douglas, the protesters passed by the school in silence to honor the victims of the shooting.

Some speakers called for bans on the AR-15 semi-automatic rifle that authorities say suspect Nikolas Cruz used in the massacre. Others called for more funding to install bulletproof doors and windows in classrooms. Some of those killed and wounded were shot through doors.

Stoneman Douglas High School is about 40 miles away from President Donald Trump's  golf club in Mar-A-Lago, which is where he staying this weekend as the March for Our Lives demonstrations across the country are taking place.

Thousands of protesters are expected to gather at Mar-A-Lago for a sister March For Our Lives rally, according to the Palm Beach Post.

Information from the Associated Press used in this report.