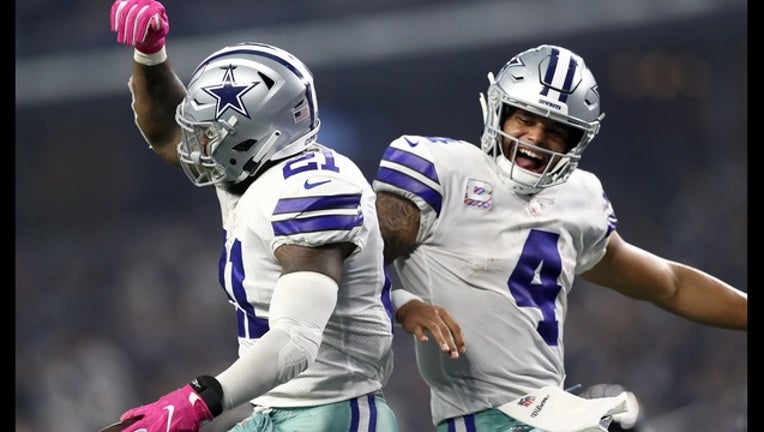 Ezekiel Elliott #21 and Dak Prescott #4 of the Dallas Cowboys celebrate the fourth quarter touchdown against the Jacksonville Jaguars at AT&T Stadium on October 14, 2018 in Arlington, Texas. (Photo by Ronald Martinez/Getty Images)

So did his Dallas teammates with the UFC star watching after some pregame pumping up.

Prescott threw two touchdown passes to Cole Beasley for a big halftime lead and rushed for a career-high 82 yards with another score in the Cowboys' 40-7 victory over the Jacksonville Jaguars on Sunday.

"It's definitely the best we've played from executing on offense and taking advantage of when the defense is giving us turnovers and good field position," Prescott said. "We were just feeding off each other. We felt it early. I don't know if it was Conor McGregor or whatever it was."

McGregor mingled before the game with the Cowboys , offering some fist-pumping encouragement before they rolled to a 24-0 halftime lead. Beasley recorded his first two touchdowns of the season for the NFL's 30th-ranked passing offense that was facing the league's No. 1 pass defense.

Prescott had 151 of his 183 yards passing in the first half because Dallas (3-3) didn't need to throw while coasting during a second-half blowout.

The 2016 NFL Offensive Rookie of the Year already had his personal best in rushing for a game when he spun out of a sack for the longest run of his career, a 28-yarder. He scored Dallas' first touchdown on a 17-yard run while almost doubling his previous high of 45 yards, in Week 2.

Trailing by at least 20 at halftime for the second straight week, the Jaguars (3-3) had to abandon their preferred running attack again. They also were without Leonard Fournette for the fourth time with a hamstring injury, and have a banged-up offensive line on its third left tackle.

Blake Bortles, who established a career high in yards passing in consecutive weeks and had a chance to become the fifth NFL quarterback with three straight games of at least 375 yards, was 15 of 26 for 149 yards with a touchdown and an interception.

"Tough to describe, just pretty much a waste of a day, and a trip," Bortles said. "Not by any means what we expected to do, were planning on doing. We've got to find a way to fix it, and we will."

The Cowboys won their first three games of the season at 9-year-old AT&T Stadium for the first time. Most of their offensive struggles have been in the three road losses.

No such difficulties this time, even when Prescott lost control of the ball twice and basically dribbled to himself on two of his career-high 11 runs. He also completed a first-down pass to Baylor power forward-turned tight end Rico Gathers, making it quite the basketball day as well.

Beasley had his second career 100-yard receiving game with 101 yards on nine catches. The scoring plays were from 17 and 9 yards , with the diminutive receiver showing plenty of emotion after each big catch.

"Maybe it was a little social media action that got me pumped, and also game plan," Beasley said. "Knowing I had a lot of opportunities, I was ready to go."

The Dallas defense, a top 10 unit overshadowed coming into the game, lost its shutout on Bortles' 34-yard pass to Dede Westbrook midway through the third quarter.

But the Cowboys answered with their second interception of the season, by Jeff Heath as part of triple coverage , and Jourdan Lewis' recovery just barely inbounds of receiver Keelan Cole's fumble after a catch. The Jaguars had season lows with 204 total yards and 65 on the ground.

The centerpiece of the Dallas offense, NFL rushing leader Ezekiel Elliott, was something of an afterthought with the prolific passing in the first half. But he finally passed Prescott's rushing total for good on a 15-yard scoring run for a 37-7 lead and finished with 106 yards on 24 carries.

It was the first meeting for Elliott and outspoken Jaguars cornerback Jalen Ramsey, who was taken one spot behind the Cowboys star at No. 5 in the 2016 draft. Both teams are obviously happy with the pick.

The Jaguars rode their defense to a spot in the AFC championship game last season, and Elliott has been arguably the league's most productive back. The 2016 rushing leader as a rookie, Elliott was suspended for six games last season over domestic violence allegations.

Ramsey almost had an interception on the sideline at the goal line with the Jaguars down 24-7 late in the third quarter, but couldn't get his second foot inbounds.

Dallas' Brett Maher had four field goals for the second time in three games, including a career long of 55 yards. ... Randy Gregory had his first sack since his return from substance-abuse suspensions that sidelined the Cowboys defensive end for 30 of 32 games the previous two seasons.

Jaguars: DE Calais Campbell left in the first half with a rib injury. ... TE Niles Paul didn't return because of a knee injury.

Cowboys: WR Tavon Austin left in the second half with a groin injury and didn't return.

Jaguars: Home against Houston next Sunday.

Cowboys: At Washington next Sunday.