Dallas ISD is deep cleaning its buses as part of a stepped up effort to combat the spread of the coronavirus.

DALLAS - Dallas ISD is deep cleaning its buses as part of a stepped up effort to combat the spread of the coronavirus.

Meanwhile, leaders from school districts, cities, counties, and health officials in Dallas and Tarrant counties got together to talk about working together to combat the virus.

There was a summit of sorts at city hall Wednesday to bring a bunch of different stakeholders to the table so everyone could game plan.

They discussed everything from school closures, to how provide basic city services if a large chunk of the work force is home sick.

The hope is that with planning and preventative work underway now, it helps mitigate major problems.

When the school buses returned from ferrying home Dallas ISD students Wednesday, a project got underway that the district hopes will keep those students safe.

“We will be doing our high level disinfection on the buses,” said Yassiel Ibarra, with GermBlast.

The district is using a vendor, GermBlast, to do a deep clean on all of its buses this week.

DISD has used the company for cleaning before.

But this time, it’s being done to prevent the spread of the new coronavirus.

“We wanted to make sure that we were taking every precautionary measure possible,” said Jaime Sandoval, interim executive director of student transportation services for DISD. “We want to make sure we are protecting our kids and our drivers.” 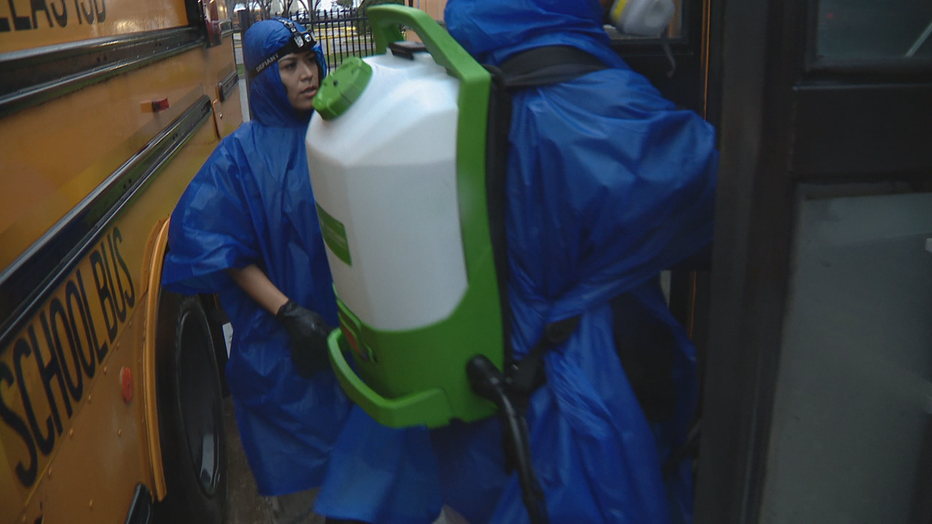 While precautionary measures like this were underway, at Dallas City Hall, top officials from schools, hospitals, and city agencies were meeting to discuss plans for a potential outbreak.

“I believe it's not if, it's when. We all believe it's a matter of when,” said Rocky Vaz, director of Emergency Management for the city of Dallas.

Officials game planned scenarios in which schools could close.

“We're going to handle that on a case-by-case basis. If we're told that a school or two need to be shut down, then we'll shut a school or two down. Not necessarily the whole district, unless we get directives from Dallas County Healht or the CDC that this is bigger and you need to do more,” said DISD Superintendent Dr. Michael Hinojosa.

Dallas officials said there is a plan in case the illness keeps anywhere between 10 to 50 percent of the city's workforce from coming in.

That includes police and fire.

“We're looking forward and planning for any contingencies that may happen, from losing anywhere from 10 percent, to 20, to 40, to all the way to 50 percent of the workforce,” Vaz said.

Dallas County will now be able to test for its own cases and provide tests for nearby counties.

Tarrant County officials expect they will be ready for testing as soon as next week.

There is still not a confirmed case in North Texas.

“If there is anything confirmed, then we're there to help anybody out,” Ibarra, with GermBlast, said.

Superintendent Hinojosa brought up the fact that there are schools that have trips and sports events across the state.

But he said the district is going to continue business as usual until there is something out there that tells the district not to.