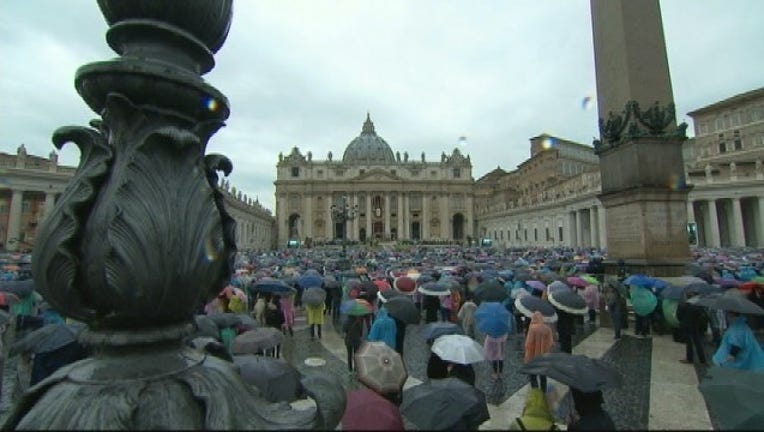 VATICAN CITY (AP) -- In an Easter peace wish, Pope Francis on Sunday praised the framework nuclear agreement with Iran as an opportunity to make the world safer, while expressing deep worry about bloodshed in Libya, Yemen, Syria, Iraq, Nigeria and elsewhere in Africa.

Cautious hope ran through Francis' `'Urbi et Orbi" Easter message, a kind of papal commentary on the state of the world's affairs, which he delivered from the central balcony of St. Peter's Square.

He had just celebrated Mass in rain-whipped St. Peter's Square for tens of thousands of people.

Francis made his first public comments about the recent framework for an accord, reached in Lausanne, Switzerland, and aimed at ensuring Iran doesn't develop a nuclear weapon.

`'In hope we entrust to the merciful Lord the framework recently agreed to in Lausanne, that it may be a definitive step toward a more secure and fraternal world."

Decrying the plentitude of weapons in the world in general, Francis said: `'And we ask for peace for this world subjected to arms dealers, who earn their living with the blood of men and women."

He denounced "absurd bloodshed and all barbarous acts of violence" in Libya, convulsed by fighting fueled by tribal and militia rivalries. He hoped `'a common desire for peace" would prevail in Yemen, wracked by civil warfare.

Francis prayed that the `'roar of arms may cease" in Syria and Iraq, and that peace would come in Africa for Nigeria, South Sudan, Sudan and Congo.

He recalled the young people, many of them targeted because they were Christians, killed last week in a Kenyan university, and lamented kidnappings, by Islamic extremists, that have plagued parts of Africa, including Nigeria.

On Good Friday, Francis chastised the international community for what he called the complicit silence about the killing of Christians. On Easter he prayed that God would alleviate `'the suffering of so many of our brothers persecuted because of his name."

During Mass, Francis was shielded from pelting rain by a canopy erected outside St. Peter's Basilica, while prelates carried umbrellas in the yellow and white colors of the Vatican.

The downpour petered out to a drizzle, and by the ceremony, the rain had stopped. Francis, wearing a white overcoat, was driven through the square in the open-sided popemobile so he could wave to the faithful.