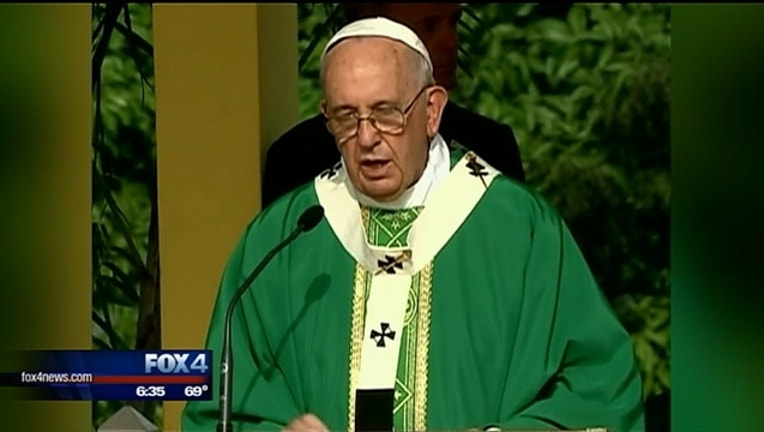 HOLGUIN, Cuba (AP) — Pope Francis marked a personal anniversary Monday — the day he decided as a teenager to become a priest — by traveling to the Cuban city of Holguin, emphasizing his papacy's focus on preaching the faith in places far from the international spotlight.

Francis celebrated Mass in the main plaza of Holguin, becoming the first pope to visit Cuba's third-largest city. Later, he was to head to Santiago on Cuba's eastern end before flying to Washington on Tuesday for the U.S. leg of his two-nation trip to the former Cold War foes.

Monday is an important anniversary for the pope: On Sept. 21, 1953, when Jorge Mario Bergoglio was 17, he went to confession at his parish church in the Flores neighborhood of Buenos Aires. During his confession, he later wrote, he "realized God was waiting for me" and decided to enter the priesthood.

Bergoglio wouldn't enter the seminary for several more years, but Sept. 21 — the feast of St. Matthew — has remained a crucial reference point for the pope. His motto — Miserando atque eligendo (Having had mercy, he called him) — is inspired by the feast day.

Singing children and a small crowd waving Cuban and Vatican flags greeted Francis on arrival, some crying out, "Francis! Holguin is with you!" from the tarmac as the pope emerged from an Alitalia plane.

Holguin's Plaza of the Revolution was packed with thousands of people, many dressed in white to protect themselves from the sun. They waved flags as the pope traveled in his popemobile through the crowd.

Security agents didn't appear to be letting members of the crowd get close to him. On Sunday, an apparent dissident hung on to the popemobile and appeared to be appealing to the pope before the man was dragged away.

The head of the opposition group Ladies in White said 22 of 24 members who wanted to attend Francis' Mass on Sunday were prevented from going by Cuban security agents. And two well-known Cuban dissidents said agents detained them after the Vatican invited them to the pope's vespers service at Havana's cathedral.

The Vatican spokesman, the Rev. Federico Lombardi, confirmed that some dissidents were invited to events to receive a greeting from the pope but that he didn't know why the greeting didn't occur.

Asked if the Holy See would lodge an official protest, Lombardi demurred. He stressed that it was a "passing greeting," not an official meeting, and that it was set up out of a "desire to show an attention for everyone, including dissidents."

In Havana, the pope met Fidel Castro over the weekend in a 40-minute session at the former president's home that the Vatican described as "informal and familial," with an exchange of books and discussion about issues facing humanity. The topics included Francis' recent encyclical on the environment and the global economic system.

Video of the encounter broadcast on Cuban state media showed the 89-year-old Castro chatting animatedly with Francis, the pope in his white vestments while Castro wore a white button-down shirt and Adidas sweat top.

The meeting brought together the leader who shaped Cuba and inspired millions of Latin Americans over the last half of the 20th century and the region's first pope, whom many Cubans credit with opening a path to the future by mediating the warming of diplomatic relations between their country and the United States.

Francis then met for an hour with Fidel's 84-year-old brother Raul, a declared atheist who, perhaps jokingly, has said he likes the pope so much he is thinking of returning to his Catholic roots.

In his homily, delivered under the gaze of a metal portrait of revolutionary fighter Che Guevara, Francis urged Cubans to care for one another out of a sense of service, not ideology. It was a subtle poke at the communist system.

"Whoever wishes to be great must serve others, not be served by others," he said. "Service is never ideological, for we do not serve ideas, we serve people."