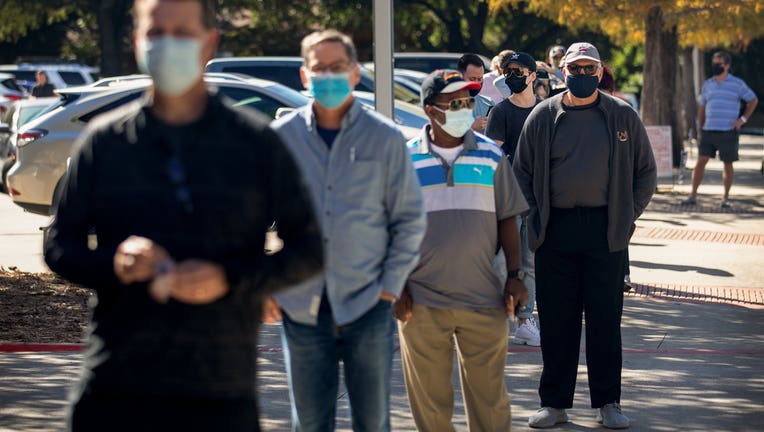 Voters wait in line to at Audelia Road Branch Library on the first day of early voting in Dallas. (Montinique Monroe for The Texas Tribune)

Joe Biden’s campaign will be running television ads in El Paso, San Antonio and Dallas-Fort Worth heading into Election Day. The Democratic nominee for vice president, Kamala Harris, is planning a visit to Texas during the homestretch of the campaign. And polls show the Biden-Harris ticket within striking distance — and, in some surveys, ahead — in the traditionally Republican state.

Texas may still not be among the top priorities of either party’s presidential nominee in 2020 — and President Donald Trump might still be the favorite here. But the activity in the final days of this year’s presidential election suggests that, for the first time in decades, Texas is not a foregone conclusion. Democrats are at least in the running here in races for the presidency, U.S. Senate and numerous seats down ballot.

Trump won Texas by 9 percentage points in 2016 — and that was the smallest margin of victory for a Republican since 1996. But few, if any, polls are showing that kind of margin right now.

A Biden win in Texas would be a political earthquake in American politics. The last Democrat to win the state’s Electoral College votes was Jimmy Carter in 1976. It’s unlikely Texas would be the tipping point that handed Biden the White House — most agree a Texas win would be accompanied by a Biden landslide across the country. But it would end the decadeslong Republican dominance in the nation’s most populous red state.

In another sign of the competitiveness here, billionaire Michael Bloomberg on Tuesday indicated he would use his super PAC, Independence USA, to fund $15 million worth of statewide ads in both Texas and Ohio. A spokesman for Bloomberg, the former mayor of New York, said the decision came after his team polled multiple states and came away convinced that Texas and Ohio were prime pickup opportunities.

Trump’s campaign and his allies insist that Republicans’ grip on the state hasn’t loosened. Over the weekend, campaign spokesperson Tim Murtaugh and former Secretary of Energy Rick Perry, also the former governor of Texas, told supporters on a press call that Trump would not visit Texas before Election Day.

“The president is going to win Texas,” Murtaugh told a reporter in response to a question about Trump’s plans for the state. “The president will be focusing his time and travel and energy on the states that will decide the election.”

Biden himself hasn’t made a formal visit to the state. But the number of people going to the polls has been a major source of optimism for Democrats.

With four days of early voting still ahead, the percentage of Texas registered voters who had already cast ballots on Monday was poised to surpass the entire share of people who voted early in 2016. Given that Texans have six extra days of early voting this year and because some voters’ habits might have shifted due to the pandemic, it’s hard to conclude what that will mean for overall turnout. But Democrats were optimistic, especially since the raw number of votes cast was shattering records in the state’s fast-growing suburban areas, which have traditionally voted Republican but which trended more blue in the 2018 midterm elections.

“Turnout is completely unprecedented, and you better bet that the folks who are turning out are not turning out to keep the status quo,” Hidalgo said.

The shifting politics of the suburbs — and Trump’s declining popularity there — has also threatened Republicans’ hold on their state House majority and several congressional seats long held by GOP members.

U.S. Sen. John Cornyn, R-Texas, finds himself at the center of a reelection race that has heated up considerably in recent weeks. His Democratic opponent, MJ Hegar, has handily outpaced him in fundraising since the summer, and national outside groups are making a late, eight-figure financial play to defeat him.

While polls continue to give Cornyn an advantage over Hegar, the senator is prepared for a much closer contest than his last reelection bid, which he won by 27 points.

“I think it’ll be single digits” this time, Cornyn said in a Dallas TV interview Sunday.

Even beyond the presidential and U.S. Senate races, some statewide races are drawing increasing attention. Chrysta Castañeda, the Democratic nominee for railroad commissioner, announced Monday that she had received $2.6 million in donations from Bloomberg, a remarkable amount for an office that rarely attracts political interest from outside Texas. The all-GOP Railroad Commission regulates Texas’ oil and gas industry.

And even if Trump wins Texas, a margin smaller than his 2016 one could cause a significant ripple down-ballot.

The Democratic Congressional Campaign Committee is targeting 10 GOP-held seats across the state, while its Republican counterpart is working to win back the two seats it lost in 2018, those currently held by Democratic Reps. Colin Allred of Dallas and Lizzie Pannill Fletcher of Houston. With a week left, though, the most hotly contested races are four where the GOP is on defense: the races for the 21st District, where Rep. Chip Roy, R-Austin, is running for reelection; the 22nd District, where Rep. Pete Olson, R-Sugar Land, is retiring; the 23rd District, where Rep. Will Hurd, R-Helotes, is also vacating the seat; and the 24th District, where another retirement is happening with Rep. Kenny Marchant, R-Coppell.

But even beyond that core battlefield, some seats once considered stretches for Democrats appear increasingly competitive. Case in point: the 3rd Congressional District, currently held by Rep. Van Taylor, R-Plano. Trump won the suburban Dallas district by 14 points in 2016, but U.S. Sen. Ted Cruz, R-Texas, carried it by only 3 in 2018 and the latest Democratic polling has Biden winning it by double digits, with Taylor in a tight race against Democratic challenger Lulu Seikaly.

In a sign of how much of a liability Democrats believe Trump is in the district these days, Seikaly is airing TV ads that explicitly tie the incumbent to the president, particularly on his coronavirus response. Seikaly’s latest TV ad shows a man inside his garage reacting with disbelief at Trump’s suggestion earlier this year that people may inject themselves with disinfectants to fight the virus.

“For us, at least, Van Taylor has been such a proponent of Donald Trump … so for these voters who are abandoning the president, that is what we’ve been doing with our ads, our mail, our digital,” Seikaly said in an interview. “We need them to know Van Taylor is just a Donald Trumper.”

Taylor, for his part, is airing commercials that avoid any mention of Trump, opening with an attack on “Liberal Lulu Seikaly” before touting a Dallas Morning News story that labeled him “Mr. Bipartisan.”

The biggest down-ballot prize for Democrats, though, is the Texas House. Democrats are nine seats away from the majority after picking up 12 seats two years ago — and Republicans acknowledge that even if Trump carries the state, even if Cornyn wins reelection, the House is still very much in play.

Austin Chambers, president of the Republican State Leadership Committee, said in an interview Monday that the Texas House battle will be a “dogfight that’s gonna be close all the way until the end.” He expressed confidence that Republicans will ultimately prevail but said the RSLC has spent about $9 million to defend the majority in Texas “and we don’t plan to slow down any time soon.”

Asked for the biggest challenge the RSLC faces in the homestretch, Chambers pointed to “all of the out-of-state Democratic money flooding in.”

Democrats are certainly trying their best. On Monday, the Texas House Democratic Committee announced its latest fundraising haul: $4.5 million over roughly the past month, or more than eight times what it raised during the same period last election cycle.

Disclosure: The University of Texas at Austin, The New York Times and the University of Houston's Hobby School of Public Affairs have been financial supporters of The Texas Tribune, a nonprofit, nonpartisan news organization that is funded in part by donations from members, foundations and corporate sponsors. Financial supporters play no role in the Tribune's journalism. Find a complete list of them here.

"Polls, late campaign activity suggest Republican dominance in Texas could be at risk" was first published at https://www.texastribune.org/2020/10/27/texas-election-battleground-2020/ by The Texas Tribune. The Texas Tribune is proud to celebrate 10 years of exceptional journalism for an exceptional state.