President Joe Biden said that he plans to run for reelection in 2024 when asked at his first news conference since becoming president. Biden took questions for just over an hour on the border crisis, foreign affairs, COVID-19 relief, among other topics.

Americans are broadly supportive of President Joe Biden’s early handling of the coronavirus pandemic, a new poll finds, and approval of his stewardship of the economy has ticked up following passage of a sprawling $1.9 trillion relief bill.

But Americans are more critical of Biden’s early approach to some of the hot-button issues that are moving to the forefront, including guns and immigration, according to the survey from The Associated Press-NORC Center for Public Affairs Research. The president has outlined goals for tackling both issues but has made clear that they are not his immediate legislative priorities.

"I’m going to deal with all those problems. The question is the priorities as they come and land on my plate," Biden said in a news conference last week. 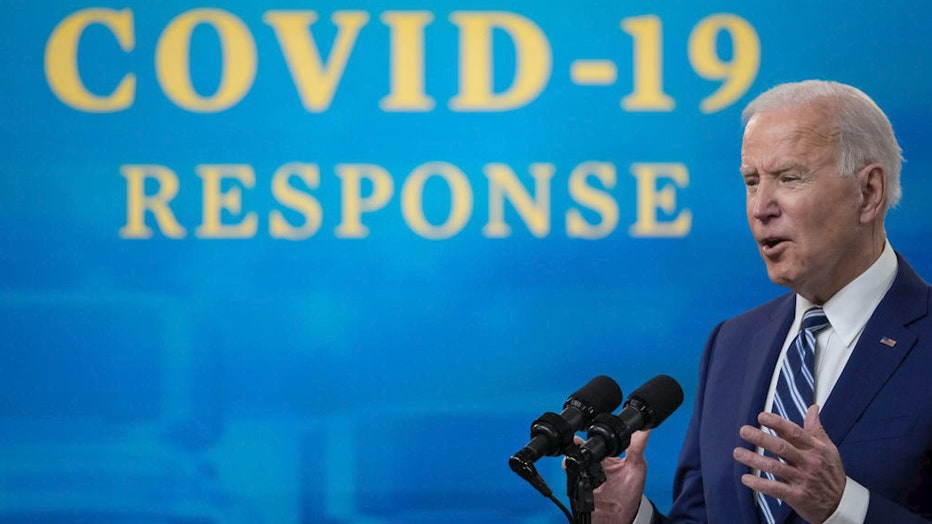 FILE - U.S. President Joe Biden delivers remarks on the COVID-19 response and the state of vaccinations in the South Court Auditorium at the White House complex on March 29, 2021 in Washington, DC.

RELATED: COVID-19 3rd leading cause of death in 2020, pushed total US deaths beyond 3.3 million

Biden's early weeks in office have made it abundantly clear that his top priority is curtailing the pandemic: urging Americans to take precautionary measures to slow the spread of COVID-19, prioritizing the rollout of vaccines and pushing the relief bill through Congress in a party line vote. Vaccine distribution has soared since Biden took office, with more than 96 million Americans having received at least one dose.

Americans have responded favorably to the president's approach, with 73% approving of his handling of the pandemic. That includes about half of Republicans, a rarity given how divided Americans have been along party lines on many key issues in recent years.

Gwen Medley, a nurse from Galveston, Texas, who has been administering vaccines in her state, is among them. The 66-year-old Republican is critical of Biden on a range of other issues, including immigration, but said the president is doing a "pretty good job" on the pandemic so far — in part, she says, because of vaccine efforts he inherited from the Trump administration.

"Trump got the ball rolling, and Biden is continuing to push that ball," Medley said.

Notably, Biden’s approval rating on the economy has ticked up slightly since passage of the relief bill, which included direct payments to millions of Americans and aid to schools and state and local governments. Sixty percent of Americans now say they approve of Biden’s handling of the economy, compared with 55% a month ago.

Overall, Biden’s job approval sits at a healthy 61% as he enters his third month in office, according to the AP-NORC survey. That's well above the approval ratings for his predecessor, Donald Trump, at this same point in his presidency. Trump's overall approval rating never topped 50% in an AP-NORC survey.

Biden and his advisers contend that despite the litany of issues facing the country, he will be judged foremost on his handling of the pandemic, now in its second year. The virus has killed more than 550,000 people in the U.S., and even with vaccines more accessible, some states are experiencing a surge in cases as new variants take hold.

RELATED: ‘This is deadly serious’: Biden calls for states to reinstate mask mandates amid uptick in COVID-19 cases

"Our work is far from over," Biden said this week as he implored states to keep mask mandates and other restrictions in place. "The war against COVID-19 is far from won. This is deadly serious."

Much of Biden's efforts have been in sharp contrast to Trump, who emphasized the need to keep businesses open and the U.S. economy humming, even if that meant flouting public health guidelines for controlling the pandemic. Biden has flipped that approach, but also tried to supplement the economy through the legislation he signed into law in early March.

No Republicans in Congress voted for the measure, with some arguing that it unnecessarily added to the federal budget deficit at a time when the economy was already moving in a more positive direction.

On gun policy, 45% say they back Biden's approach, while 52% disapprove. The survey was conducted after a pair of deadly mass shootings, one in Atlanta that killed eight people, including six Asian Americans, and another at a grocery store in Colorado that left 10 people dead. Biden has said he's considering executive actions to tighten gun restrictions, but has also said he believes "rational" legislation could pass the narrowly divided Senate.

He's called on the Senate, in particular, to pass measures already approved by the House that would expand background checks, though he's putting his own political muscle first into a $2 trillion infrastructure package the White House unveiled this week.

Biden is also confronting mounting concerns along the U.S.-Mexico border, where the number of families and migrant children arriving is on the rise. Republicans have blamed the increases on Biden's swift rollback of some of Trump's most aggressive immigration deterrent policies, moves the White House has warned should not be viewed as an open invitation to cross the border.

The White House, in turn, has blamed the situation at the border in large part on the conditions it inherited from the Trump administration. In addition to his executive actions, Biden has unveiled a legislative proposal that would provide an eight-year path to citizenship for millions of people currently in the U.S. illegally.

While much of Biden's early focus has been on domestic matters, foreign policy concerns also loom. The president has a 55% approval rating on foreign policy, putting that issue slightly below his overall job performance. The poll also finds Americans cite the threat to the U.S. from the spread of infectious diseases and the threat from extremist militant groups as among their top concerns, along with China's influence around the world.

Democrats and Republicans have differing concerns about the greatest threats facing the United States. Democrats are more likely than Republicans to cite the spread of infectious diseases (69% to 47%), extremist militant groups (67% to 51%) and climate change (76% to 22%) as threats to the U.S. They also are slightly more concerned about Russia's global influence (50% to 42%).

The AP-NORC poll of 1,166 adults was conducted March 26-29 using a sample drawn from NORC’s probability-based AmeriSpeak Panel, which is designed to be representative of the U.S. population. The margin of sampling error for all respondents is plus or minus 3.6 percentage points.