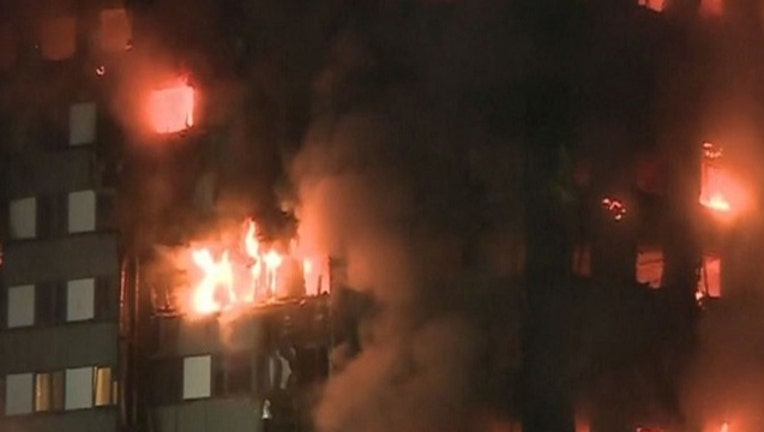 LONDON (AP) — Police are considering filing manslaughter charges related to the fire at a west London apartment tower that killed at least 79 people.

In its most detailed briefing yet on the criminal investigation, the Metropolitan Police on Friday confirmed residents' suspicions that the June 14 inferno at Grenfell Tower was touched off by a refrigerator fire. The department also said exterior cladding attached to the 24-story public housing project during a recent renovation failed safety tests conducted by investigators, and that police have seized documents from a number of organizations.

"We are looking at every criminal offense from manslaughter onwards," Detective Superintendent Fiona McCormack told reporters. "We are looking at all health and safety and fire safety offenses, and we are reviewing every company at the moment involved in the building and refurbishment of Grenfell Tower."

The government has ordered an immediate examination of the refrigerator model that started the fire. McCormack said the Hotpoint model FF175BP refrigerator-freezer had not been subject to any product recalls before the fire.

Hotpoint said Friday that "words cannot express our sorrow at this terrible tragedy" and added it was working with authorities to examine the appliance.

The overnight fire rapidly engulfed Grenfell Tower, with flames shooting up the outside of the building, raising concerns that the cladding material attached to the concrete block didn't comply with fire-safety rules.

Police are looking at all parts of the cladding system and its installation, McCormack said.

Authorities now acknowledge the risks posed by exterior cladding to thousands of people around the country who live in blocks like Grenfell Tower.

The government has called on all building owners, public and private, to submit samples of cladding material used on their buildings for testing. Samples from 14 buildings in London, Manchester and Plymouth have already been found to be combustible.

Fears about cladding are not limited to apartment buildings — at least one hotel chain is calling in experts to make certain it meets safety regulations. Premier Inn said Friday it had "concerns" about the material used on some of its buildings, though it is different from the type used at Grenfell Tower.

McCormack also repeated calls for anyone with information about the fire and all those in the tower at the time to come forward as police continue to comb through the devastated building to try to identify all the victims.

Police says 79 people are either dead or missing and presumed dead in the fire, although that number may change.

To make sure everyone comes forward, London Mayor Sadiq Khan pledged to seek an amnesty for people who may have been living in the public housing block illegally. Prime Minister Theresa May also said the government won't penalize any fire survivors in the country illegally.

"We want to identify all those who died as result of the fire at Grenfell Tower, and that is where I need the public's help," McCormack said. "I do not want there to be any hidden victims of this tragedy."

Firefighters and emergency workers who battled the inferno have been leaving messages and tributes to the victims at a makeshift memorial near the charred apartment block.

Heartbreaking messages written on red London Fire Brigade T-shirts offer poignant tributes alongside flowers, toys and candles at the shrine. One tribute, from a firefighter in the Kensington and Chelsea borough read: "20th floor, we tried... we're sorry."

Another firefighter wrote "Our hearts go out to everyone touched by this tragedy. We did our best I promise."

One shirt bearing the London Ambulance Service logo said: "We refuse to forget you."