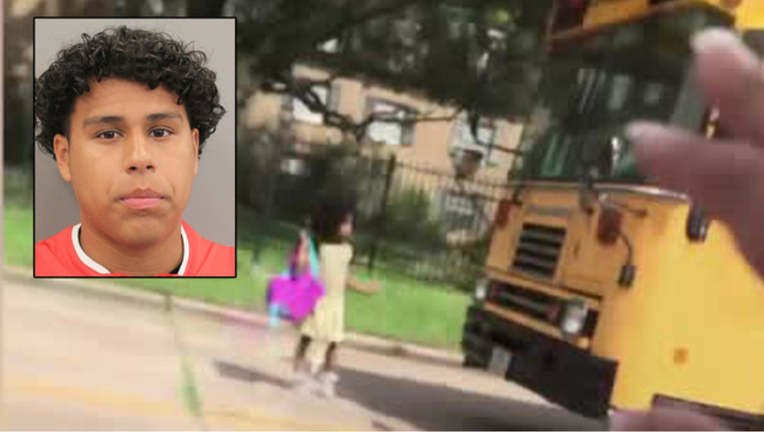 HOUSTON (FOX 26) - Houston police have arrested the driver they say drove past a stopped school bus and nearly hit a 5-year-old girl.

Julio Coreas, 18, was arrested Tuesday and charged with reckless driving for the incident on August 28.

A video recorded last month led to the investigation. Josephine Kirk-Taylor was waiting for her daughter's bus to arrive after her first day of school. It pulled up on the opposite side of the street.  The video shows her little girl coming around the side of the bus to cross the street, and a car drives past the bus as the mother yells, “stop”.

“A driver made the conscious decision to disregard the lights, the flashing lights, and the stop sign that says ‘STOP’ when this little girl was being delivered to her mom," says Houston Police Chief Art Acevedo. "And thank god that that little girl reacted to what I believe is the reckless indifference and the want and willful disregard for a state law that is designed to protect the most precious cargo of any vehicle on our roadways – and that’s our children. She was able to save her own life through her own actions.”

According to Texas law, drivers must stop for flashing red lights on a school bus, regardless of which direction they are traveling. Drivers can continue traveling once the bus has moved, the flashing lights stop flashing or the bus driver signals that it is okay to pass.