Grapevine police cleared the scene, but are continuing to investigate reports of a man who made threats to open fire at Great Wolf Lodge Christmas night.

GRAPEVINE, Texas - Grapevine police cleared the scene, but are continuing to investigate reports of a man who made threats to open fire at Great Wolf Lodge Christmas night.

According to police, just after 9 p.m., they got a report of a man who made threatening injuries and claimed to have a gun.

Several more witnesses then reported a hotel guest being threatened. Police said the threat was made in a guest's room on the 8th floor, and the hotel directed guests to a safe, secure location.

That sent guests into lockdown mode.

Families were celebrating Christmas at the resort, when all of a sudden, there were reports of a man claiming he was going to open fire.

One family said they were separated during the time they found out what was going on.

"The entire floor was all evacuated, and within a second or two, somebody immediately ushered us out into one of the back kitchens," Carlos Smith recalled.

Carlos was staying overnight at the water park with his wife and three kids. He and his 6-year-old daughter, Channing, had just left their room to get something out of their car when they were escorted into hiding.

"They held us there for quite a bit. They tried to evacuate us," he said.

But they wouldn’t leave without the rest of their family, who were still inside their room, with plenty of concerns.

"You know, just not knowing if they were safe, because he had called. He said, ‘I don’t want to talk long, but there’s reports of an active shooter. We’re in the back of the kitchen. I’ll try to keep you updated,’ and then it was, he hung up," Christie Smith recalled. 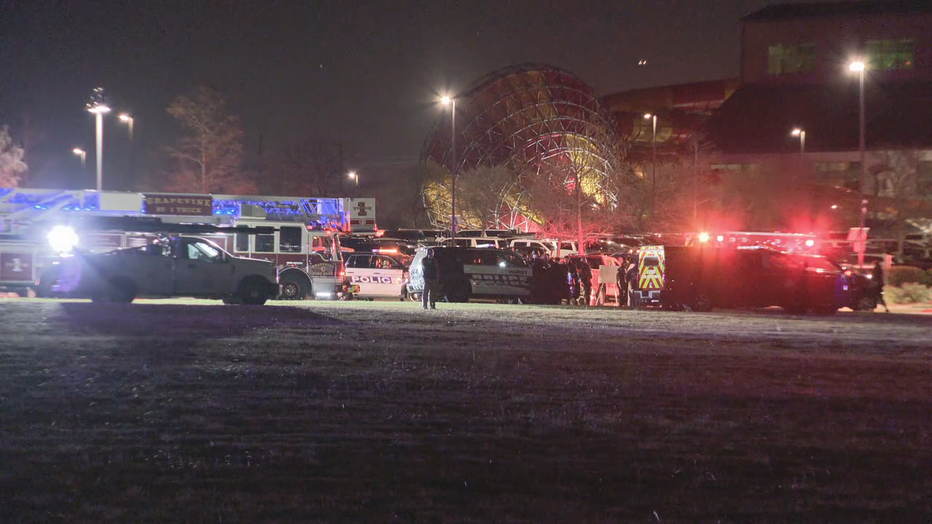 The Smiths said they were apart for 15 minutes, never knowing exactly what was going on.

"I think that’s what it was. Just, you know, him being away and you’re like, ‘OK,’ and this little one was like, ‘I think we should pray,’ so we all sat in bed and we prayed," Christie said.

Police, who are still searching for the man, said the following before clearing the scene:

"Right now, we don’t have reports of shots fired. We have no injuries. We have no suspect. We are going to go room by room to make sure everyone inside is safe," said Amanda McNew, with Grapevine PD.

It was a nerve-racking way to spend Christmas.

"He was pretty chill. I think he was worried, but he was a little rattled. He was scared, I think he was nervous with just the unknown," Christie said.

But the Smiths are grateful no one was hurt.

The scene was cleared at 2 a.m., but officers remained on the scene as a precaution.