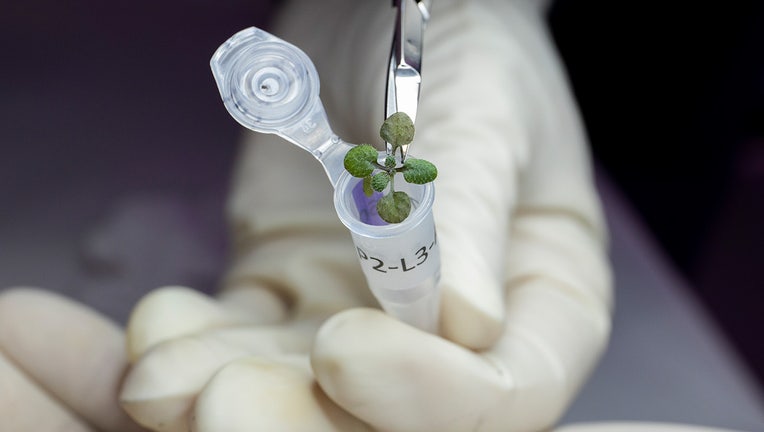 Placing a plant grown during the experiment in a vial for eventual genetic analysis. (Tyler Jones, UF/IFAS via NASA)

CAPE CANAVERAL, Fla. - For the first time, scientists have grown plants in soil from the moon collected by NASA’s Apollo astronauts.

Researchers had no idea if anything would sprout in the harsh moon dirt and wanted to see if it could be used to grow food by the next generation of lunar explorers. The results stunned them.

"Holy cow. Plants actually grow in lunar stuff. Are you kidding me?" said Robert Ferl of the University of Florida’s Institute of Food and Agricultural Sciences.

Ferl and his colleagues planted thale cress in moon soil returned by Apollo 11′s Neil Armstrong and Buzz Aldrin, and other moonwalkers. The good news: All of the seeds sprouted.

The downside was that after the first week, the coarseness and other properties of the lunar soil stressed the small, flowering weeds so much that they grew more slowly than seedlings planted in fake moon dirt from Earth. Most of the moon plants ended up stunted. 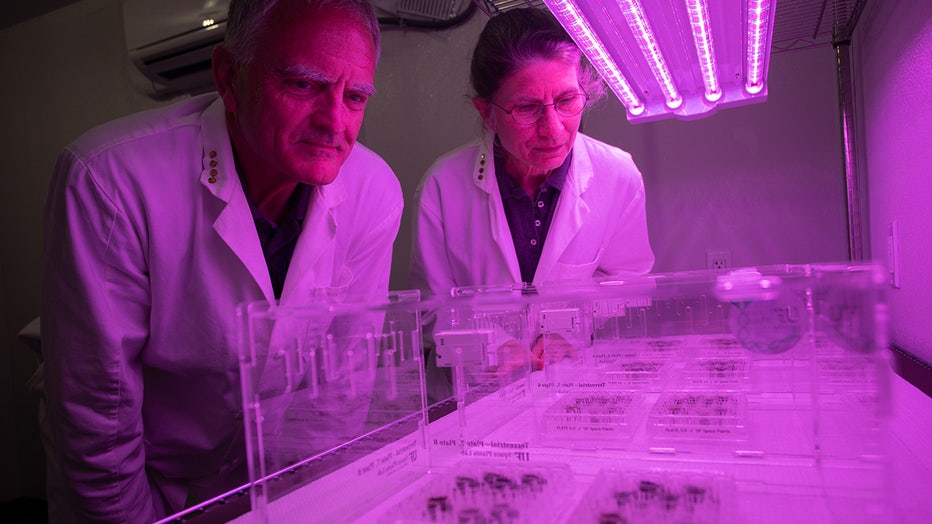 Rob Ferl, left, and Anna-Lisa Paul looking at the plates filled part with lunar soil and part with control soils, now under LED growing lights. At the time, the scientists did not know if the seeds would even germinate in lunar soil. (Tyler Jones, UF/IFAS via NASA)

The longer the soil was exposed to punishing cosmic radiation and solar wind on the moon, the worse the plants seemed to do. The Apollo 11 samples — exposed a couple billion years longer to the elements because of the Sea of Tranquility’s older surface — were the least conducive for growth, according to scientists.

"This is a big step forward to know that you can grow plants," said Simon Gilroy, a space plant biologist at the University of Wisconsin-Madison, who had no role in the study. "The real next step is to go and do it on the surface of the moon."

Moon dirt is full of tiny, glass fragments from micrometeorite impacts that got everywhere in the Apollo lunar landers and wore down the moonwalkers’ spacesuits.

One solution might be to use younger geologic spots on the moon, like lava flows, for digging up planting soil. The environment also could be tweaked, altering the nutrient mixture or adjusting the artificial lighting, 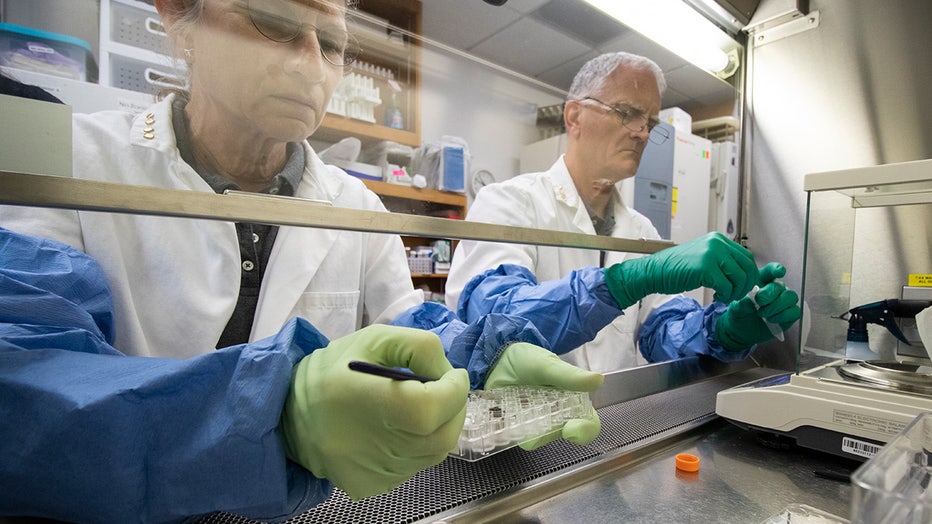 Anna-Lisa Paul, left, and Rob Ferl, working with the lunar soils in their lab. (Tyler Jones, UF/IFAS via NASA)

Only 842 pounds (382 kilograms) of moon rocks and soil were brought back by six Apollo crews. Some of the earliest moon dust was sprinkled on plants under quarantine with the Apollo astronauts in Houston after returning from the moon.

Most of the lunar stash remained locked away, forcing researchers to experiment with simulated soil made of volcanic ash on Earth. NASA finally doled out 12 grams to the University of Florida researchers early last year, and the long-awaited planting took place last May in a lab.

NASA said the timing for such an experiment was finally right, with the space agency looking to put astronauts back on the moon in a few years. 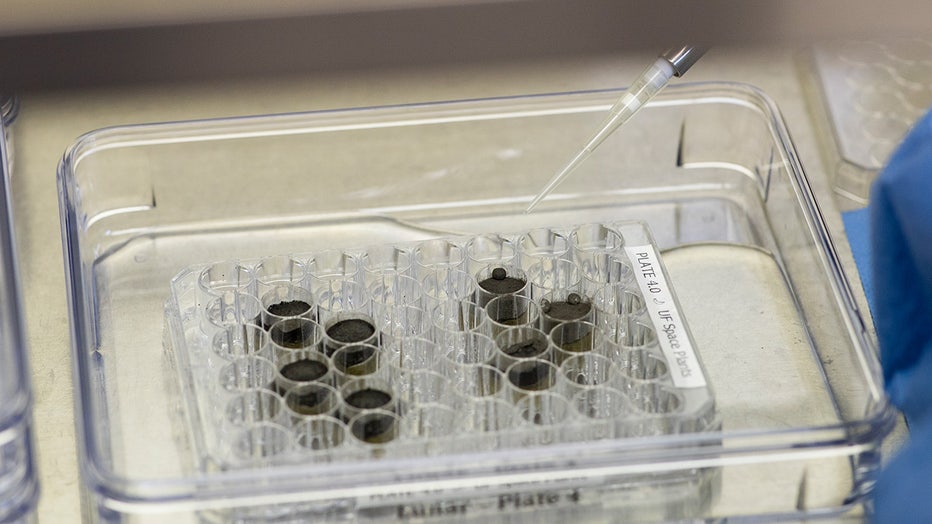 Anna-Lisa Paul tries moistening the lunar soils with a pipette. The scientists found that the soils repelled water (were hydrophobic), causing the water to bead-up on the surface. Active stirring of the material with water was required to break the h (Tyler Jones, UF/IFAS via NASA)

The ideal situation would be for future astronauts to tap into the endless supply of available local dirt for indoor planting versus setting up a hydroponic, or all-water, system, scientists said.

"The fact that anything grew means that we have a really good starting point, and now the question is how do we optimize and improve," said Sharmila Bhattacharya, NASA’s program scientist for space biology, 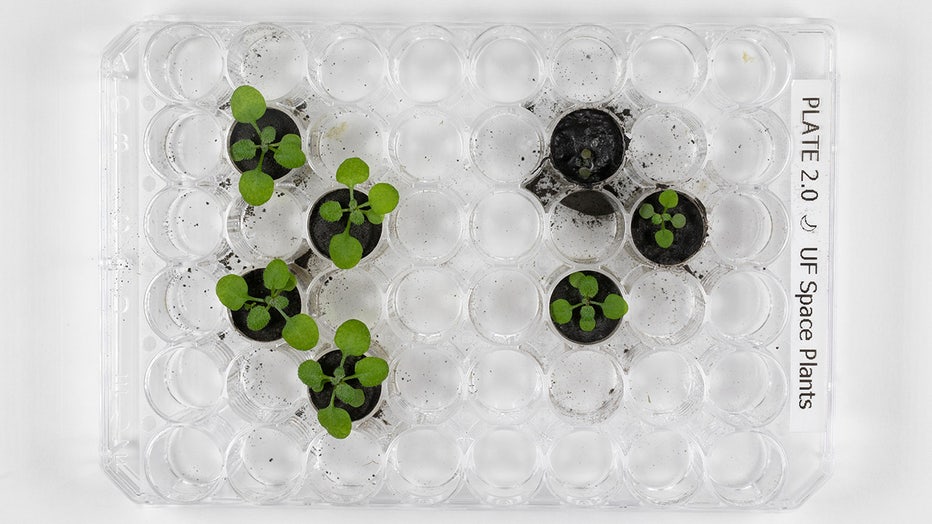 By day 16, there were clear physical differences between plants grown in the volcanic ash lunar simulant, left, compared with those grown in the lunar soil, right. (Tyler Jones, UF/IFAS via NASA)

The Florida scientists hope to recycle their lunar soil later this year, planting more thale cress before possibly moving on to other vegetation.