A couple says they're disgusted after a hit-and-run in Fort Worth caught on their personal dashcam.

FORT WORTH, Texas - A couple says they're disgusted after a hit-and-run in Fort Worth caught on their personal dashcam.

The video of the spinning crash along I-35 W is jarring.

But what's even worse? Less than a minute after impact, the person in the other car drove off.

Crisol Duffin’s dash camera captured it all when another driver traveling the same direction north on 35W near Meacham Blvd. simply crashed into her. It was Sunday around 5 a.m.

Police say the other car was trying to pass Crisol on the right lane when he failed to clear his lane for a lane change, hitting her and causing her to spin out.

"The only thing I could think was to just grab my steering wheel really fast and really hard and just let the car do whatever it's going to do because there’s nothing else I can do. It was so fast," she said. "It was just so terrifying. I thought I was going to hit the wall and roll down. That’s what I thought would happen at that moment." 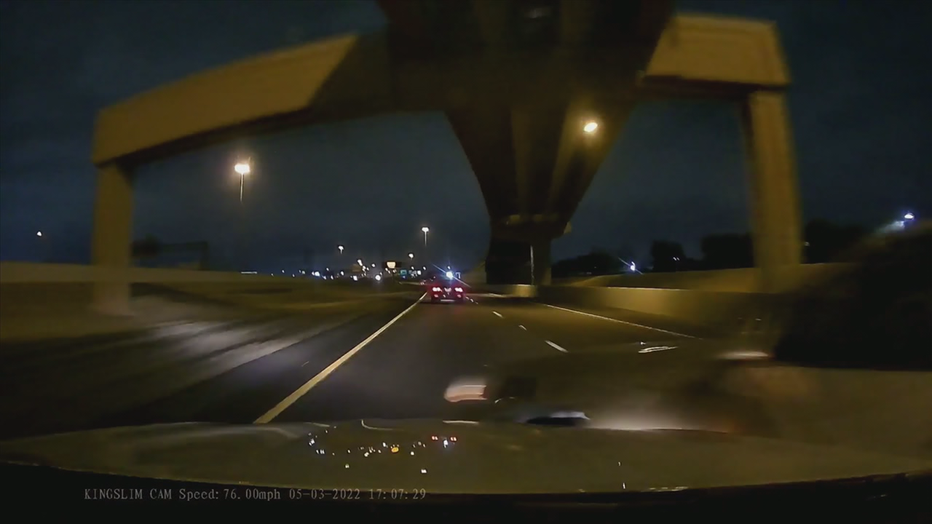 As Crisol sat in a grassy area looking at the driver who crashed into her, he started to move his vehicle but not toward a safer position. The person just took off.

"What a coward. Not even to come check on me. What kind of person is that?" she said.

Crisol’s husband, Eric Duffin, was home asleep at the time and rushed to the accident scene. He recently installed the dash cam because of another traffic incident involving their car being hit.

"I saw the video probably an hour after the accident because I had to get the video off the dashcam and download it," he said. "I was absolutely disgusted. I was disgusted. How can a person then just take off without even checking on somebody? Yeah, I was disgusted."

Fort Worth police are investigating Sunday's crash, including a careful examination of the high quality and disturbing video.

The accident has left Crisol with a bad neck injury and the realization that it could’ve been so much worse. They are sharing the video with intention.

"Hopefully, people can become more aware of the type of drivers and the aggression. And also I hope that this person or someone can help. And this person is held accountable for what he did," Crisol said. "I just want that person to be accountable."