The Senate and the House have passed a bill that would make Juneteenth, or June 19th, a federal holiday commemorating the end of slavery in the United States.

FORT WORTH, Texas - The Senate and the House have passed a bill that would make Juneteenth, or June 19th, a federal holiday commemorating the end of slavery in the United States.

It’s exciting news for Opal Lee, the Fort Worth grandmother who has been lobbying for the observance to be nationally recognized. But she says we have more hurdles ahead when it comes to things like giving people equal access to healthcare.

The bill would lead to Juneteenth becoming the 12th federal holiday. It easily passed the House Wednesday, which will send it to President Joe Biden for his signature.

"We’ve waited so long and worked so hard to see Juneteenth a national holiday, and here it is almost at our fingertips," Lee said. "So, hey! I’m on top of the world!" 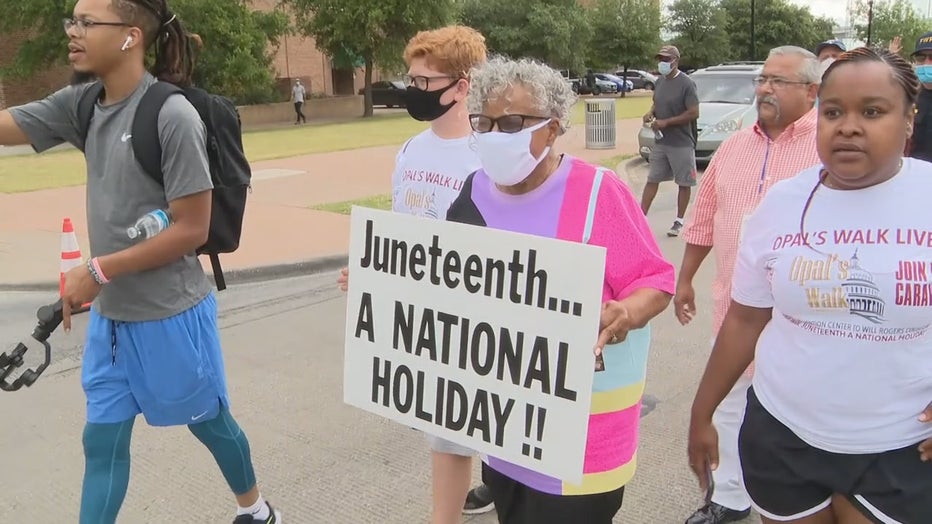 On Wednesday, Lee’s 40-year journey was paired with the topic of healthcare disparities.

"Oftentimes, physicians will say here is this medication. Go home. I want you to eat better. More fruits and vegetables, and change your diet," Dr. Scantlebury said. "Well, if they live in a place where they don’t have access to that kind of stuff, then how are they supposed to get those kinds of ingredients? So it’s really important to bring all these components into our healthcare."

The media tour for Lee is the ramp up to Saturday and the first national simulcast of the 2.5-mile walk she began modestly in 2016. The distance reflects how many years it took until Texas slaves learned of the emancipation proclamation or their freedom.

Last year’s walk during the pandemic was a major show of diversity and support for Lee’s cause.

The bill is sponsored by Sen. Edward Markey, D-Mass., and had 60 co-sponsors. He tweeted Monday: "We have a long road towards racial justice in the United States and we cannot get there without acknowledging our nation’s original sin of slavery. It is long past time to make Juneteenth a federal holiday."

The vast majority of states recognize Juneteenth as a holiday or have an official observance of the day, and most states hold celebrations. Juneteenth is a paid holiday for state employees in Texas, New York, Virginia and Washington.

Under the legislation, the federal holiday would be known as Juneteenth National Independence Day.

FOX will provide a live stream of Opal Lee's walk this Saturday beginning at 10 a.m. You can watch the event on FOX Soul, which is online and available through Tubi, Roku, Amazon Fire TV and other service providers.