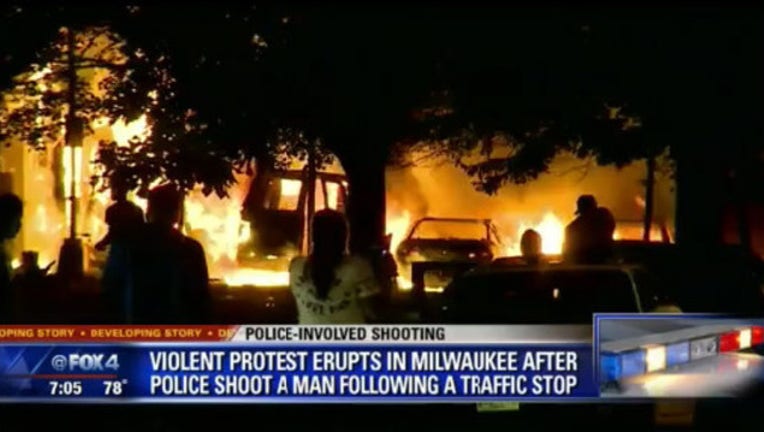 MILWAUKEE (AP) — Police said one person was shot at a Milwaukee protest on Sunday and officers used an armored vehicle to retrieve the injured victim and rush the person to a hospital, as tense skirmishes erupted for a second night following the police shooting of a black man.

Some two dozen officers in riot gear confronted about 150 people who blocked an intersection near where the black man was fatally shot Saturday afternoon, and more arrived. Police moved in to try to disperse the crowd and warned of arrests after protesters threw bottles and rocks at police.

Local television showed a small group of protesters running through the streets, picking up orange construction barriers and hurling them out of the way. Police tweeted three locations where they said shots were fired. There were no other reports of injuries at Sunday's protests and no widespread destruction of property.

Earlier in the day, police Chief Edward Flynn said the man whose death touched off Saturday night's rioting was shot after he turned toward an officer with a gun in his hand.

Flynn cautioned that the shooting was still under investigation and authorities were awaiting autopsy results, but that based on the silent video from the unidentified officer's body camera, he "certainly appeared to be within lawful bounds."

At the same news conference, Mayor Tom Barrett said a still image pulled from the footage clearly showed a gun in 23-year-old Sylville K. Smith's hand as he fled a traffic stop Saturday.

"I want our community to know that," Barrett said. But he also called for understanding for Smith's family.

"A young man lost his life yesterday afternoon," the mayor said. "And no matter what the circumstances are, his family has to be hurting."

Flynn declined to identify the officer who shot Smith but said he is black. The police chief said he wasn't sure what prompted the stop but described Smith's car as "behaving suspiciously." The officer involved was 24 years old and has been on the force for three years, according to the department.

After watching the officer's body camera footage, Flynn said the entire episode took about 25 seconds, from the start of the traffic stop until shots were fired. He said Smith ran "a few dozen feet" and turned toward the officer while holding a gun.

"It was in his hand. He was raising up with it," the chief said. He said the officer had told Smith to drop the gun and he did not do so. It was unclear how many rounds the officer fired. Smith was hit in the chest and arm, Flynn said.

Six businesses were burned in the unrest earlier in the weekend and 17 people people were arrested, Flynn said. Four officers were hurt from flying concrete and glass, although all of them had been released from hospital.

Milwaukee Alderman Khalif Rainey, who represents the neighborhood that erupted, said the city's black residents are "tired of living under this oppression."

Milwaukee County Sheriff David Clarke said Smith had been arrested 13 times. Online court records showed a range of charges against Smith, many of them misdemeanors.

The Milwaukee Journal Sentinel reported that Smith was also charged in a shooting and was later charged with pressuring the victim to withdraw testimony that identified Smith as the gunman. The charges were dropped because the victim recanted the identification and failed to appear in court, Chief Deputy District Attorney Kent Lovern told the newspaper.

Smith's sister told The Associated Press that the family wants prosecutors to charge the officer who shot him.

Kimberly Neal, 24, spoke as supporters surrounded her at the vigil as she held a bouquet of blue balloons.

She asked people for donations for his burial.

Asked about the violence, Neal said: "People stuck together and they are trying to stand up," for their rights.

The anger at Milwaukee police is not new and comes as tension between black communities and law enforcement has ramped up across the nation, resulting in protests and the recent ambush killings of eight officers in Baton Rouge, Louisiana, and Dallas.

Nearly 40 percent of Milwaukee's 600,000 residents are black, and they are heavily concentrated on the north side.

Milwaukee was beset by protests and calls for police reform after an officer shot and killed Dontre Hamilton, a mentally ill black man, in 2014.

In December, the U.S. Justice Department announced it would work with Milwaukee police on changes.

Critics said the police department should have been subjected to a full Justice Department investigation like the one done in Ferguson, Missouri, after the killing of black 18-year-old Michael Brown in 2014 touched off violence there.

Associated Press writers Gretchen Ehlke in Milwaukee and Kyle Potter in Minneapolis contributed to this report.