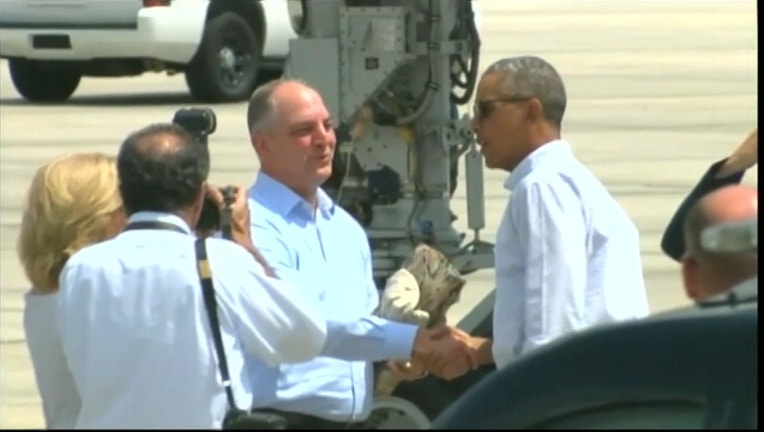 WASHINGTON (AP) — President Barack Obama is making his first visit to flood-ravaged southern Louisiana as he attempts to assure the many thousands who have suffered damage to their homes, schools and businesses that his administration has made their recovery a priority.

The Baton Rouge visit Tuesday is a reminder of the political dangers and opportunities that natural disasters can pose. On top of a competent federal response, it's critical for political leaders to demonstrate compassion and a reassuring sense of engagement.

Citing security concerns, the White House released few details about Obama's itinerary in advance. But during his afternoon in Louisiana, Obama planned to tour a neighborhood in Baton Rouge Parish damaged by flooding, comfort affected residents, meet with state and local officials, and thank first-responders, the White House said.

Obama took some criticism by opting to complete his family's two-week vacation in Martha's Vineyard, Massachusetts, before inspecting the flood damage personally and meeting with local residents. An editorial headline in the Baton Rouge Advocate last week read: "Our Views: Vacation or not, a hurting Louisiana needs you now, President Obama."

The White House said Obama is willing to assume criticism about "optics" as long as the federal response is up to par.

"The survivors of the flooding in Louisiana are not well served by a political discussion; they're well served by a competent, effective, strong, coordinated government response," White House spokesman Josh Earnest said Monday. "And the federal government has certainly done our part in the first eight to 10 days after this disaster, but there's a long road ahead."

GOP presidential nominee Donald Trump visited Baton Rouge on Friday, hugging victims and driving through some of the hardest-hit neighborhoods, where the entire contents of homes were piled on the curb.

Democratic nominee Hillary Clinton issued a statement Monday saying she would visit the communities affected by the flooding "at a time when the presence of a political campaign will not disrupt the response, to discuss how we can and will rebuild together."

The storm and its flooding have damaged an estimated 60,000 homes and forced thousands to seek temporary housing. More than 106,000 people have registered for federal disaster aid, with the state saying $20 million has been distributed to individuals so far. At least 40 state highways remained closed.

Nearly 11 years ago, Hurricane Katrina's crippling of New Orleans and the coasts of Mississippi and Alabama demonstrated how political leaders cannot afford to underestimate the gravity of responding to natural disasters with force and immediacy. In 2005, then-President George W. Bush was faulted by critics for flying over but not touching down in Louisiana in the immediate aftermath of Hurricane Katrina, a decision he years later described as a mistake.

In 2012, Obama and GOP presidential nominee Mitt Romney wasted no time in heading to Louisiana to see the damage from Hurricane Isaac.

The White House on Monday pointed to praise for the federal government from the state's Democratic governor and Republican lieutenant governor as evidence of an effective response. And it dismissed criticism of Obama's decision to stay away during the first week-and-a-half after the flooding as politically motivated.

Gov. John Bel Edwards, a Democrat who took office this year, said he suggested to Obama and presidential adviser Valerie Jarrett that they delay a trip to Louisiana until the initial disaster response was over and recovery efforts had started.

Obama signed a disaster declaration on August 14 that makes federal funding available for assistance such as grants for temporary housing and home repairs, and low-cost loans to cover losses for uninsured property. He subsequently dispatched FEMA Administrator Craig Fugate and Homeland Security Secretary Jeh Johnson to the region.

"I think the effectiveness of the response thus far speaks for itself," Earnest said. "And I think frankly, it's the most effective way to answer any of the politically motivated criticism that the president has faced."