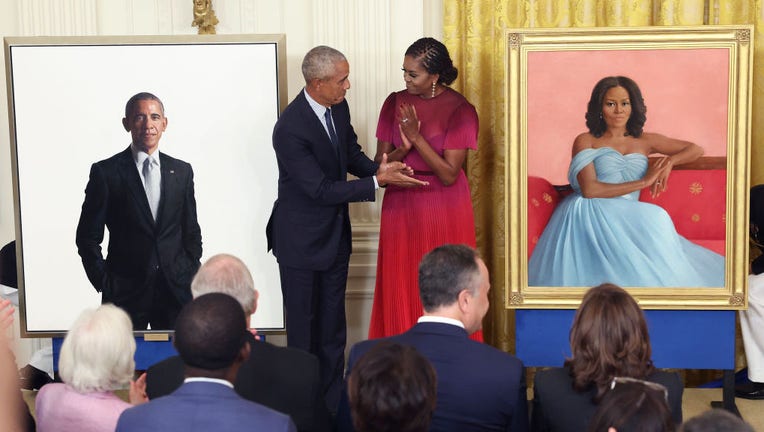 WASHINGTON - The Obamas returned to the White House for the first time together since they left in 2017. Barack and Michelle Obama will have their official portraits unveiled Wednesday, reviving a tradition last celebrated 10 years ago.

"Barack and Michelle, welcome home," President Joe Biden said before he invited the Obamas to the stage to unveil the portraits. Some in the audience gasped, others applauded.

"It's great to be back," Obama said when it was his turn to speak. He praised Biden — his vice president — as someone who became a "true partner and a true friend."

The artist whom Barack Obama selected to paint his portrait says the "stripped down" style of his works helps create an "encounter" between the person in the painting and the person looking at it. 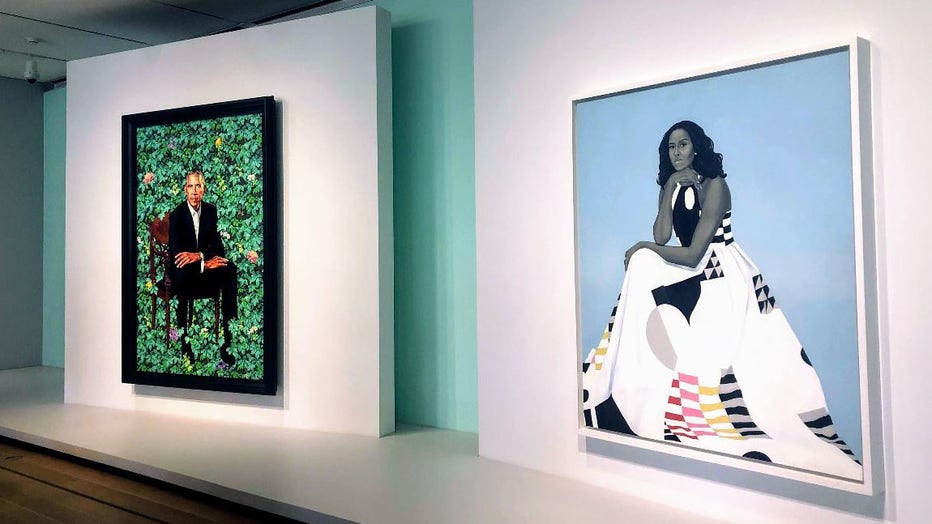 The Obama portraits at the Chicago Institute of Arts in July 2021, as part of a five-city tour organized by the Smithsonian’s National Portrait Gallery. (Photo: FOX Television Stations)

Robert McCurdy likes to present his subjects without any facial expression and standing against a white background, which is how America's 44th and first Black president will be seen here for posterity, in a black suit and gray tie.

The portraits do not look like any others in the collection to which they will be added, in terms of style and substance.

McCurdy told the White House Historical Association for the latest edition of its "1600 Sessions" podcast that his style is "stripped down for a reason." He's also done portraits of South Africa's Nelson Mandela, Amazon’s Jeff Bezos and the Dalai Lama, among others.

"They have plain white backgrounds, nobody gestures, nobody — there are no props because we're not here to tell the story of the person that's sitting for them," McCurdy said. "We're here to create an encounter between the viewer and the sitter."

The Obamas were joined at the event by family, friends, former cabinet members, and top staffers from the administration, CNN reported.

Wednesday’s ceremony marked Michelle Obama’s first visit to the White House since Obama’s presidency ended in January 2017 and only the second visit for Barack Obama. He was at the White House in April to mark the 12th anniversary of the health care law he signed in 2010. 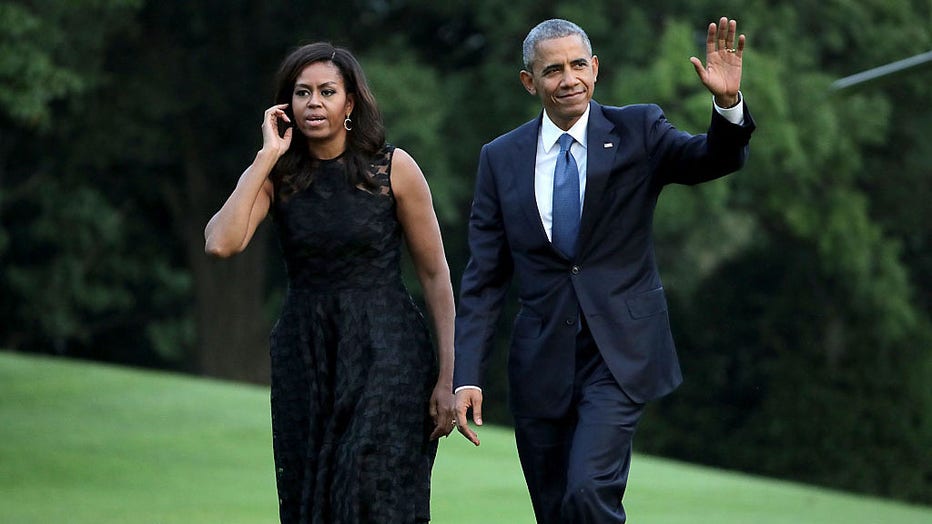 FILE-President Barack Obama (R) and first lady Michelle Obama walk across the South Lawn after returning to the White House on Marine One July 12, 2016 in Washington, DC. (Chip Somodevilla/Getty Images)

Obama's portrait is destined for display in the Grand Foyer of the White House, the traditional showcase for paintings of the two most recent presidents. Clinton's and George W. Bush's portraits currently hang there.

Mrs. Obama's portrait likely will be placed with her predecessors along the hallway on the Ground Floor of the White House, joining Barbara Bush, Hillary Clinton and Laura Bush.

The portrait unveiling revives a tradition of presidents welcoming their predecessors for the first time in a decade.  The ritual stopped during former President Donald Trump’s tenure, the Washington Post reported.

RELATED: Touring portraits of Barack and Michelle Obama are in Brooklyn

Two spokespeople for Trump did not respond to emailed requests from the Associated Press for comment on the lack of a ceremony for Obama, and whether artists are working on portraits of Trump and former first lady Melania Trump.

A history of the presidential portrait collection

Recent tradition, no matter the party affiliation, has had the current president hosting his predecessor for the unveiling — as Bill Clinton did for George H.W. Bush, George W. Bush did for Clinton and Obama did for the younger Bush.

Then there was an unexplained pause when Trump did not host Obama. Two spokespeople for Trump did not respond to emailed requests for comment on the lack of a ceremony for Obama, and whether artists are working on portraits of Trump and former first lady Melania Trump.

The White House portrait collection starts with George Washington, America’s first president. Congress bought his portrait.
Other portraits of early presidents and first ladies often came to the White House as gifts. Since the 1960s, the White House Historical Association has paid for most of the paintings.

The first portraits financed by the association were of Lyndon Johnson and Lady Bird Johnson, and John F. Kennedy and Jacqueline Kennedy, said Stewart McLaurin, president of the private, nonprofit organization established by first lady Kennedy.

Before presidents and first ladies leave office, the association explains the portrait process. The former president and first lady choose the artist or artists, and offer guidance on how they want to be portrayed.

The collection includes an iconic, full-length portrait of Washington that’s displayed in the East Room. It’s the only item still in the White House that was in the executive mansion in November 1800 when John Adams and Abigail Adams became the first president and first lady to live in the White House.

President and first lady portraits are seen by millions of White House visitors, though not all are on display. Some are undergoing conservation or are in storage.

Portraits on display line hallways and rooms in public areas of the White House, including the Ground Floor and its Vermeil and China Rooms, and the State Floor one level above, which has the famous Green, Blue and Red Rooms, the East Room and State Dining Room.

The State Floor hallway one floor above features recent presidents: John F. Kennedy, Lyndon B. Johnson, Jimmy Carter, Ronald Reagan and George H.W. Bush. Gerald Ford’s portrait and the likeness of Richard Nixon — the only president to resign from office — are on view on the Grand Staircase leading to the private living quarters on the second floor.

Past presidents' images move around the White House, depending on their standing with the current occupants. Ronald Reagan, for example, moved Thomas Jefferson and Harry S. Truman out of the Cabinet Room and swapped in Dwight Eisenhower and Calvin Coolidge.

FOX 10 Phoenix and the Associated Press contributed to this story. This story was reported from Washington, D.C.