NASCAR returned Sunday with the Real Heroes 400 at the Darlington Raceway in South Carolina. No fans were in attendance but a North Texas nurse was among those celebrated. FOX 4's David Sentendrey explains.

DALLAS - It was a surreal feeling Sunday for Jake Hopkinson, who is an emergency room trauma nurse at Methodist Dallas Medical Center.

As NASCAR hosted the Real Heroes 400, the first major sporting event in the U.S. since the COVID-19 pandemic began, Hopkinson and other frontline workers from across the country were selected as grand marshals.

FOX4 first met Hopkinson, who is also a United States Marine, when the Blue Angels performed a flyover in North Texas.

Methodist and FOX4 nominated him to be selected for Sunday’s race programming, and then, driver Erik Jones announced on social media that not only would Hopkinson help deliver the message, but his name would also be featured on Jones’ car.

“Jake, from all of us at NASCAR, thank you and we invite you to be one of our grand marshals at our race this Sunday,” Jones said.

Naturally, Hopkinson decided to support Jones by wearing his jersey. 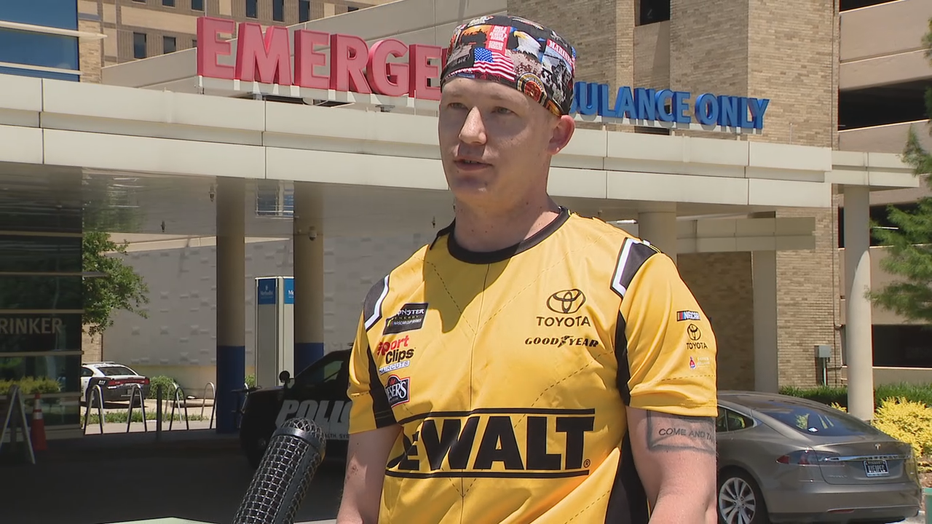 He watched the race during a social distancing party with a handful of co-workers at the hospital.

Fans were not in attendance at Sunday’s race, but for many, just holding the race was a sign of improvement.

“People can start to see the light, you know? This is the first major sporting event since COVID started,” Hopkinson said.

This frontline hero said he hasn’t had time to do much of anything outside of work during the pandemic. He added that it can almost be overwhelming at the hospital sometimes.

“You just learn to adapt and overcome and when situations get difficult. It just makes you a stronger person,” he said.

Now, he’s just grateful to be recognized with others and to represent his colleagues.

“We have each other’s backs. We’re there for each other,” he added.