A Dallas County justice of the peace court in Northwest Dallas was heavily damaged by the EF-3 tornado. That forced employees to begin moving to new offices earlier than expected. It's also forced cases like misdemeanors and small civil disputes to be put on hold.

DALLAS - Employees for a government building damaged by last week's tornado in Dallas say the storm's aftermath has created a lot of confusion.

A Dallas County justice of the peace court in Northwest Dallas was heavily damaged by the EF-3 tornado. That forced employees to begin moving to new offices earlier than expected. It's also forced cases like misdemeanors and small civil disputes to be put on hold.

Civil cases under $10,000, dangerous dog hearings, mental illness warrants and eviction hearings are just a few of the cases that go before JP courts.

Judge Al Cercone's courtroom, one of the busiest JP courts statewide, is literally in shambles. Every scheduled hearing since the Oct. 20 tornado outbreak has been in limbo.

Dallas County Justice of the Peace Court 3, Place 1 is on Marsh Lane, one of the heaviest hit areas from the tornado outbreak. 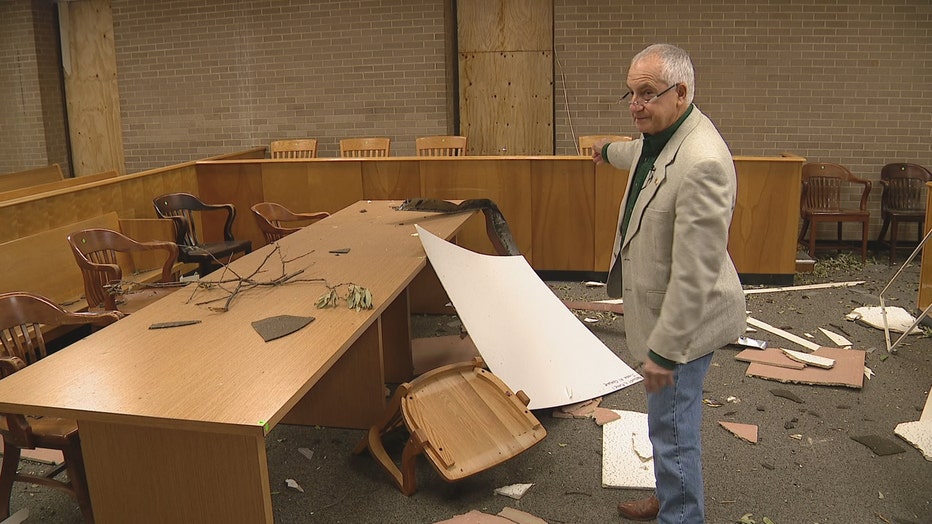 “Every day at 10 o’clock, we start with eviction trials,” Cercone explained. “There could be anywhere from 10 to 170 of those. And at 11 o’clock, we usually have a civil docket.”

They were a month away from a planned move to a new location at LBJ Freeway and Hillcrest before the twister hit. Tens of thousands of case files were unharmed. But the court must have access to them to function.

Outside of the ruined building, people drive up only to find out about the interruption and the new location. The office at LBJ and Hillcrest is open, but only county tax office services are available there right now.

"We didn't have so much of a backlog before, but now we're going to be set off,” Cercone said.

The JP court cases are simply stacking up with no date yet set to resume.

"If they have business here and they're not aware that we got closed down because of the tornado, they need to call the court's number,” Cercone said. “We have clerks answering the telephones to accommodate them and tell them what's going on and what the likelihood is when they'll be back."

Judge Cercone says they are very fortunate the files were not damaged or destroyed. Currently, he says there are records from roughly 100,000 cases to be moved.