A charter jet company helped dozens of athletes from North Texas get to Orlando to compete in the Special Olympics USA Games.

ADDISON, Texas - Dozens of athletes from North Texas are headed to compete in the Special Olympics USA Games in Orlando this year.

A charter jet company based in Addison is helping them get there.

Lenard Davis, 36, joined the Special Olympics when he was just 13 years old.

It’s been an instrumental part of his development, but it was a suggestion from his coach back in 2001 that would change the course of his life.

"I had been doing Special Olympics and my coach said, this is a sport you might like. Sure enough, I started playing it and it got very interesting, so that’s why I love it so much," he said.

That interest would later evolve into a full-blown passion.

Davis has spent a lot of time working on his craft, earning himself a spot on the Special Olympics bocce ball team.

He said the sense of community he has gained, as a result, has been priceless.

"It makes me feel great, just getting to meet people and getting to know everybody, and it has helped me throughout my life," Davis said.

Daniel Hettinger is another athlete who has invested years into his athleticism.

His training has sharpened his game, while also helping with team building and communication.

"I've been practicing hard. I went to a training camp back in August. It was pretty good. It helped me work out and get in shape," he said.

They are just two of the 68 athletes from North Texas heading to the Special Olympics USA Games. 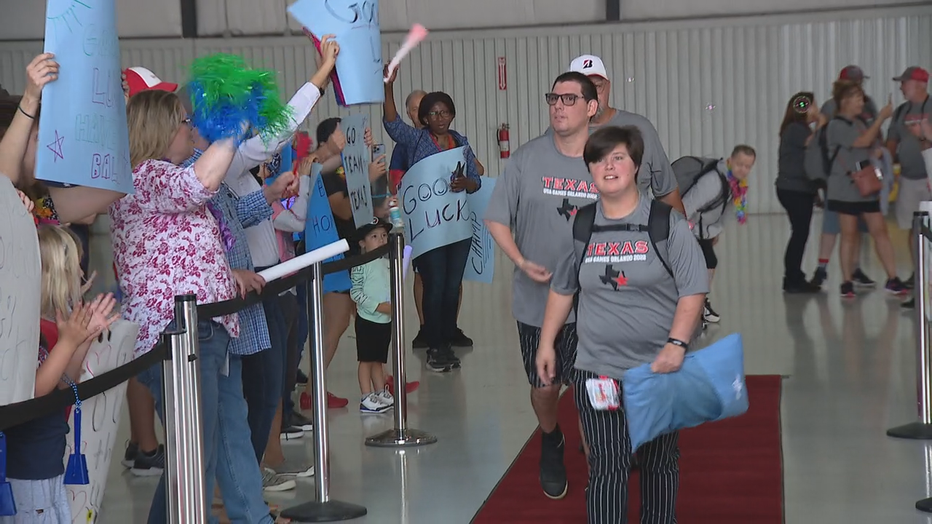 The Special Olympics organization is forever grateful for the companies that worked together to make this possible.

"This is a dream come true for most of our athletes, I would say even staff involved and coaches," said Leah Gambrel, director of development for the Special Olympics North Texas Region. "Getting to go to the USA Games is just an amazing opportunity for our athletes, and getting to ride on these private jets, it's just a miracle, and we are so grateful for all the people that have made this happen."

The athletes have some tough competition ahead of them, but they said the party in the hangar Saturday set the tone for them to bring back the gold.

"They help me a bunch," Davis said.

Athletes from across the country will compete in 20 different sports.

More than 300 Texas-based athletes are traveling to the national games.