Texas mayors from different political affiliations joined forces in a united voice to lobby the state Legislature on a Zoom call Friday. Some of the mayors also voiced additional concerns.

DALLAS - Texas mayors from different political affiliations joined forces in a united voice to lobby the state Legislature on a Zoom call Friday,

The mayors represent 8.5 million Texans from every corner of the state. Eight of the mayors are from North Texas.

"We are boots on the ground and in day-to-day communication with our constituents," said McKinney Mayor George Fuller.

The bipartisan group revealed their priorities for the 88th Texas Legislature, which just convened in Austin this week. They include local governance. 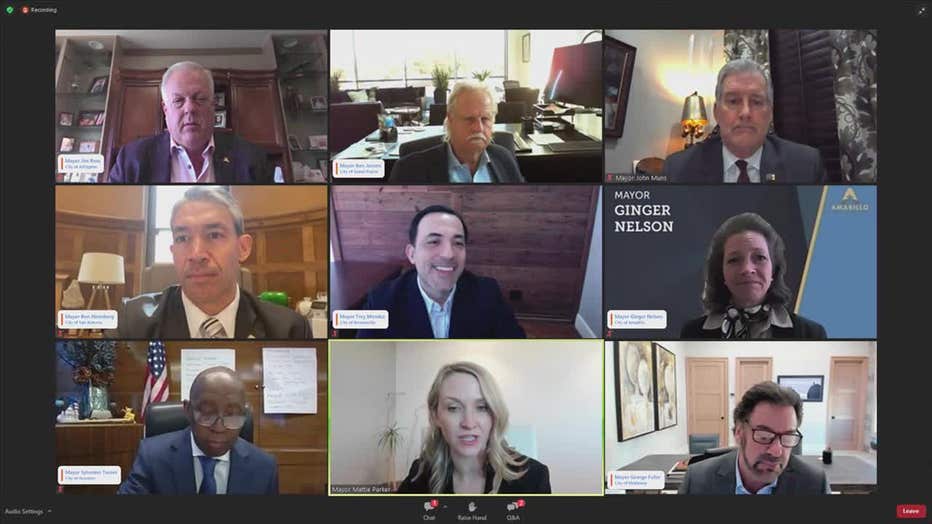 "We've seen nothing shorter than an assault on local control," Fuller said.

Economic development was also mentioned and so was property tax relief, which Gov. Greg Abbott has listed as his top priority with a budget surplus of nearly $33 billion.

The mayors are also rallying for a better-quality education and a well-trained workforce.

"We're going to need an educated workforce if we continue to prosper in the state of Texas," said Plano Mayor John Muns.

On the topic of education, access to broadband technology was a big priority.

"In Fort Worth, we have an estimated 60,000 residents who don't have access to internet in their homes," said Fort Worth Mayor Mattie Parker

The so-called "digital divide" became evident during the pandemic when students needed to log on from home.

Arlington Mayor Jim Ross expressed his concern about the potential for a mass shooting given the city's large entertainment and tourism district.

"Enough is enough," Ross said. "We need to have legitimate gun control enacted in this state."

And on the wish list was an idea from Fort Worth’s mayor to help new mothers.

"What if we piloted the first ever paid family leave program in the state of Texas?" Parker said. "The reality is over one-third of Texas mothers especially do not have access to paid family leave and are back at work in two weeks."

Dallas Mayor Eric Johnson was noticeably absent from the Zoom call. His spokesman says he is technically a member of the coalition but added that Johnson did not participate on the call since Dallas City Council sets its own legislative agenda.