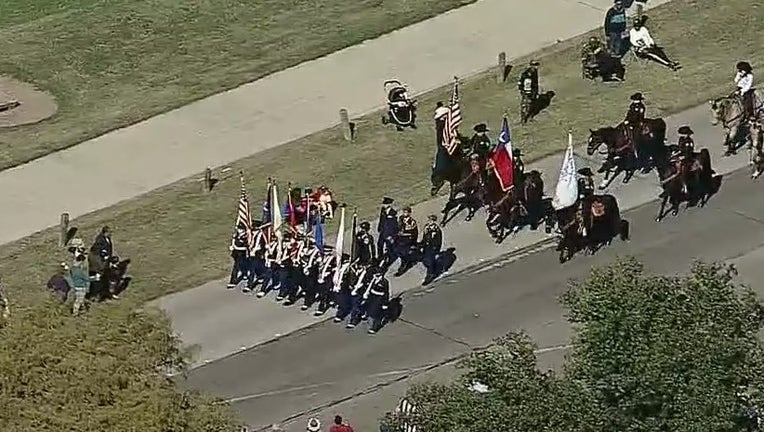 The annual Tarrant County Veterans Day Parade rolled through the streets of Fort Worth Thursday morning.

DALLAS - Across North Texas, several events paid tribute to those who have worn the uniform in our country.

The city of Fort Worth held its 102nd annual Veterans Day parade with mounted cavalry, an aircraft flyover and a 21-gun salute.

The DFW National Cemetery had an event featuring  the Midlothian High School choir, speakers and more. 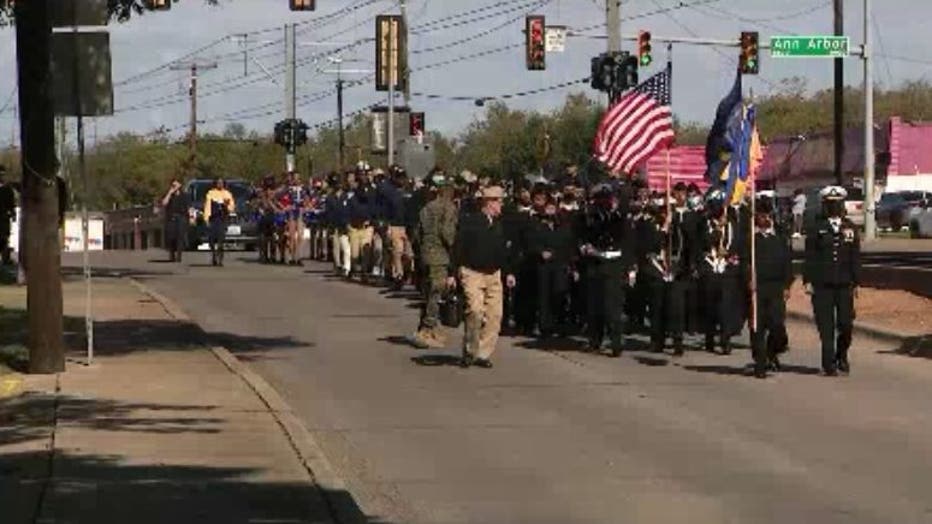 Members of the Greater Dallas Veterans Foundation honored those who served in Iraq and Afghanistan with a ceremony at the Frontiers of Flight Museum in Dallas.

The theme this year was "Commemorating Operation Enduring Freedom," which was the military response to the 9/11 terrorism attacks 20 years ago.

There's still an effort underway to get relatives of U.S. troops out of Afghanistan more than two months after the major U.S. military withdrawal.

It was 20 years ago that this country launched a war on terrorism dubbed Operation Enduring Freedom. Today, those veterans will be honored along with the many others who have served at an event put on by the Greater Dallas Veterans Foundation. Good Day talked to U.S. Army Major General Charles Aris about the event.

U.S. Army Major General Charles Aris, who lost members of his security detail in Afghanistan in 2016, said it's important that their service is recognized.

"I've been really blessed to serve and I try to explain to people only that 1% of people raise their right hand and take an oath. And I think our country's in a good place. You know, we have all kinds of political struggles but there's still men and women willing to raise their hand and understand that they are going to go serve something greater than themselves," he said.

The Greater Dallas Veterans Foundation put together a video honoring those who served in Operation Enduring Freedom. To watch it, visit greaterdallasveteransfoundation.org/2021-theme-%26-events#4e4dfa99-d865-4157-80bf-91fd7857199f.

On this Veterans Day, some of the many service members wounded or injured since Sept. 11 compete on the golf course. They are being hosted by the man who sent many of them to war -- former President George W. Bush.

The highly-competitive golf tournament also promotes camaraderie and rehabilitation for the wounded veterans who are selected to participate.

"The biggest thing is the camaraderie, like seeing these guys that have similar experiences that I do and coming together talking about their experience and my experience and it's very therapeutic as is the game of golf," said U.S. Army Sgt. 1st Class Steve Littlefield.

"I didn't golf until after I got injured. I played college football. After I got injured, a buddy said why don't you come play golf and I said, 'I can't do it, I'm missing two legs.' Finally got out there and I can actually swing the club. It's been great, something I can do and continue to compete and do something athletic like I've done my whole life," said retired Army Capt. Tyson Quink.

Charity collecting wreaths for all veterans at DFW Cemetery

The charity Wreaths Across America works to honor military veterans year around and on Veterans Day. Larry Allen is the director of the local chapter, North Texas Wreaths of Honor. He joined Good Day to talk about the goal of gathering wreaths for all 48,000 veterans buried at DFW National Cemetery.

A local charity is working to provide wreaths for all 48,000 veterans buried at DFW National Cemetery.

Currently the cemetery has wreaths for just over 17,000 graves. But there are about 30,000 more to cover.

"We desperately need help for 30,547. And the key is that they only costs $15 for a wreath," said Larry Allen, the director of the local chapter. "A veteran can die twice, once when they stop breathing and a second time when we stop saying their name. So, while we’re out there and laying those wreaths, our goal is to say their names. We will do that every year as long as this program is going."

The group has been working with Wreaths Across America to collect donations and order the wreaths. Volunteers will place those new wreaths on graves in December.

To make a donation, visit www.wreathsacrossamerica.org/TX0706P.

Veterans Day 2021: 'Make Camo Your Cause' and support those who have served