RIO VISTA, Texas - A North Texas 911 agency launched a project that it hopes will be a game-changer for emergency response.

The North Central Texas Emergency Communications District is using drones to create 3D models of certain areas. The hope is that first responders will be able to tell exactly where callers or threats are right down to the floor a person is on.

911 dispatchers have been able to figure out a person’s location on a map. What the new program does is add the Z-axis, or altitude, that officials say could provide critical information for events like natural disasters or even school shooting.

About 40 miles south of Fort Worth is the quiet community of Rio Vista in Johnson County. It is playing host to what could be a significant shift in emergency response.

Rodger Mann runs the mapping program for The North Central Texas Emergency Communications District, or NCT9-1-1. It maintains the 911 system for 13 counties surrounding the metroplex. His team is using drones to collect photo imaging and GPS data over Rio Vista ISD schools. The project is the first of its kind in Texas and perhaps the first in the country.

“So somebody is in a classroom or an office building or a classroom and have an emergency. Right now, we don’t have a 3D version of where they would be,” explained NCT9-1-1 spokesperson Amelia Mueller. “So we thought how do we solve this problem?”

NCT9-1-1 plans to map schools and eventually hospitals and government buildings. It will use that data to create 3D models that can be accessed by 911 dispatchers and first responders in the field. 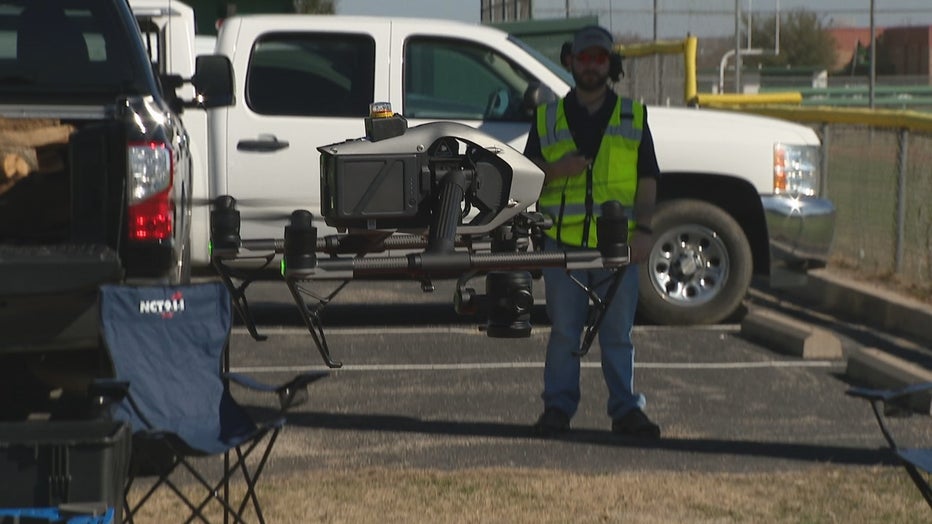 The commercially available data that’s out there is not as sufficient,” Mann said. “It’s not as accurate as what we need. So the drones are a tool for us to capture highly accurate spatial data.”

For those on the frontline, it's data that will allow them to use their resources best in critical situations.

“Being an active shooter or natural disaster, this program will help us tremendously,” said Rio Vista Police Cpl. John Bentley. “Because it eliminates a lot of the guessing where we can actually physically look at something on paper and choose the safest route to bring in first responders.”

NCT9-1-1 says 911 providers have long lagged behind when it comes to implementing technology. The team is hopeful this is a step toward changing that.

“For us, it’s more about doing the legwork and gathering the information for the other industries to be able to come back and say, ‘These are our lessons learned. This is how you can do it in the best way themselves,’” Mueller said.

The Federal Communications Commission recently announced that 911 providers will soon be required to locate wireless callers on the Z-axis with 80 percent accuracy.

NCT9-1-1 says it already has plans to map at least one other school district and is hoping to get others on board soon. It hopes other providers will be able to use the information they learn to create their own systems.