DALLAS - Tarps cover many of the tornado damaged homes in the Metroplex, but with another round of rain moving in, some tornado victims in Northwest Dallas are scrambling to keep their belongings dry.

Others are still hoping to find temporary housing.

Keeping the elements out is a lofty task when so much is exposed after a tornado damaged a large number of homes in Northwest Dallas.

The last thing Jim Joplin wants is for his car and tarped home to take on water as menacing clouds move in Thursday afternoon.

“I don’t mind the rain, I just hope it’s not really strong. It’s loosely tarped up there,” he said. 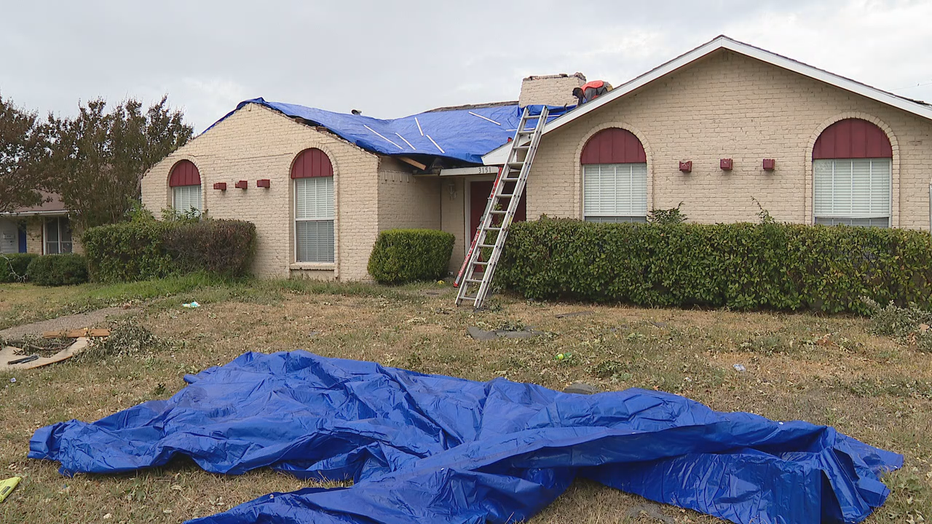 While it’s still dry, piles of debris is being cleared while contractors work faster than approaching storms to secure tornado-ripped homes.

“Unfortunately, if we don’t cover, the damage is going to increase and that’s our concern right now,” said Alberto Atala, with All Trust Contractors.

At the Southwind Apartments, where tornado damage made units unlivable, securing a home has a different meaning for the low-income tenants.

“Still, there’s confusion as to what’s going to happen with the renters,” said Carlos Quintanilla, with Acción America.

The new management company says it’s doing its part and working with the previous owner to offer assistance, which could include returning October’s rent.

“When the roof peeled off, it basically let the rain come right in our house,” Michael Steiner said.

Steiner’s tar and gravel roof ended up in his front yard.

As a generator hums behind him, and clouds build, he’s confident his blue tarps will hold.

“Hopefully, we won’t get too much rain, and that will kind of blow on and let us continue to dry out so we can all start the roofing process,” he added.

There were neighborhoods that seemed deserted by homeowners, but inundated with contractors and workers, all trying to make sure that people are not hit with another round of damage.

“It’s gotten very wet actually. It has complicated things, but we’re trudging on, make sure we’ve got no leaks,” said Rachelle Lapino, with T Rodd Roofing

Contractors, like Lapino, were hard at work, getting everything covered and protected from Thursday's storms, and ready for insurance adjusters.

“That’s why I’m staying out here today, just in case we get those calls about leaks coming through, jump on the roof, get them taken care of,” Lapino said.

“She started helping me to do all the preventative repairs, so, so far, so good,” homeowner Yan Ma said. “We’ve got the roof tarped and window patched. They’ve covering the chimneys, so that’s all we need for now.”

Contractor John Deleon says he too has been rushing to cover exposed areas on tornado-damaged homes for his clients here in North Dallas, including homes that lost roofs entirely.

[REPORTER: “It seems like this whole neighborhood is contractors right now.”] “Yes, hard to get in,” he replied.

And Deleon said rain isn’t the most difficult obstacle, as supplies are hard to come by when everyone seems to be buying, and stores, themselves, have been destroyed.

Many people are now waiting for insurance adjusters.

They’ve done all the repairs and cleanup they can do, for now, but the bigger projects are yet to begin.