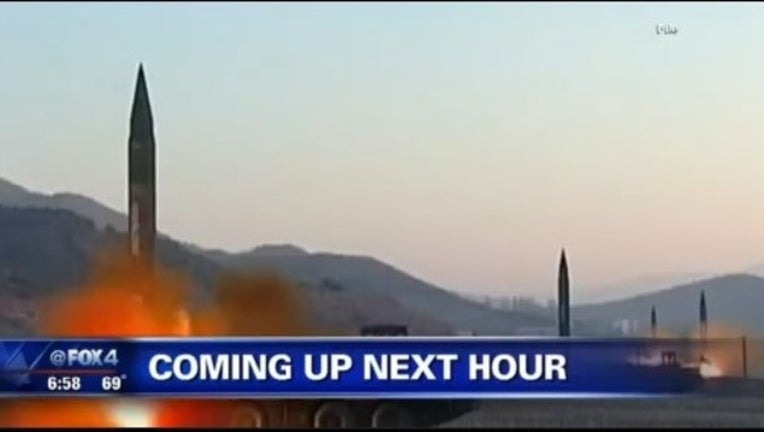 SEOUL, South Korea (AP) - North Korea fired a solid-fuel ballistic missile Sunday that can be harder for outsiders to detect before launch and later said the test was hailed as perfect by leader Kim Jong Un.

The Pukguksong (Polaris)-2 is a land-based version of a submarine-launched missile. The missile advances North Korea's weapons capabilities because solid-fuel missiles can be fired faster and more secretly than those using liquid fuel, which much be added separately and transported to a launch site using trucks that can be seen by satellites.

The rocket was fired near the county of Pukchang in South Phyongan province and flew eastward about 500 kilometers (310 miles), an official from South Korea's Joint Chiefs of Staff said. It reached an altitude of 560 kilometers (347 miles), the official said, speaking on condition of anonymity, citing office rules.

The U.S. Pacific Command said it tracked the missile before it fell into the sea.

KCNA said the test was intended to verify technical indexes of the weapon system and examine its adaptability under various battle conditions before deployment to military units. North Korean leader Kim Jong Un ordered the launch from an observation post and approved its deployment after analyzing the results with officials and finding them perfect, the state news agency said.

The February launch was the North's first missile test after President Donald Trump took office. Sunday's launch followed one a week earlier of a rocket that flew higher and for a longer time than any missile the North has previously launched and could one day reach targets in Hawaii and Alaska. North Korea called that launch a success test of a missile that could carry a heavy nuclear warhead.

U.S. Secretary of State Rex Tillerson said Sunday it was too early to know if the international pressures being exerted on North Korea to discourage its weapons programs were having an impact.

"We're early in the stages of applying the economic pressure as well as the diplomatic pressure to the regime in North Korea," Tillerson said on "Fox News Sunday." ''Hopefully they will get the message that the path of continuing their nuclear arms program is not a pathway to security or certainly prosperity. The ongoing testing is disappointing. It's disturbing."

South Korea's Joint Chiefs of Staff said Monday that Seoul and Washington believe Sunday's test provided North Korea with unspecified "meaningful data" on its push to improve the credibility of missile technology. But spokesman Roh Jae-cheon said the allies believe more analysis is required to verify whether the North has achieved a re-entry technology, which would return a warhead safely back into the atmosphere, for the missile.

In Tokyo, Japanese Prime Minister Shinzo Abe called the launch a "challenge to the world" that tramples international efforts to resolve the North Korean nuclear and missile problems peacefully. He vowed to bring up the issue at this week's G-7 summit in Italy.

At the United Nations, diplomats from the U.S., Japan and South Korea said they requested a Security Council consultation on the missile test. The closed discussion will take place Tuesday. The diplomats spoke on condition of anonymity because the meeting had not been officially announced.

Under third-generation dictator Kim Jong Un, North Korea has been advancing its decades-long goal of putting a nuclear warhead on an intercontinental ballistic missile capable of reaching the U.S. mainland. Its two nuclear tests last year may have improved its ability to make nuclear weapons small enough to fit on long-range missiles. And each successful rocket launch is seen as improving or expanding the range and capabilities of its missile arsenal.

The test of a Pukguksong-2 might be part of attempts to stabilize the system before operationally deploying the missiles, said Kim Dong-yub, an analyst at Seoul's Institute for Far Eastern Studies.

Kim said there's also a possibility that the North is conducting engine tests and other experiments as it pushes for the development of a solid-fuel intercontinental ballistic missile that could potentially reach the U.S. mainland. If the North ever obtains a solid-fuel ICBM, it would likely be a rocket powered by a cluster of several Pukguksong-2 engines, Kim said.

Missile tests such as Sunday's present a difficult challenge to Moon, a liberal who took over as South Korea's president on May 10 and has expressed a desire to reach out to the North. Pyongyang's aggressive push to improve its weapons program also makes it one of the most urgent foreign policy concerns for the Trump administration.

South Korea's Foreign Ministry said in a statement that the North's latest launch "throws cold water" on the expectations by Moon's government to "stabilize peace and denuclearize the Korean Peninsula."