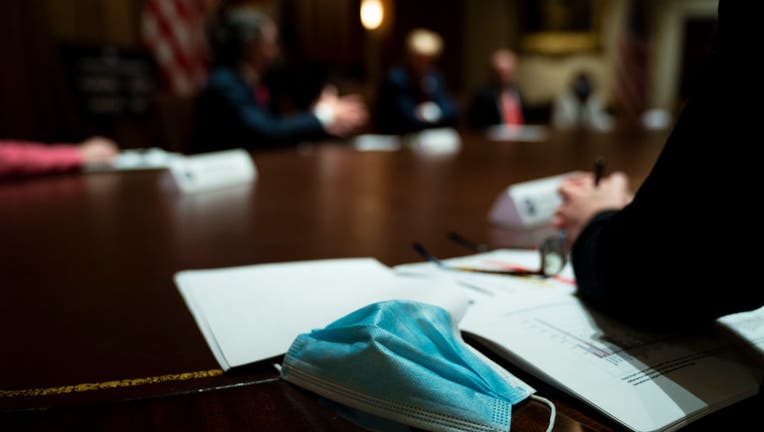 FILE - A mask sits on the table as U.S. President Donald Trump meets with North Dakota Governor Doug Burgum and Colorado Governor Jared Polis in the Cabinet Room of the White House, Wednesday May 13, 2020 in Washington, DC. (Doug Mills-Pool/Getty Images)

BISMARCK, N.D. - Like many medical workers around the world, Fargo emergency room nurse Adam Johnston can’t escape the grim reality of the coronavirus pandemic. It follows him everywhere: at work, where people die every shift; at the grocery store, where people rail against his city's mask requirement; and at home, where he struggles to sleep.

He’s gotten through the long months, including North Dakota's current virus wave that is among the worst in the U.S., by finding solace with fellow nurses during brief breaks where they can swap tips on beating insomnia or just vent frustrations. But he and many other nurses fear things are about to get even harder now that Gov. Doug Burgum has allowed the state's beleaguered hospitals to use infected but asymptomatic workers to treat COVID-19 patients.

“It’s going to make you question every time you want to sit down and grab a five-minute snack with one of your co-workers,” said Johnston, who is the president of the state’s Emergency Nurses Association. “You’re always going to think, ‘Am I 6 feet away from them? Am I safe? Am I not?’”

Burgum said his decision could help North Dakota's hospitals, which are at or near capacity after a surge in cases that began over the summer and has only gotten worse. But Johnston and many other nurses feel he's saddling them with yet another burden while resisting imposing common safeguards to stanch the spread of the virus that might be less politically palatable in the conservative state.

Members of the National Nurses United union held up photos of the deceased in hopes that the images would resonate with federal and state leaders.

Like some of his Republican counterparts in other states that have had big spikes in COVID-19 cases, Burgum for months took a business-friendly approach that puts the responsibility for slowing the virus on individuals rather than government mandates, so as to protect “both lives and livelihoods.” It wasn't until Friday that he finally relented and ordered a statewide mask mandate and certain restrictions on businesses and gatherings.

The hands-off approach didn't work. After avoiding the explosion of cases that many other states experienced early in the pandemic, the virus has run rampant in North Dakota, which now regularly breaks its daily record highs for cases and deaths.

RELATED: Anthony Fauci predicts when America will return to normal from coronavirus

Burgum's move, which is permitted under Centers for Disease Control and Prevention guidelines, reflects the scarcity of medical workers in one of the hardest-hit regions of the country, said Dr. Thomas Tsai, an assistant professor at Harvard’s School of Public Health. He said hospitals across the country are weighing such options as case numbers soar.

That's the case in South Dakota, which allows the practice but where none of the major hospitals are currently using infected workers.

In the spring and early summer in places like New York, medical workers from around the country were able to fly in and volunteer, providing relief for hospitals. But Tsai said the virus is now so widespread that there is little hope for such relief in North Dakota.

The state’s major hospitals pushed Burgum’s administration to allow them to have infected but asymptomatic staffers treat COVID-19 patients.

“We applaud the governor for another tool we can use,” said Michael LeBeau, the head of Sanford Health Bismarck, which is developing protocols to allow such employees to work in a dedicated COVID-19 unit after it’s found to be safe for its employees and patients. He said he expects his hospital's hundreds of health care workers to support the move once adequate safeguards are in place.

But Tessa Johnson, who heads the North Dakota Nurses Association, said the group surveyed hundreds of its members this week and “we are not at all thrilled” with the decision.

“I know nurses who leave work every day and cry in their car before they go home to see their kids,” said Johnson. “I don’t know how much more we can take.”

Under the CDC guidelines, asymptomatic infected medical workers who intend to treat COVID-19 patients must take their temperatures before every shift and confirm that they don't have any symptoms. Workers with even mild symptoms aren't allowed to treat patients.

Dr. Marcus Plescia, the chief medical officer with the Association of State and Territorial Health Officials, pointed out that hospitals will have to determine if naming employees with infections is a violation of HIPAA laws, though he said that rigorous use of protective equipment in COVID units should prevent infections from spreading between hospital staff, even if co-workers don’t know who is infected.

But the rule change also could place internal and external pressure on infected staff members to work when they should be home recovering, Plescia said.

Many nurses say they're already at a breaking point, and some are starting to feel hopeless.

“We’re getting stretched so thin and there is no end in sight," said Kami Lehn, a nurse at a hospital in Fargo, which is North Dakota’s largest city and which last month adopted its own mask requirement, though it doesn't penalize non-compliance. "We don’t know how long this is going to last, or if it’s at its peak or if it’s going to get worse.”

The grief is the toughest part, she said.

“There is a lot of loss that is hard to take," she said. “Families drop off a loved one at the door thinking things are going to be OK, and sometimes they’re not.”

Health workers worry that even if asymptomatic infected colleagues are limited to COVID-19 units, they could still spread the disease in break rooms, cafeterias, restrooms and other shared areas.

Kristin Roers, a hospital administrator and Republican state senator from Fargo, said Burgum's move will help hospitals continue to care for patients. But she also acknowledged that it presents a dilemma for hospital staff. Roers, who is also a registered nurse, has increasingly been working with patients because staffing has gotten so thin.

“I can totally understand the trepidation,” she said. “But I mean, what do you do when there is nobody left to care for patients?”