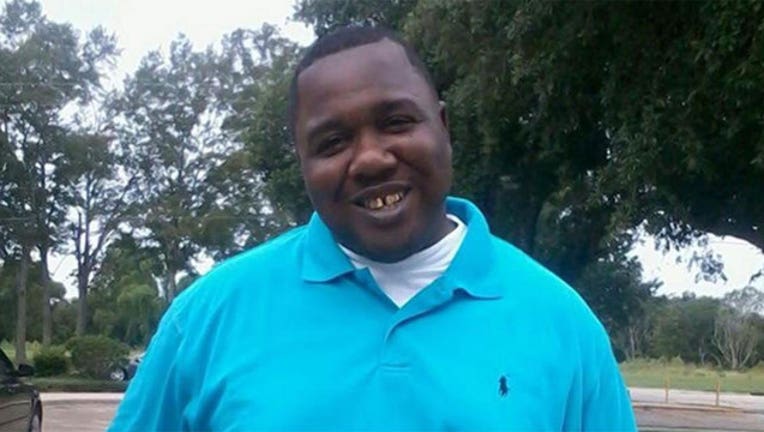 Alton Sterling, 37, was shot dead by police after a confrontation outside a grocery store in Baton Rouge, Louisiana. (Facebook)

Landry made the announcement of no charges against the officers at a news conference after meeting with family members of Sterling. Relatives and their lawyers angrily denounced the decision.

Quinyetta McMillon, the mother of one of Sterling's children, Cameron, said the officers killed Sterling "in cold blood."

Landry said his office reviewed all of the evidence compiled by the Justice Department and also conducted its own interviews of witnesses.

"I know the Sterling family is hurting," Landry told reporters. "I know that they may not agree with the decision."

Toxicology and urine test results released Tuesday showed Sterling had cocaine, methamphetamine, fentanyl and other drugs in his system at the time of the confrontation. Landry said it was "reasonable" to conclude Sterling was under the influence of drugs during the struggle with the officers "and that contributed to his non-compliance" with their commands.

Landry did not take any questions from reporters.

A lawyer for two of Sterling's five children slammed the report as biased. L. Chris Stewart said investigators did not follow up with witnesses and relied heavily on two outside experts who reviewed evidence collected by federal investigators. He also criticized the decision to put Sterling's criminal history into the report, which he said had nothing to do with the case.

The officers' body cameras and a store surveillance camera also recorded the encounter. Those videos haven't been released, but Baton Rouge Police Chief Murphy Paul said he intends to release both after he concludes the disciplinary process for the two officers, who have remained on paid administrative leave since the July 5, 2016, shooting.

Paul said he hopes to complete the disciplinary process by Friday. Salamoni's attorney, John McLindon, said he expects his client to be fired and called it "grossly unfair" that a disciplinary hearing is planned less than a week after the end of the criminal investigation.

"I believe it's a foregone conclusion," McLindon said. "The decision has already been made."

"It hurts, though, to see them get away and go on with their lives," Dunn said.

State and federal authorities said Salamoni yelled that Sterling was reaching for a gun in his pocket before shooting him three times, and then fired three more shots into Sterling's back when he began to sit up and move. A 34-page report by Landry's office said it's "important to note" that Sterling's hands were concealed from the officers as he sat up and rolled away from Salamoni.

The officers recovered a loaded revolver from Sterling's pocket. As a convicted felon, Sterling could not legally carry a gun.

Video footage shows Sterling threatening someone with a firearm before the officers responding to a report of a man with a gun outside the Triple S Food Mart, according to Landry's report.

The officers told Sterling to put his hands on the hood of a car and struggled with him when he didn't comply, Landry's office said. Sterling continued to resist after Salamoni drew his weapon and threatened to shoot him in the head if he didn't stop moving, according to Landry's report. Lake shocked Sterling with a stun gun twice before the officers wrestled him to the ground, investigators said.

Federal authorities concluded there wasn't enough evidence to prove Salamoni or Lake willfully deprived Sterling of his civil rights, or that the officers' use of force was objectively unreasonable.

The shooting came amid increased scrutiny of fatal encounters between police and black men. The next day Philando Castile was shot and killed in Minnesota by police officer and the aftermath was streamed on Facebook by his girlfriend. The same week, five police officers were killed in Dallas during a protest against police shootings.

Last year, lawyers for Sterling's five children filed a wrongful death lawsuit against the city of Baton Rouge, its police department and former police chief, and the two officers involved. Their suit alleges the shooting fit a pattern of racist behavior and excessive force by the Baton Rouge police.