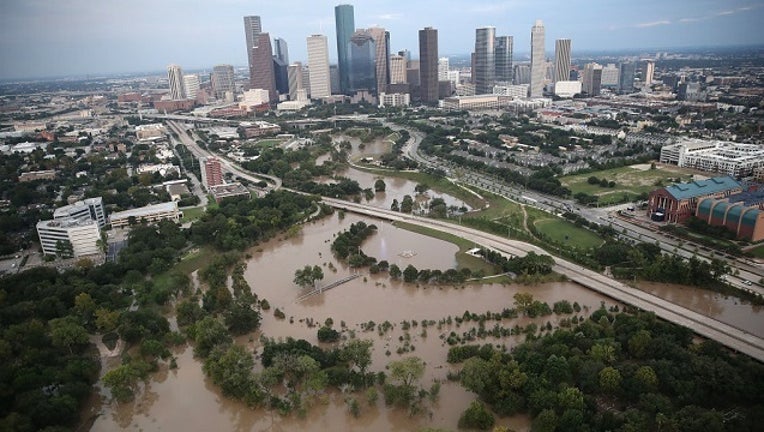 HOUSTON (AP) - The groups helping to rebuild on the Texas Gulf Coast after Hurricane Harvey have collected close to $1 billion in donations, according to an Associated Press tally of major national and local organizations.

Much of that money is already being put to work after Harvey, which ravaged cities in Southeast Texas in August with high winds before dumping record amounts of rain on the rest of the coast, including Houston, the nation's fourth-largest city.

Here is a look at the fundraising picture after Harvey:

Of the $928 million raised by major groups involved in the recovery, the most money has been collected by the Red Cross, which said this month that it's raised $493 million for Harvey relief.

The online campaign by Houston Texans star J.J. Watt raised $37 million, and both the Salvation Army and a fund created by the government of Qatar have each pledged $30 million.

HOW IS THE MONEY BEING SPENT?

At least 40 percent of the total amount has been spent or distributed so far, though some groups could not confirm how much they had disbursed for the AP's tally. Several major groups say they're planning to announce new recipients of aid this month and in January.

Most of the other funds are helping smaller organizations that directly manage the cases of individual people in need or provide housing, job training, new furniture or mental health assistance. The Greater Houston Community Foundation has distributed at least $36 million to local groups so far, with plans for a new round of grants in January focused on housing.

"We're trying to balance a sense of great urgency to make sure people who need help are getting it rapidly, while at the same time a sense of care and responsibility to our donors to ensure that the funds are being spent effectively and efficiently," said Renee Wizig-Barrios, the foundation's senior vice president.

ARE THE GROUPS WORKING TOGETHER?

Coordination between groups working to resolve a crisis is key, say experts on disaster recovery and people who were part of the rebuilding after disasters such as Hurricane Katrina and Superstorm Sandy.

Many of Houston's major aid groups have met twice so far to discuss priorities and the work they're doing. But the Red Cross was not invited to those two meetings, even though it has raised the most money. A spokeswoman for the Houston Endowment, which convenes the meetings, said the Red Cross wasn't included because the meetings are for groups that will make grants to local nonprofits.

Houston Mayor Sylvester Turner and Texas Gov. Greg Abbott have both criticized the Red Cross publicly. Abbott said in November that he was concerned that money given to the Red Cross "was not getting into the hands of the people who need it."

A Red Cross spokesman said this month that the group has "active collaborative efforts" with other organizations. The Red Cross has publicly committed that 91 cents of every dollar raised will go toward recovery work, though the organization has been sharply criticized for perceived misspending after the Haiti earthquake and Superstorm Sandy.

WILL NONPROFIT AID BE ENOUGH?

By all accounts, no. Local and state officials say that while donor funds can help fill in gaps and immediately help people in need, most of the support for Texas' rebuilding will have to come from the Federal Emergency Management Agency and other U.S. government agencies.

FEMA says it has approved about $1.5 billion in funding so far for almost 900,000 people in Texas. Many thousands more are still waiting for an answer on their applications for disaster aid, or starting to file appeals of denials for help.

The U.S. House on Thursday passed an $81 billion disaster aid package for hurricane-hit Texas, Florida, and Puerto Rico, along with regions of California ravaged by recent wildfires. The Senate isn't expected to vote until next month.

Associated Press journalists Juan A. Lozano in Houston and Paul J. Weber in Austin, Texas, contributed to this report.