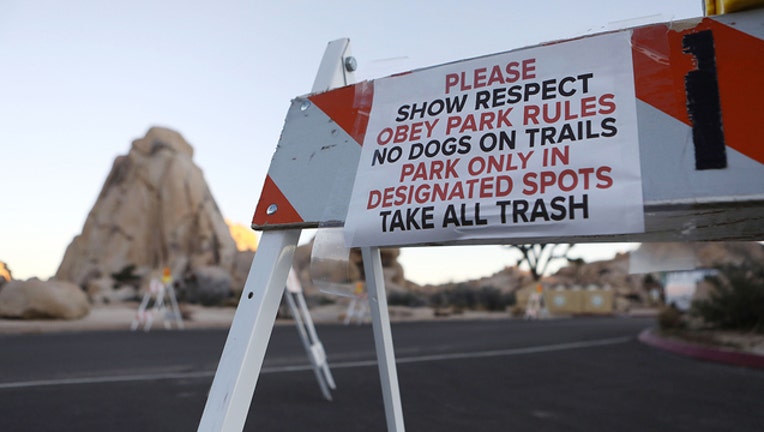 SALT LAKE CITY (AP) - National park visitors cut new trails in sensitive soil. They pried open gates while no one was watching. They found bathrooms locked, so they went outside. One off-roader even mowed down an iconic twisted-limbed Joshua tree in California.

During the 35-day government shutdown, some visitors to parks and other protected areas nationwide left behind messes and repairs that National Park Service officials are scrambling to clean up and repair as they brace for the possibility of another closure ahead of the busy Presidents Day weekend this month.

Conservationists warn that damage to sensitive lands could take decades to recover. Even before the shutdown, national parks faced an estimated $12 billion maintenance backlog that now has grown.

Many of the parks went unstaffed during the shutdown, while others had skeleton crews with local governments and nonprofits contributing money and volunteers.

National Park Service spokesman Mike Litterst in Washington, D.C., declined to provide a full accounting of the damage at more than 400 locations, saying it was isolated and most visitors took good care of the land.

But interviews with park officials and nonprofits that help keep parks running reveal a toll from people and winter storms when workers could not make fixes quickly.

President Donald Trump has said another shutdown could start Feb. 15 if he and Democratic leaders can't agree on funding for a U.S.-Mexico border wall, compounding pressure on the park service to catch up on repairs.

Hiring seasonal workers who typically start in the spring as rangers, fee collectors and hiking guides also has been delayed.

Grand Canyon National Park officials said Friday they are is delaying the start of a highly competitive lottery to award permits for self-guided rafting trips on the Colorado River in 2020 because staff had work to catch up on after the shutdown. Matt Baldwin, who works with the park's river permits office, said the lottery is rescheduled for Feb. 16, a date that could be changed if another shutdown occurs.

"We're kind of ready to just have a bit more stability," said Angie Richman, a spokeswoman at Arches National Park in Utah.

Arches visitors left human waste outside a restroom, stomped out five trails in a permit-only area that was shut down and damaged an entrance gate to allow vehicles to drive on snow-covered roads when the park was closed after a storm, Richman said.

In some places, less oversight meant animals moved in.

A colony of elephant seals took over a Northern California beach in Point Reyes National Seashore without workers to discourage the animals from congregating in the popular tourist area. Rangers and volunteers will lead small groups of visitors to the edge of a parking lot starting this weekend to safely see the seals and their pups.

At Joshua Tree National Park in Southern California, an off-road vehicle ran over one of the namesake trees and someone cut down a juniper tree, Superintendent David Smith said.

Several other Joshua trees were damaged, including one that was spray-painted, but the park has yet to determine the exact number, he said. Off-road vehicles also created extensive unauthorized trails, with wheel marks dug into the delicate desert soil nearly a foot deep in some spots, Smith said.

A time-lapse video on Death Valley's Facebook page showed how it took staffers two hours to clean a restroom overflowing with trash and splashed with waste. Crews also have to rake and replant vegetation to repair ruts from off-road vehicles, which delays work elsewhere in the 3.4 million-acre park.

"It became pretty depressing the kinds of things people will do when they are unsupervised," Blacker said.

"There are a lot of impacts that will be felt in the future that aren't being felt or even talked about now," he said.

Meanwhile, the prospect of another shutdown looms.

Grand Canyon National Park could miss out on its main centennial celebration Feb. 26 and other related events.

Elizabeth Jackson, a spokeswoman for Guadalupe Mountains National Park on the Texas-New Mexico border, noted the stress on workers.

"It's a way of life if you're a federal employee," Jackson said. "Not to be glib, but it's something we face every year."