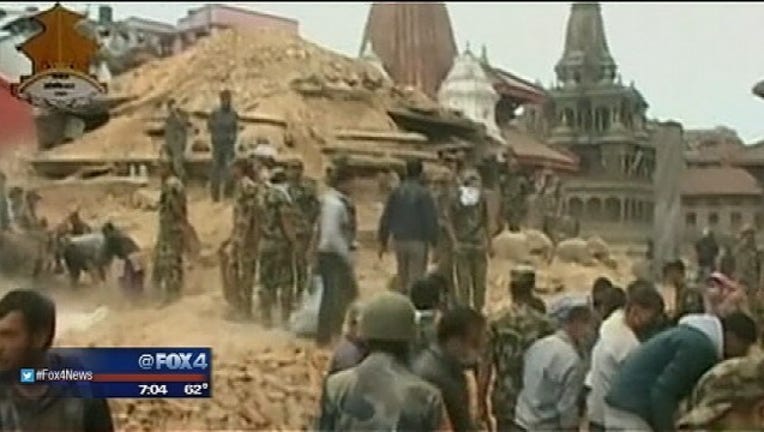 KATHMANDU, Nepal (AP) -- Sleeping in the streets and shell-shocked, Nepalese cremated the dead and dug through rubble for the missing Sunday, a day after a massive Himalayan earthquake killed more than 2,200 people. Aftershocks tormented them, making buildings sway and sending panicked Kathmandu residents running into the streets.

The cawing of crows mixed with terrified screams as the worst of the aftershocks -- magnitude 6.7 -- pummeled the capital city. It came as planeloads of supplies, doctors and relief workers from neighboring countries began arriving in this poor Himalayan nation. No deaths or injuries were reported from the early Sunday afternoon quake, but it took an emotional toll.

"The aftershocks keep coming ... so people don't know what to expect," said Sanjay Karki, Nepal country head for global aid agency Mercy Corps. "All the open spaces in Kathmandu are packed with people who are camping outdoors. When the aftershocks come you cannot imagine the fear. You can hear women and children crying."

Saturday's magnitude 7.8 earthquake spread horror from Kathmandu to small villages and to the slopes of Mount Everest, triggering an avalanche that buried part of the base camp packed with foreign climbers preparing to make their summit attempts. At least 17 people died there and 61 were injured.

The earthquake centered outside Kathmandu, the capital, was the worst to hit the South Asian nation in over 80 years. It destroyed swaths of the oldest neighborhoods of Kathmandu, and was strong enough to be felt all across parts of India, Bangladesh, China's region of Tibet and Pakistan.

By Sunday afternoon, authorities said at least 2,169 people had died in Nepal alone, with 61 more deaths in India and a few in other neighboring countries. At least 721 of them died in Kathmandu alone, and the number of injured nationwide was upward of 5,000. With search and rescue efforts far from over, it was unclear how much the death toll would rise.

But outside of the oldest neighborhoods, many in Kathmandu were surprised by how few modern structures -- the city is largely a collection of small, poorly constructed brick apartment buildings -- collapsed in the quake. While aid workers cautioned that many buildings could have sustained serious structural damage, it was also clear that the death toll would have been far higher had more buildings caved in.

Aid workers also warned that the situation could be far worse near the epicenter. The U.S. Geological Survey said the quake was centered near Lamjung, about 80 kilometers (50 miles) northwest of Kathmandu, in the Gorkha district.

Roads to that area were blocked by landslides, hindering rescue teams, said chief district official Prakash Subedi. Teams were trekking through mountain trails to reach remote villages, and helicopters would also be deployed, he said by telephone.

Local aid worker Matt Darvas said in a statement issued by his group, World Vision, that he heard that many remote mountain villages near the epicenter may have been completely buried by rock falls.

The villages "are literally perched on the sides of large mountain faces and are made from simple stone and rock construction," Darvas said. "Many of these villages are only accessible by 4WD and then foot, with some villages hours and even entire days' walks away from main roads at the best of times."

Nepal's worst recorded earthquake in 1934 measured 8.0 and all but destroyed the cities of Kathmandu, Bhaktapur and Patan.

With people fearing more quakes, tens of thousands of Nepalese spent Saturday night outside under chilly skies, or in cars and public buses. They were jolted awake by strong aftershocks early Sunday.

"There were at least three big quakes at night and early morning. How can we feel safe? This is never-ending and everyone is scared and worried," said Kathmandu resident Sundar Sah. "I hardly got much sleep. I was waking up every few hours and glad that I was alive."

As day broke, rescuers aided by international teams set out to dig through rubble of buildings -- concrete slabs, bricks, iron beams, wood -- to look for survivors.

In the Kalanki neighborhood of Kathmandu, police rescuers finally extricated a man lying under a dead body, both of them buried beneath a pile of concrete slabs and iron beams. Before his rescue, his family members stood nearby, crying and praying. Police said the man's legs and hips were totally crushed.

Hundreds of people in Kalanki gathered around the collapsed Lumbini Guest House, once a three-story budget hotel and restaurant frequented by Nepalese. They watched with fear and anticipation as a single backhoe dug into the rubble.

Police officer RP Dhamala, who was coordinating the rescue efforts, said they had already pulled out 12 people alive and six dead. He said rescuers were still searching for about 20 people believed to be trapped, but had heard no cries, taps or noises for a while.

Most areas were without power and water. The United Nations said hospitals in the Kathmandu Valley were overcrowded, and running out of emergency supplies and space to store corpses.

Plumes of smoke, meanwhile, rose above the capital as friends, relatives and others gathered by the river to quickly cremate loved ones' remains.

Most shops in Kathmandu were shut; only fruit vendors and pharmacies seemed to be doing business.

"More people are coming now," fruit seller Shyam Jaiswal said. "They cannot cook so they need to buy something they can eat raw."

Jaiswal said stocks were running out, and more shipments were not expected for at least a week, but added, "We are not raising prices. That would be illegal, immoral profit."

The quake will likely put a huge strain on the resources of this impoverished country best known for Everest, the highest mountain in the world. The economy of Nepal, a nation of 27.8 million people, relies heavily on tourism, principally trekking and Himalayan mountain climbing.

With Kathmandu airport reopened, the first aid flights began delivering aid supplies. The first to respond were Nepal's neighbors -- India, China and Pakistan, all of which have been jockeying for influence over the landlocked nation. Nepal remains closest to India, with which it shares deep political, cultural and religious ties.

India suffered its own losses from the quake, with at least 61 people killed there and dozens injured. Sunday's aftershock was also widely felt in the country, and local news reports said metro trains in New Delhi and Kolkata were briefly shut down when the shaking started.

After the chaos of Saturday -- when little organized rescue and relief was seen -- there was more order on Sunday as rescue teams fanned out across the city.

Workers were sending out tents and relief goods in trucks and helicopters and setting up shelters, said disaster management official Rameshwar Dangal. Mukesh Kafle, the head of the Nepal Electricity Authority, said power was restored to main government offices, the airport and hospitals.

Among the destroyed buildings in Kathmandu was the nine-story Dharahara Tower, a Kathmandu landmark built by Nepal's royal rulers as a watchtower in the 1800s and a UNESCO-recognized historical monument. It was reduced to rubble and there were reports of people trapped underneath.

Nepali journalist and author Shiwani Neupane tweeted: "The sadness is sinking in. We have lost our temples, our history, the places we grew up."