Montana hit by ‘unprecedented’ September winter storm, piling over 4 feet of snow in some areas

Temperatures dipped across the Rocky Mountains of Montana on Monday, causing the governor to declare an emergency.

HELENA, Mont. - Temperatures dipped across the Rocky Mountains of Montana on Monday, causing the governor to declare an emergency and call it an “unprecedented winter storm.”

Residents in Montana dug out from a wintry blast that left several feet of snow, with some areas suffering from over 4 feet of the frozen powder.

“With an unprecedented winter storm throwing our state a surprise in September, state and local governments are working closely together to protect the health and safety of Montanans and our top priority is making sure that happens,” Montana Governor Steve Bullock said in an announcement. “Montanans should heed all warnings from state and local officials, travel safely, and be cautious during this time.” 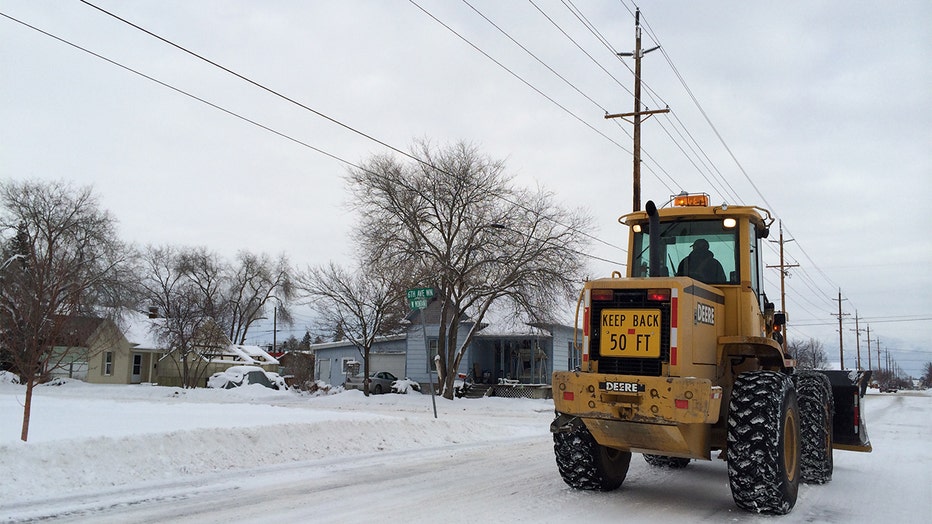 FILE: A snowplow is clearing the roads in Montana. (Photo by Elizabeth Ruth Moehlmann/Contributor/Moment Mobile ED via Getty Images)

Freeze warnings were in effect in parts of Utah, Idaho and Wyoming, with temperatures forecast to drop into the teens and 20s. The cold set in with the lingering fall storm system that dumped snow for three days across much of central and western Montana, including over 4 feet on the Blackfeet Reservation.

"Winter storm warnings and advisories remain in effect for much of North-Central Montana through Monday morning," the National Weather Service told NPR.

The NWS said in a statement on Facebook that the 9.6 inches of snow Sunday at Great Falls is “a new daily record” for Sept. 29, and is the second highest ever one-day September snow amount, falling just behind Saturday’s 9.7 inches.

The declaration allows the state to mobilize resources to help affected areas.

“We were fortunate to receive several days of notice from the National Weather Service – which did a good job predicting the size and magnitude of this storm,” Bullock said.

Augusta school superintendent Matt Genger said the decision to close down on Monday was made because of the treacherous roads.

"I think our furthest student is 30 miles away," he said.

Genger said he doesn't remember any other snow day occurring this early in the school year. The only school closure in September that he could recall was for a wildfire in the mid-1980s when the Red Cross and U.S. Forest Service needed a staging area and shelter.

Blackfeet and Pondera emergency officials on Sunday requested all non-emergency vehicles stay off the roads until further notice.

Snow drifts shut down the U.S.-Canada border crossing at U.S. Highway 89, where state transportation officials also reported that 200 head of cattle were on the roadway. A vehicle accident slowed traffic on Interstate 15 and several surrounding state highways were closed because of the snow.

While parts of the Rockies were dealing with frigid temperatures and unusually early snow, extreme wildfire danger warnings emerged in eastern Utah and much of Colorado on Monday, where temperatures as high as the mid-80s, along with gusty winds and dry air were expected to create critical fire conditions.

The NWS issued both freeze warnings and extreme wildfire danger warnings in Utah. The hard-freeze warnings in the western part of the state are expected to last until Tuesday, meaning outdoor plumbing and crops that have no protection could sustain significant damage.

The fire warning is in the eastern part of the state near Moab through Monday evening.