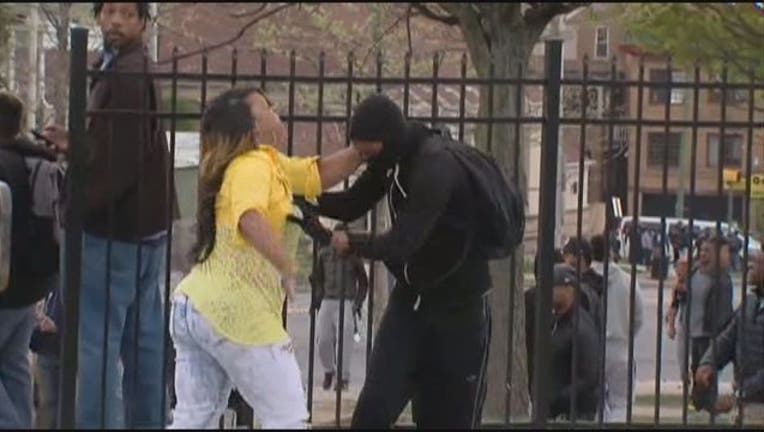 BALTIMORE (AP) - A mother who was caught on video smacking her 16-year-old son around after he threw objects at police said when they made eye contact, he knew he was in trouble.

"I'm a no-tolerant mother. Everybody that knows me, know I don't play that," Toya Graham, a single mother of six, told CBS News. "He said, when 'I seen you,' he said, 'ma, my instinct was to run.'"

Graham received wide praise from people on social media and even the Baltimore police commissioner, who said more parents should have taken charge of their children like Graham after the riots started.

Graham said she saw her only son wearing a hoodie and mask amid the protesters demonstrating just hours after a funeral for Freddie Gray, a black man who died after suffering an unexplained spinal injury in police custody.

"At that point, I just lost it," she said. "I was shocked, I was angry, because you never want to see your child out there doing that."

Graham said she and her son watched news coverage of the riots together. And then the images of her reaction went viral. Comments started appearing on her son's Facebook page, many in support of her, she said.

"Friends and everybody making comments and saying, 'you know, you shouldn't be mad at your mother, you should give her a hug,'" Graham said.

She hopes it will be a teachable moment.

"And by him seeing everything what's going on I just hope, I'm not sure, but I hope that he understands the seriousness of what was going on last night," she said.