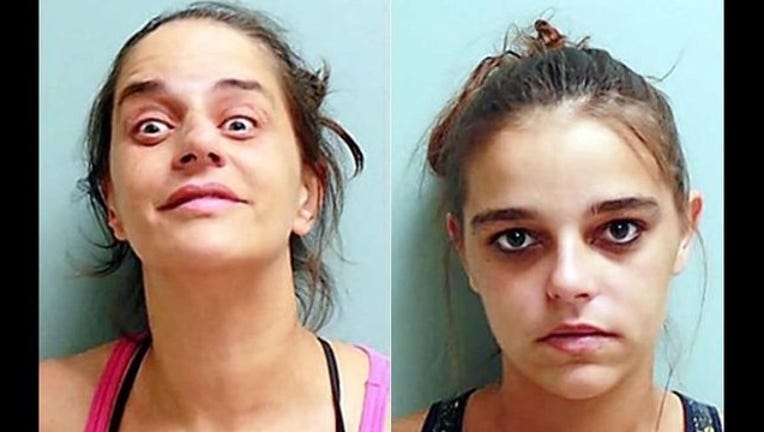 GREENSBURG, PA (WTXF) -- A mother-daughter duo were arrested in western Pennsylvania after a Children and Youth Services worker allegedly witnessed them shooting heroin inside a car with a baby girl in the backseat, the Daily Mail reports.

Police say that 23-year-old Courtney Jording was caught injecting heroin in her mother, 43-year-old Karen Gillepsie by the unidentified employee. The two were reportedly inside a vehicle parked at a Sheetz gas station.

The six-month-old baby in the backseat – believed to be Jording’s daughter – was sitting, unsecured, in a car seat in the back of the vehicle during the incident, according to Daily Mail. They also report that the baby was wearing a soiled diaper.

The Pittsburgh Post-Gazette reports that Jording and Gillespie have been charged with several drug counts, criminal conspiracy, and endangering the welfare of a child.

They both are being held in Westmoreland County Prison in Greensburg, Pennsylvania on $10,000 straight bond.

Police say that the incident occurred around 11:15 a.m. on Wednesday.

“The daughter was shooting heroin into the mother’s arm while at the gas pumps,” Police Captain Chad Zucco told KDKA. He also said that the employee noticed a baby seated in the back of the car.

“The car seat was not secured,” he said. “[The girl] was just sitting in the back seat; further, the child had a wet diaper. They looked in the car to find diapers for the baby and there were none.”

Zucco also spoke to WPXI.com and said that he was grateful the mother and daughter were caught before they drove away and could have potentially hurt someone.

“We're thankful that we got there quick and were able to stop them quick before they got back on the road and hurt somebody or hurt the baby or anybody else,” he said to WPXI.com.

Gillespie faces additional charges according to Daily Mail including possession with the intent to manufacture or deliver.

Family members say that Jording and the baby girl currently reside in New Jersey. The baby is now reportedly being cared for by her paternal grandparents.