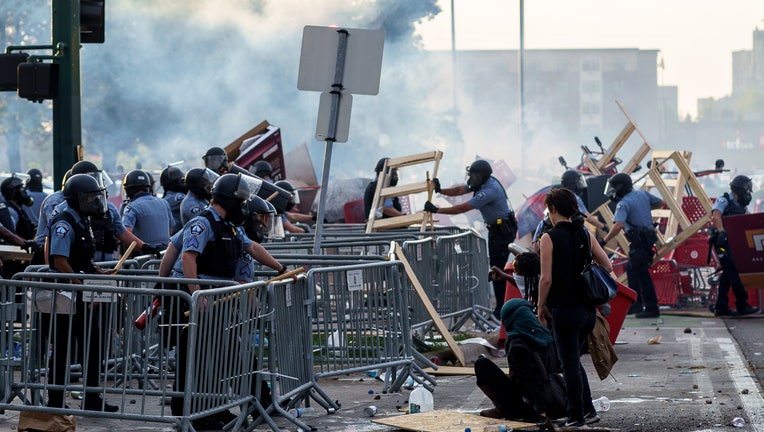 Police remove barricades set by protesters during a demonstration over the killing of George Floyd by a policeman outside the Third Police Precinct on May 27, 2020 in Minneapolis, Minnesota. - Demonstrators gathered on May 27 for a second night of pr

(FOX 9) - Minnesota Gov. Tim Walz activated the Minnesota National Guard Thursday to help restore calm in the Twin Cities amid escalating unrest over the death of George Floyd, who died in the custody of Minneapolis police on Memorial Day.

According to a news release, the National Guard Adjutant General will work with local government agencies to provide personnel, equipment and facilities needed “to respond to and recover from this emergency.”

According to a news release, the National Guard Adjutant General will work with local government agencies to provide personnel, equipment and facilities needed

Minneapolis Mayor Jacob Frey asked the Walz to deploy the National Guard after protests turned violent Wednesday night, devolving into looting and rioting that has continued into Thursday and spread to St. Paul and surrounding suburbs.

Walz announced his decision shortly after 4 p.m. Thursday after a day-long discussion within his administration. The governor has not spoken publicly about the unrest in the state's biggest city in more than 24 hours, since the previous afternoon.

Mobilizing the National Guard is no easy task: the Guard is not a full-time military force, and many of its members live outstate. It's the first time the National Guard has been activated for a civil disturbance since 2008, when then-Gov. Tim Pawlenty called them up for the Republican National Convention in St. Paul.

Frey's request was met with backlash from some in the community. The Minneapolis NAACP tweeted that the Guard "is not needed" and that police needed to deescalate the unrest.

"The community has been traumatized because of law enforcement so continuing to add more and more law enforcement on that may not be the way to go. However, I do want people to be safe," Hayden, DFL-Minneapolis, told reporters Thursday.

In addition to National Guard soldiers, Walz said the Minnesota State Patrol will send 200 troopers to assist with public safety efforts over the next few days. Approximately 50-60 troopers were already in Minneapolis last night, according to a spokesperson for the governor’s office.

"As the SEOC is already activated due to the COVID-19 pandemic, it will concurrently support the COVID-19 response and the City of Minneapolis and surrounding communities during this situation," according to a news release.