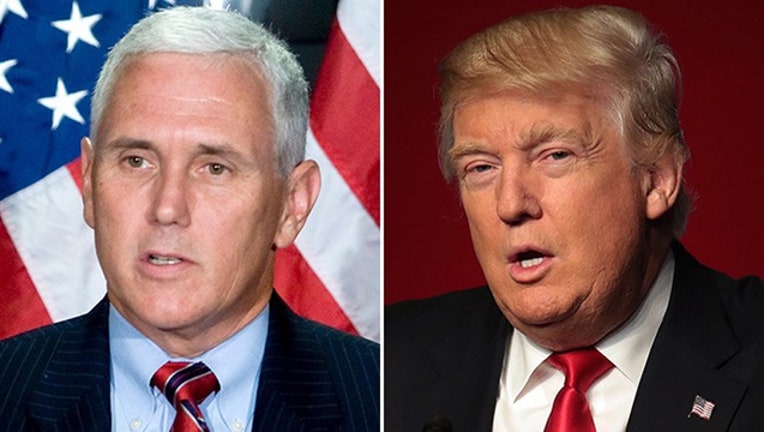 INDIANAPOLIS (AP) — As a conservative talk-radio host in the 1990s, Mike Pence described himself as "Rush Limbaugh on decaf."

Two decades later, Pence is the unflappable conservative governor of Indiana who's being plucked by Republican presidential contender Donald Trump as his running mate.

Where Trump is impulsive, Pence is cool-headed. Where Trump makes conservatives suspicious, Pence has credibility. And where Trump struggles to draw evangelical Christians, Pence is well-regarded by them.

A favorite quote highlights how Pence might smooth some of the sharp corners of the Trump campaign and its supporters.

The former congressman also is a proven fundraiser with close ties to billionaire industrialists David and Charles Koch and their network of wealthy donors, many of whom have been dismissive of Trump.

"One thing you can say about Mike Pence is he's got a very calm, steady demeanor that in some ways is a little Reaganesque," said Christine Mathews, a Republican pollster for former Indiana Gov. Mitch Daniels. "He's a counterbalance to Trump in that way."

Trump announced on Twitter Friday morning that he's selected Pence as his running mate, capping a wild 24 hours of speculation interrupted by the truck attack in Nice, France, that left scores dead.

Not so long ago, their relationship was a little awkward. Trump met privately with Pence before Indiana's primaries, seeking his endorsement. Instead, Pence, under pressure from national conservatives, tepidly endorsed Trump's rival, Texas Sen. Ted Cruz, while still lavishing praise on Trump. Trump won that primary. Before the night was over, Cruz had quit the race.

For Pence, a former six-term congressman, Trump's selection offers a return to national politics after his embrace as governor of conservative social issues sidelined his own presidential ambitions. Pence describes himself as "a Christian, a conservative and a Republican, in that order." In 2015 he provoked a national backlash after signing a law that critics said would have allowed businesses to deny service to gay people for religious reasons.

Even some Indiana Republicans have questioned his decisions, suggesting Pence has at times seemed more interested in appealing to national conservatives than doing what's best for the state. Pence's support of the state's religious objections law led to a revolt from the business community, which joined gay rights advocates in successfully pushing for changes to the law.

Raised in Columbus, Indiana, in an Irish-Catholic family, Pence revered the Kennedys growing up and has said he voted for Jimmy Carter in 1980. He later identified as an evangelical Christian and was inspired to join the Republican Party by former President Ronald Reagan, whose "happy warrior" rhetorical style Pence has since tried to emulate.

After attending Hanover College, Pence graduated from Indiana University Law School in 1986. He met his wife, Karen, around the same time and twice unsuccessfully ran for Congress before taking a job at Indiana Policy Review, a conservative think-tank. In a 1991 essay titled "Confessions of a Negative Campaigner," Pence swore off harsh political tactics he used in "one of the most divisive and negative campaigns in Indiana's modern congressional history" while calling for "basic human decency."

"That means your First Amendment rights end at the tip of your opponent's nose — even in the matter of political rhetoric," Pence wrote, though he backtracked in the face of a difficult re-election campaign in Indiana.

In Congress, Pence sponsored a few bills that became law as amendments in other legislation. But he built a national following among conservatives for his willingness to buck his own party after opposing President George W. Bush's Medicare expansion and the No Child Left Behind education overhaul. During the early years of President Barack Obama's administration, Pence helped lead the opposition to the Democrat's agenda.

"He has a particularly strong talent, a gift if you will, for being able to stick to principle while making his political opponents or those who disagree with him feel like they are being heard and respected," said Ryan Streeter, a former Pence aide and George W. Bush staffer who is now a public affairs professor at the University of Texas.

Pence's congressional experience is one trait that Trump, who has never held public office, wanted in a running mate.

Pence's one term as governor has drawn mixed reaction, and he has managed to alienate moderate Republicans over social issues.

This year Pence clashed with the local Catholic archdiocese by opposing the settlement of Syrian refugees in Indianapolis.

Pence was also slammed for the planned 2015 launch of "JustIN," a state-operated news service that was ditched after critics panned it as "Pravda on the Plains."

But he has also presided over Indiana's improving economy and plummeting unemployment rate, which Republicans credit to the state's low taxes, limited regulation and pro-business climate.