U.S. Magistrate Judge Bruce Reinhart on Thursday ordered some of the documents connected to the FBI raid on Trump’s Mar-a-Lago estate to be unsealed. Reinhart has reportedly given the government one week to submit proposed redactions under seal by noon on August 25th.

Former Vice President Mike Pence said Friday that he didn’t take any classified information with him when he left office.

The disclosure — which would typically be unremarkable for a former vice president — is notable given that FBI agents seized classified and top secret information from his former boss's Florida estate on Aug. 8 while investigating potential violations of three different federal laws. Former President Donald Trump has claimed that the documents seized by agents were "all declassified."

Pence, asked directly if he had retained any classified information upon leaving office, told The Associated Press in an interview, "No, not to my knowledge."

Despite the inclusion of material marked "top secret" in the government’s list of items recovered from Mar-a-Lago, Pence said, "I honestly don’t want to prejudge it before until we know all the facts."

Pence was in Iowa on Friday as part of a two day-trip to the state, which hosts the leadoff Republican presidential caucuses. It comes as the former vice president has made stops in other early voting states as he takes steps toward mounting a 2024 White House campaign. 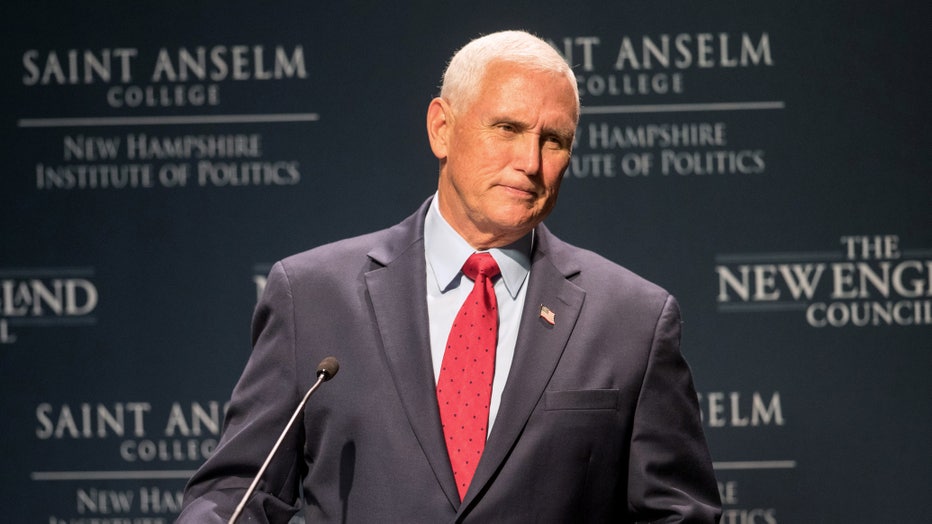 Pence also weighed in on Republican U.S. Rep. Liz Cheney's primary defeat earlier in the week to a rival backed by Trump. Cheney, who is arguably Trump's most prominent Republican critic, has called the former president "a very grave threat and risk to our republic" and further raised his ire through her role as vice chair of the House committee investigating the Jan. 6, 2021, insurrection at the U.S. Capitol.

"My reaction was, the people of Wyoming have spoken," said Pence, who was targeted at the Capitol that day by angry rioters, including some who chanted, "Hang Mike Pence!" "And, you know, I accept their judgment about the kind of representation they want on Capitol Hill."

"And I appreciate the conservative stance Congresswoman Cheney has taken over the years," Pence continued. "But I’ve been disappointed in the partisan taint of the Jan. 6 committee from early on."

Pence's aides said the committee contacted his legal team months ago to see if he would be willing to testify. Although Pence has said he would give "due consideration" to cooperating, he was adamant that the historic nature of such participation must be warranted and agreed upon.

"Beyond my concerns about the partisan nature of the Jan. 6 committee, there are profound constitutional issues that have to be considered," he said. "No vice president has ever been summoned to testify before the Congress of the United States."

Pat Cipollone: Pence should get Presidential Medal of Freedom for Jan. 6

Pat Cipollone, the former White House counsel to President Donald Trump, gave a deposition for the Jan. 6 House committee investigating the Capitol riot after months of asking him to come forward. During the testimony, Cipollone went out of his way to state how courageous he thought Vice President Mike Pence was for certifying the election, and told the committee that he felt Pence should be awarded the Presidential Medal of Freedom.

Speaking further about the search of Mar-a-Lago, the former vice president raised the possibility, as he has previously, that the investigation was politically motivated and called on Attorney General Merrick Garland to disclose more details on what led authorities to conduct the search.

"The concern that millions of Americans felt is only going to be resolved with daylight," Pence said Friday. "I know that's not customary in an investigation. But this is unprecedented action by the Justice Department, and I think it merits an unprecedented transparency."

The Jan. 6 insurrection marked the first in a number of public breaks between Trump and his once devout No. 2. But Pence has been careful not to alienate Republicans who have supported Trump but might be looking for another candidate in the 2024 election. Despite his reluctance to criticize the former president, Pence has occasionally spoken out against Trump, criticizing the attack at the U.S. Capitol and more recently urging his fellow Republicans to stop lashing out at the FBI over the search of Mar-a-Lago.

"The Republican Party is the party of law and order," Pence said Wednesday at a political breakfast in New Hampshire. "Our party stands with the men and women who stand on the thin blue line at the federal and state and local level, and these attacks on the FBI must stop."

Pence said Friday that he would make a decision early next year about whether to run for the White House, a move that his aides have said will be independent of what Trump decides to do.

Having visited the Iowa State Fair on Friday afternoon, Pence also headlined a fundraiser earlier in the day for Republican Sen. Chuck Grassley and was scheduled to speak to a Christian conservative group and a northern Iowa county Republican Party fundraiser before leaving Saturday.